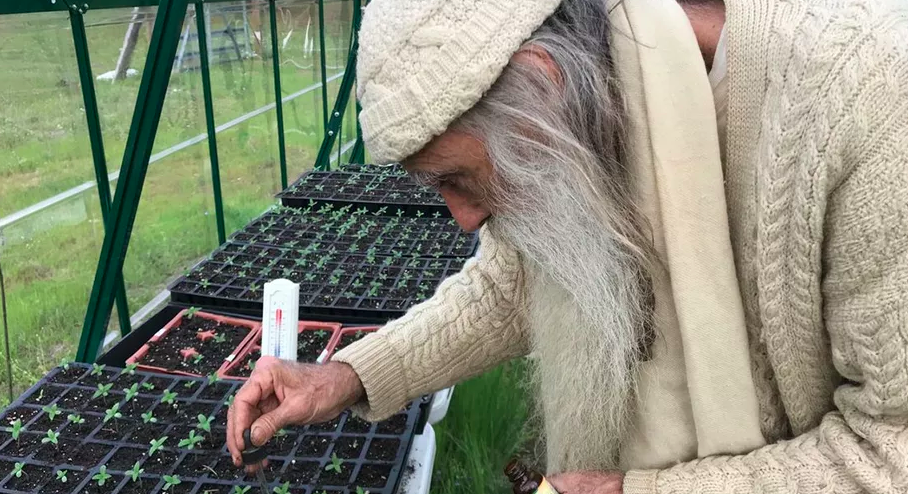 Our cultivator columnists realize that many city dwellers don’t know the ins and outs of how our favorite herb is grown, so Swami Select dove deep and put together this synopsis of the summer cycle.

This piece was originally published on MERRY JANE on May 24, 2018. All photos courtesy of Swami Select.

Nikki and I were talking the other day with a friend from New York who asked when our next cannabis harvest was about to start. Since it was late May at the time, and the sungrown harvest cycle doesn’t even begin until mid-September at the earliest, we realized that many city dwellers simply don’t have a clue about how their favorite herb is grown. Hence, for your continuing edification, here is Swami’s synopsis of the Cannabis Growth Cycle.

We grow from seeds, which means each spring we carefully select just the right strains for that year. Like a designer predicting what will be fashionable, we feel out what we think is the best of the best, what the discriminating connoisseur will want to smoke the following season. With seeds, as opposed to clones, you have to start with more than twice the number of plants you want to fully grow out, because about half will show as male. Cannabis is one of the few perennial plants which exhibits separate sex traits.

Fertilization occurs by the wind blowing the pollen dust from the male plant onto the waiting seed bracts of the mature female. There is always some variation in genetics, as each seed is the unique product of a male pollinating a female. Just like sisters with the same biological parents will have different colored hair or eyes or personality, plants grown from seeds are also bound to display differences. Clones, of course, will all be exactly alike. 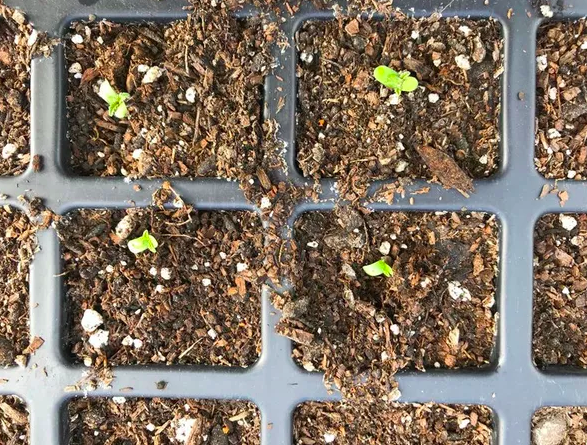 There are many ways to start the grow process with seeds, and I’ve tried most of them. This year, we first soaked the seeds in water in several jars overnight — on the waxing moon in the Earth sign of Virgo. Over the course of my farming experiences, I have come to believe that it does indeed make a difference if the seed process is initiated according to the waxing moon cycle; seeds are best begun in a “fertile” water or Earth sign rather than a “barren” fire or air sign.

After preparing a potting soil mixture, we fill it in pint-sized, plastic sprouting pots. I’ll poke a finger in the soil about ¾ of an inch deep, making an indentation where a seed is placed and gently tucked in. At Swami Select, there are certain rituals and blessings we perform for the plants to direct the intention of the flowers to physical healing, creative inspiration, and spiritual realization. To this end, I give each seed a drop of sacred water sourced from the Ganges River in India and chant a mantra in blessing. Any prayer or good wish will do, as it’s all about setting the intention on the crop to be holistic and uplifting.

One grower I knew always popped his seeds on Valentine’s Day. Another would start them under the dark of the moon in February/March during Sivaratri, a holiday in India devoted to Lord Siva, the cannabis-loving Lord of Yoga. Every year, I have been starting them later and later in the spring, waiting for the warm weather to kick in. This year we were so late in starting the seeds that it was already pleasant enough to put the trays of mini-pots outside on tables in the hoop house for sprouting. 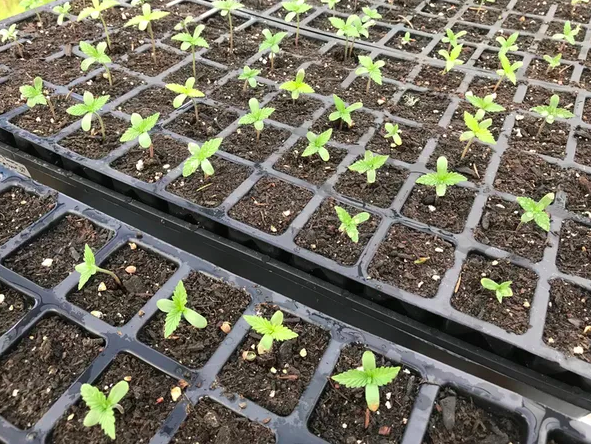 Next, we water the trays with a fine mister or — better yet — each tray of mini-pots gets dunked for about ten minutes in a larger tray of water until they’re well-soaked. Within a few days, the first pair of tiny, rounded green leaves will pop out and soon all the trays will have little green shoots. You can practically stand there and watch them grow. A day or so later, a second pair of leaves appear at a 90° angle to the first, but these are pointed with saw-tooth edges, like the typical cannabis leaf. A few days after that, another tier of leaves comes out, again at 90°, but now with three leaves each.

Everyday then, as the warm weather continues, the plants project up out of the soil and reach to the sun. Within two weeks, they grow up to five inches tall, and start to get a bit root-bound, suggesting that it’s time to transplant them to two and three gallon pots. We put more potting soil, mixed with organic manure, into the larger pots, while the infants are lovingly moved from their original homes to the larger digs to stretch their roots and start to really grow.

While all this is happening, the garden beds are being prepared. Actually, that work started at the end of the previous harvest in the fall, when we dug leftover stalks from the ground and broadcasted cover crop seeds onto the beds. These crops fix nitrogen on to their roots, which then becomes available for plant use later in the year, while also keeping the soil and the beneficial microbes alive through the winter. Other off season projects include gathering fallen tree branches (oak, not fir) to make wood chips, and raking leaves to be used as mulch that covers the beds. 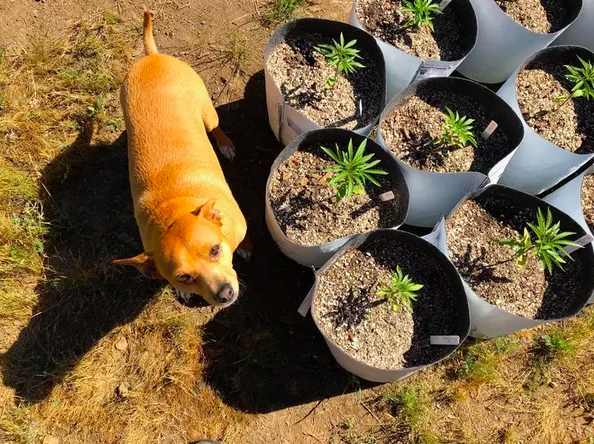 Farming, no matter what the crop, is really all about the soil. Prior to planting in the spring, the soil has to be revitalized through the addition of amendments, to replace the nutrients that were consumed by the plant during its growth and flowering cycles. Soil is not just dirt. Done properly, it becomes a soil food web, where each of the components in the earth makes its contribution to the total mix. Healthy soil contains bacteria, fungi, nematodes, arthropods, amoebas, and paramecium, as well as worms, bugs, and other organisms. Each one lives, eats, dies, and decays in the process, breaking down the essential plant nutrients like nitrogen, phosphorus, and potassium while making them readily available for absorption by the plant.

While the soil is being amended, we wait for the small plants to grow. They are merely in their pubescent days at this point, but in the next couple of weeks they will show their sex and can be transplanted into the large, mound-shaped beds. Soon, checking for the “girls” becomes a daily routine. The chosen girls, the strongest of the strong, will fill the garden and grow up to eight or ten feet high and eight feet in diameter, looking like perfect Christmas trees, each to be harvested starting in mid-September.

By mid-July, though, we remove the boy plants from the garden, before they get too randy around all the pretty girls and open their pollen sacs and let the breezes spread their pollen dust. We want pure sensimillia cannabis flowers, which are more potent than seeded females. A few male plants will be put in a quarantine area and saved for selected breeding when the females are mature.

Once all the girls are transplanted into the beds, a routine settles in involving watering, preparing compost teas every week or so for feeding, checking the girls every morning to look for pests and pathogens, and putting up trellises to hold the branches as they get longer and heavier. The flowering phase doesn’t start until early August, which we will break down in a future edition of our MERRY JANE column. 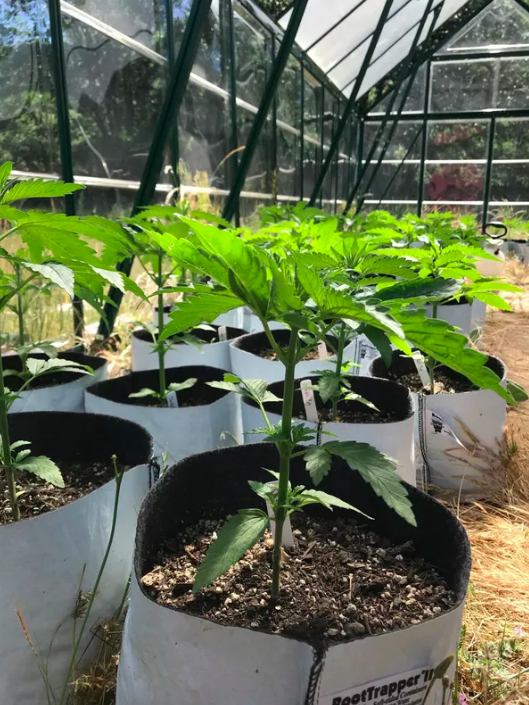 Much has changed since we grew our first plants in Mendocino many years ago. Since our salad days, I have learned so much about cannabis and soil and plant biology, about fertilizers and harvesting and drying and curing. In the old days, dealers would come up to the mountains of the Emerald Triangle with suitcases full of cash. They would smoke one joint and then purchase your whole crop.

Nowadays, we spend hours on branding, marketing, contacting dispensaries, working with distributors, designing logos and labels for jars. We go to Board of Supervisors meetings, attend workshops with government agents and third party consultants. We read all the regulations, laws, and zoning ordinances. We have to fill out forms, give the geographic coordinates of our garden and water source, as well as prepare for inspections from numerous government agencies. In the past, we only had to worry about helicopters flying over and the sheriff or the feds coming in force to bust someone.

For us, the wild outlaw days are over, but the black market carries on for many up here in the mountains, though it’s a greater risk than ever. But we do it for the plant: the labor and risks have always been worth it. The joy we get from growing, sharing, and enjoying the plants — our special girls — remains the ultimate goal. Happy summer grow season, everyone. 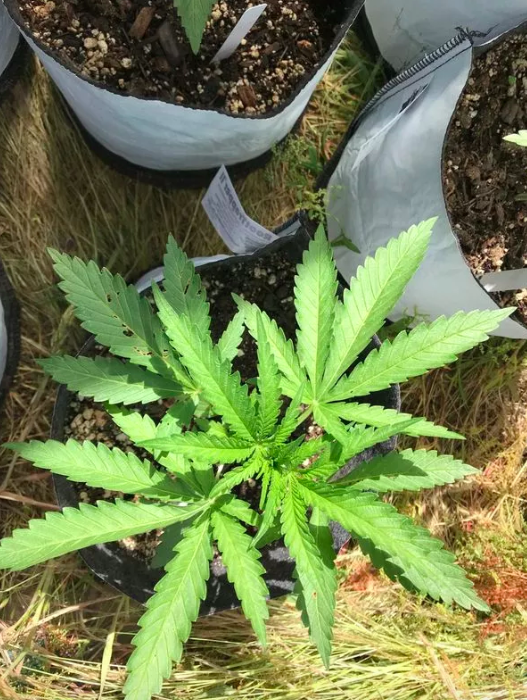