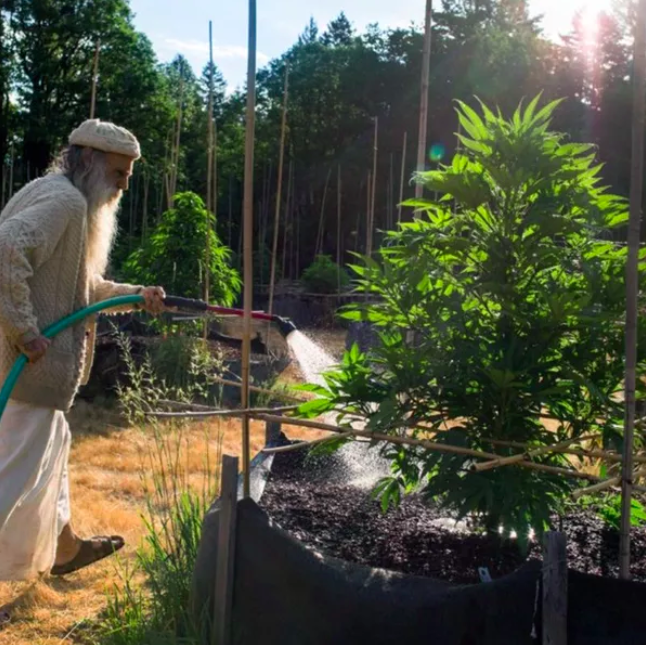 The Hardscrabble Origins of California’s Fabled “Emerald Triangle” (Part One)

How a generation discovered a grower’s paradise in the Northern California wildnerness.

This piece was originally published on MERRY JANE on August 14, 2017.

The hippie revolution in the San Francisco Bay Area was a time of great change. It was the mid-’70’s, and the Haight Ashbury was scuzzy––hard drugs had hit the streets, and even pot sales could be shady. Conspicuous dealers in open-collared shirts with lots of gold, silver, and turquoise jewelry were holding court in every fern bar, and smokers had graduated to the speedy high and yummy chocolate flavor of Thai Sticks, with their little buds wrapped around tiny bamboo sticks. Made you want to visit Thailand.

The horrid war in Vietnam was wrapping up and Southeast Asia had become a popular stop on the hippie trail. Young travelers hit the hills of Thailand to visit opium-producing tribes and sample their wares, then taking the mandatory elephant ride. The area of Laos, Thailand, and Burma became known as The Golden Triangle due to the prolific poppy fields across the region. Along with the opium, tasty Thai sticks were discovered and soon ship loads of finely crafted Thai buds were headed to the Western world.

By the late ‘70s, the Asian connection was breaking down. Too many boats were busted en route to the States, and dealers across the water were going down. The supply train was basically stopped, but stoners still wanted to get high. As they say, “Find a need and fill it.” So green-thumbed hippies began to move north from the Bay Area to the mountains three or four hours away, where they felt hidden enough to grow weed. “Homegrown” they called it and when it began to hit the market people knew right away that this was special, not your average Mexican or Colombian weed that was still available.

It took a certain kind of pioneer spirit to come north to the rough un-populated counties of Mendocino, Humboldt and Trinity, but they proved to have the perfect conditions to become the premier cannabis growing region in California. It took courage and foresight to create farms out of barren hillsides and build a community that hung together, both in and out of the shadows. As the cannabis from this new growing region became more and more popular, a name was given to the area, no doubt stemming from the sister area in Asia. This slice of cannabis heaven became known as “The Emerald Triangle.”

While we may romanticize the pot scene of the ’70s and ’80s, life was not easy. Growers hid out in the mountains, living in tents, eating rice and beans, not unlike those lured to the California hills in the gold rush of 1849. In order not to wear an obvious path to a forest grow site, growers crawled under the manzanita bushes, a bag of soil on their shoulder, then dug a hole to plant in. On the way back out, they would cover their retreating footsteps with brush. Irrigation lines had to be hidden from heat-detecting cameras in overhead planes. The green manzanita leaves offered scant camouflage for the six to eight ounce plants at their base.

Most farmers made their own soil from forest duff, chicken manure, enriching its nitrogen levels with their own urine, which they’d save in gallon-sized apple cider jugs. One could not risk being seen loading up a pick up truck or trailer with bags of soil or fertilizer. The Sheriff or DEA was often on stakeout near local nurseries. Or they could be spotted late at night lurking in the shadows in town near the gas station and the pay phone.

Check out MERRY JANE, and get to know the cannabis movement through their informative, engaging content.