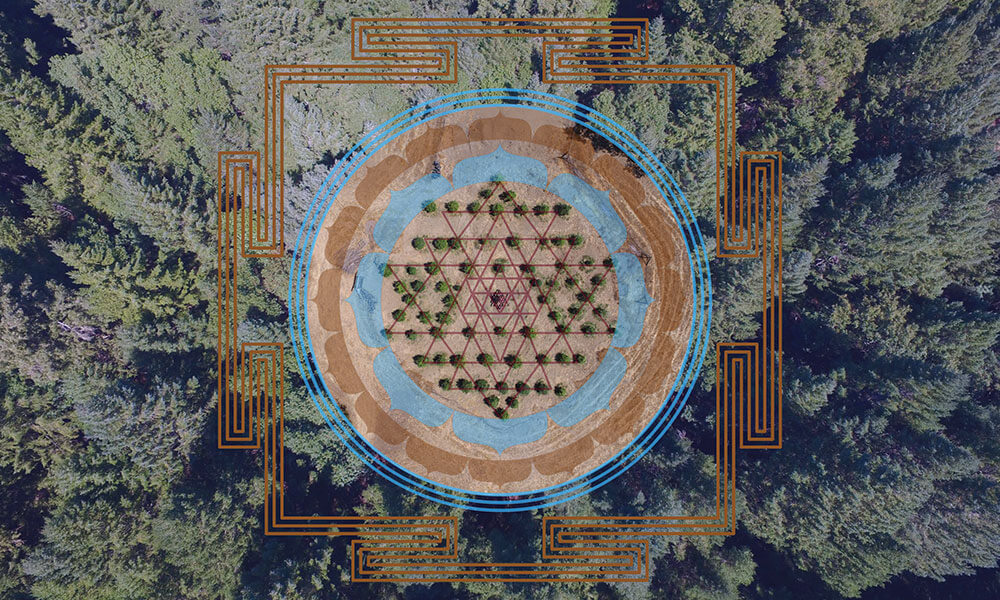 “We are often asked about the story behind the garden design and if it actually makes a difference in the plants grown within its bounds. We think it does — it’s subtle yet sublime.”

This piece was originally published on MERRY JANE on May 24, 2018. All photos courtesy of Swami Select.

Here at Ganja Ma Gardens, the home of Swami Select cultivation, our garden is laid out in the form of sacred geometry. A drone is the best way to see it. We are often asked about the significance of the design and if it actually makes a difference in the cannabis flowers grown within its bounds. We think it does make a difference. It’s subtle yet sublime.

This particular form of sacred geometry is known as the Sri (Shree) Yantra, or the Sri Chakra. It embodies the Divine Mother in Her abstract form. In our case, the garden becomes The Mother.

In ancient Sanskrit, Chakra means wheel and Yantra means tool. Sri is a reverential term meaning sacred. Thus Sri Chakra is a sacred wheel which can be interpreted as a symbolic representation of the spinning energy of the universe. Many people will be familiar with the doctrine of the chakras in the human body from yoga class. 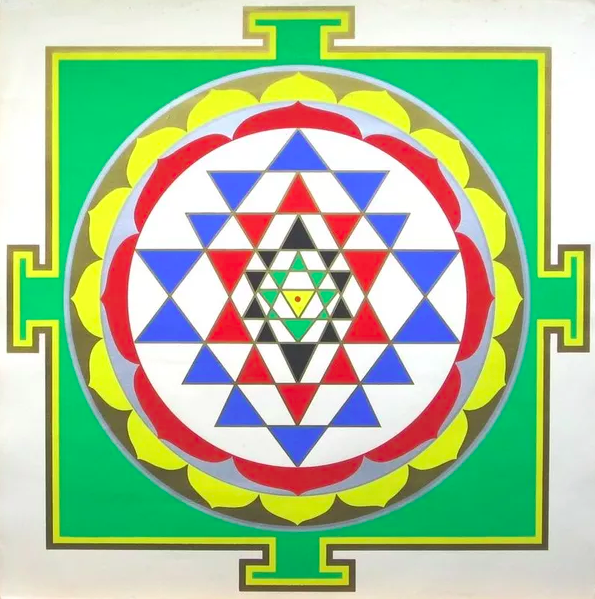 Sri Yantra is a sacred diagram used as a tool or a device to aid in meditation. Most often, the Sri Yantra is a two dimensional graphic that helps practitioners focus on the silent center of the Self. The upward facing triangles represent the male energy while the downward facing ones are the feminine. It is the Yin and the Yang, the Shiva and the Shakti. The Sri Yantra may also enlarge into a three dimensional form, as if you pulled up on the center bindu — the dot in the middle of the intersecting triangles — and it expanded into a stepped pyramid-like shape.

We initially encountered this ancient symbol back in the ’60s when chakras and yoga first entered hippie lore. It was years later, while living in India, when we became intimately connected to it through our family deity, the Goddess Sri Mukambika, as well as the Sri Vidya teachings. Swami would spend hours in meditation, mesmerized while he memorized the image’s intricate pattern of triangles. His carpenter-mind began to see pictures in his Third Eye of precise joinery and how to create a three dimensional Sri Yantra out of wood.

But how does this relate to cannabis, to Ganja Ma Gardens, and to Swami Select? Swami’s meditation visions of the Sri Yantra were so detailed and intense that he began to paint the design over and over again and to make drawings of the joinery in order to build one. The first prototypes were assemblies of just the central interlocking nesting triangles, which he made over 20 years ago when we were living in Goa, India. Years later, here in California, Swami built another prototype of the triangles for a Goa Gil Psy-Trance party in the Sierra Mountains. 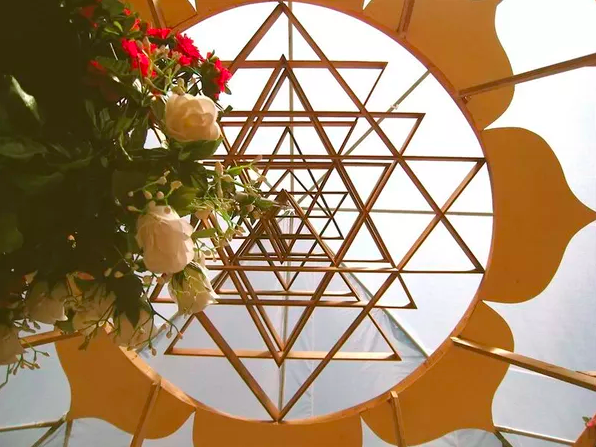 The first full three-dimensional model was built at a friend’s studio in 2003, then taken apart and reassembled at Burning Man that September. The outer square was 24 x 24 feet and it rose about 18-feet-high. Out on the playa at Burning Man, the sunrise-facing East Portal of the Sri Yantra became the DJ booth for a 48-hour trance party, which continued without pause, even when a white-out dust storm hit. After the Burn, the whole sacred sculpture was dragged to a burn pile and incinerated.

The next iteration, with significant engineering improvements, was again 24×24 feet, but this time over 21-feet-high. It was built at our ranch in 2008, and then transported in pieces and sections to the Earthdance Festival at Black Oak Ranch outside of Laytonville. There, it became the center of a ritual circle dance with all the festival goers, led by Suzanne Sterling. Over 5,000 people gyrated around the sacred geometric structure, symbolic of the transformation of abstract energy into physical creation.

After Earthdance, the Sri Yantra was disassembled and reassembled at our farm Ganja Ma Gardens in Mendocino. All of the wood for this version, with the exception of the plywood for the lotus petals, actually came from our ranch. A 1 ½ inch copper pipe axis extended down from the bindu in the center of the top triangle, 21 feet above. A spearhead-shaped crystal sat proudly at the very top, while a pale amethyst-colored crystal lay buried under the bottom end. It became the conduit to the Earth, grounding the whole apparatus and enabling the download of cosmic energy. 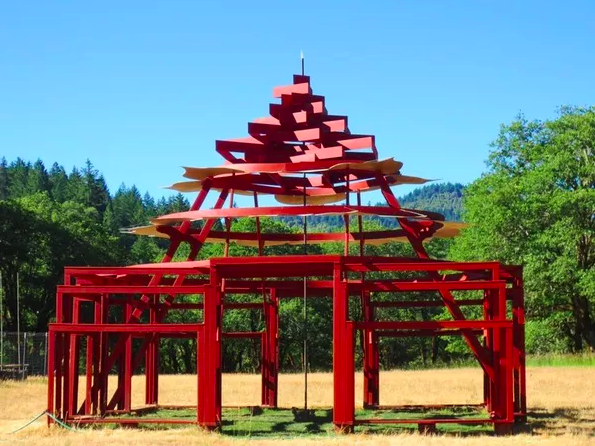 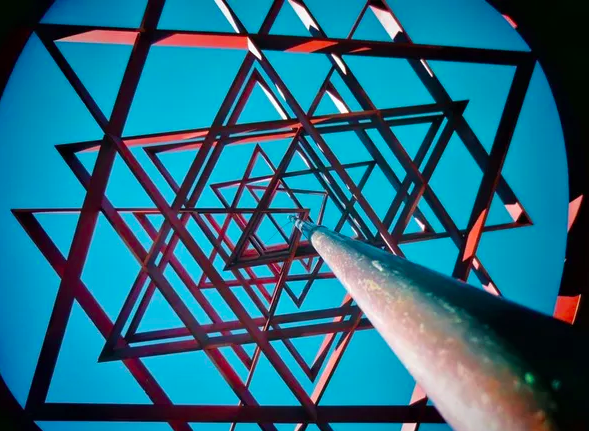 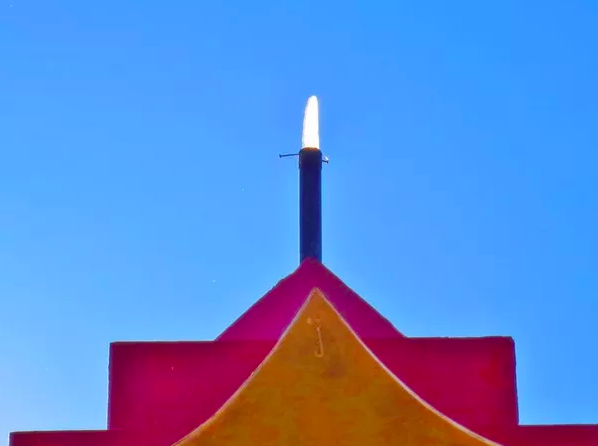 Weddings, meditation sessions, crystal ceremonies, and many healing moments were held inside the revamped Sri Yantra sculpture over seven glorious years. The structure was so charged with sacred energy that to gather 100 friends inside and all chant OM was a transformational experience. Equally, solitary (and silent) meditative moments inside the supercharged energizer were just as affecting.

In 2014, a freak wind storm, with gusts over 100 mph, blew over the entire structure, shattering many pieces. Apparently the ground squirrels had undermined many of the round logs used as support — and the wind did the rest. I was able to salvage and repair most of the top levels of interlocking triangles and re-assemble them into the array that’s now situated in the garden. 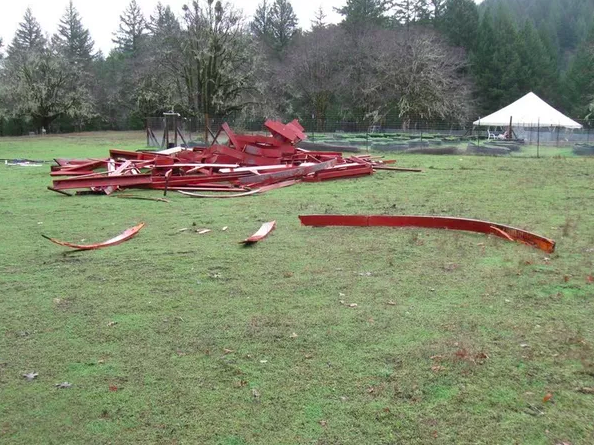 The downfall of the Sri Yantra sculpture coincided with our decision to redo the garden and begin to grow cannabis in the ground. After we had emptied out the smart pots we had been using, we discussed the layout of the new garden and decided to arrange the holes for each plant in the triangle design of the Sri Yantra. The garden was moved a bit so that the site of the vanished wooden Sri Yantra was within the new layout, incorporating the energy previously generated there into the garden.

The triangles are within a circle that’s 108 feet in diameter, and they are oriented to the compass points, which aims to connect the garden to the Earth’s rotation. By arranging the plants in this way, we are maximizing the transference of cosmic energy into the ground and thus into the flowers growing from that soil.

Before sprouting the seeds, we lay them at the feet of Ganja Ma, where they absorb the blessing of the Goddess of Cannabis. As the sprouted seeds are placed in soil, we chant a mantra in blessing and they are each given a drop of water from the Sacred Ganges River — Ganga Jhal, as it is called, or Amrit, or the Elixir of Immortality. But that is a whole other story. 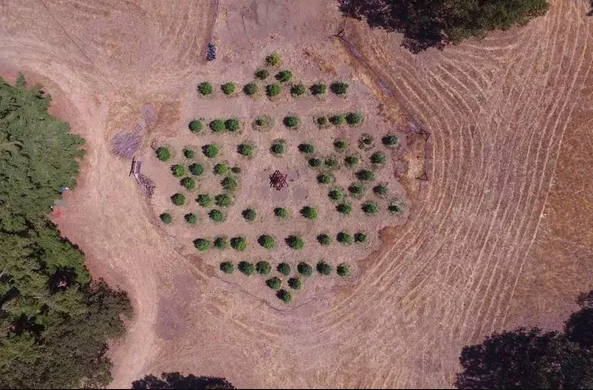 Once the seeds have sprouted in the hoop-house, we perform a puja to install a statue, a Murti, of the Goddess Ganja Ma in the garden, on top of the truncated Sri Yantra, where She can watch over the plants. At Swami Select, we grow many flower strains with varied and specific ratios of THC to CBD combined with various terpenes. It seems that with the guidance of Ganja Ma, each plant presents a unique ensemble of compounds destined for the person who most needs that particular phenotype.

The combination of all of these elements inoculates the cannabis with sacred intention for healing and inspiration. Ingesting cannabis that was grown in a sacred diagram (and incorporated into the soil) connects the consumers with cosmic energy while at the same time grounding them. The design embodies the Divine Mother in the Earth, transferring Her power into the plants whose flowers become a sacred offering and a vehicle for higher consciousness. 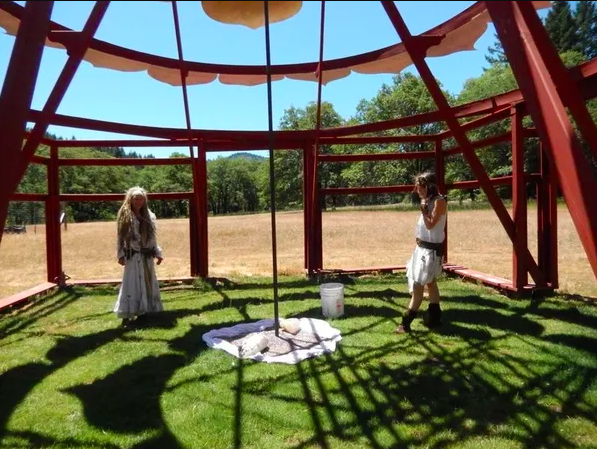 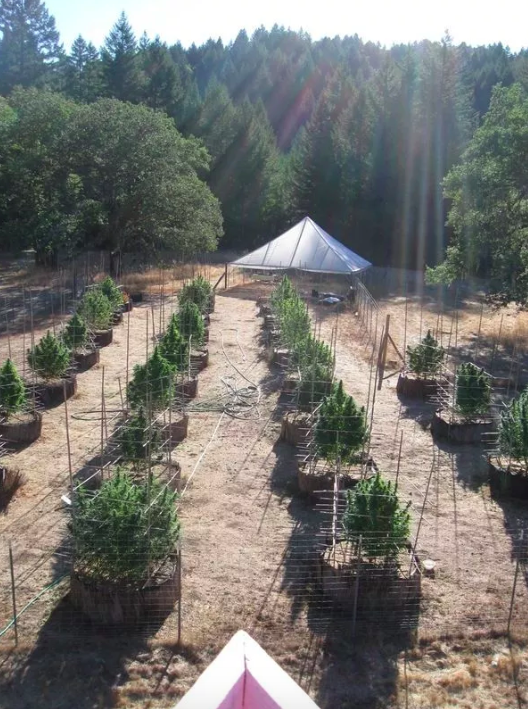 Cultivating our crops this way is a core part of Swami Select’s mission. We honor the consciousness of the plant and its direct link with our body’s own endocannabinoid system. It’s not just sun-grown, organic cannabis — it’s cannabis that’s been propagated, nurtured, and harvested using spiritual practices connected to ancient tradition. Revering the herb as a Divine Gift and Manifestation enables one to listen with one’s inner ear to Her subtle voice as She directs us how to care for Her.

Swami and I have been ingesting and celebrating cannabis for over five decades now, and Swami grew his first plants four decades ago. How many decades yet to come? Only the Goddess knows for sure. Regardless, we are blessed to be able to grow and share this noble, sacred flower and live at Ganja Ma Gardens with Mother Nature. One day soon, Swami plans to rebuild a new Sri Yantra out of wood here at the ranch.