Skip to content
By Swami ChaitanyaNotes from Nikki, Swami SaysJuly 26, 2018

As an old hippie friend of ours used to always say, “I wouldn’t trust anyone who wasn’t a scammer.”

This piece was originally published on MERRY JANE on July 26, 2018.

In the good old days of prohibition — well before there was GPS, or police equipped with military-grade gear — there were a million tricks to the smuggling trade. Back before there was any domestic weed on the scene, cannabis found its way across borders and into the USA from ports around the globe: Thailand, Morocco, Nepal, India, and of course Mexico, Colombia, Panama, and other countries in Central and South America. What we ended up smoking was poorly-cured product that was more brown than green, usually broken off of a compressed kilo block, and full of stems and seeds. But it must have gotten us high, because we kept smoking it…

Thousands of people risked their lives to get marijuana to the masses. Whether a simple hippie backpack traveler on the road determined to send back that last bit of hashish from Afghanistan, or a mega smuggler in Australia determined to bring home that full shipload of Thai Sticks, the risks were great. I know from personal experience: In 1977, I got busted in Kabul for a tiny bit of hash, and was lucky to spend only one night in prison… but that’s a long story for another time. The friend of a friend who got busted arriving back in Sydney from Bangkok wasn’t so lucky when their deluxe ocean-going sailboat was inspected too closely; the whole crew spent years in an Australian prison.

Any well-seasoned stoner or OG cannabis activist probably has either their own story about committing illicit acts for the love of nug, or likely knows someone who did get “popped” by the police and did time. Unless they didn’t, meaning they changed their identities and headed to distant lands to assume new lives. “Hippie Raj” colonies sprung up across the globe during the ’70s — exotic sounding locations, like Kathmandu, Varanasi, Chiang Mai, Marrakech, and Cuzco — which offered refuge to both smugglers and reclusive rebels with names like Acid Eric, Mushroom Jack, Amsterdam Dave, and Johnny Cairo. Really, those were the actual nicknames of people we once knew.

Along the way, these adventurers discovered unusual places and the equally-unique psychotropic substances that grew there. In Himalayan villages, ganja plants grew 14-feet-high in every garden and compost heap. They were used for the protein in their seeds, as well as the charas hand-rubbed from the flowers to produce their style of hashish. Locals everywhere — from the mayor to the school superintendent to the rickshaw driver — were honored to share a smoke of hashish and a cup of tea. Holy men and shamans imbibed to heal and teach. It was refreshing to live briefly in various cultures where cannabis has been a part of daily life and a dependable herbal medicine for thousands of years. There was no stigma. There are still some places in India where one can buy charas or a gholi (a small edible ball of cannabis medicine) at government stores. 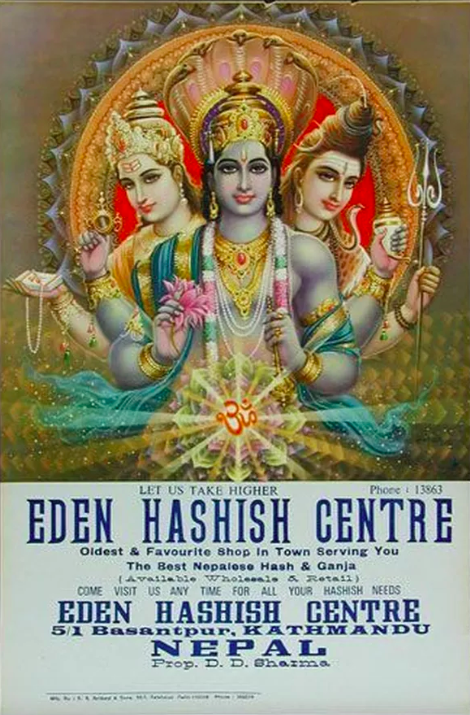 The nomadic youth of the time were naturally anxious to share this lifestyle and the mind-altering substances with their friends back home. This is how everything from magic mushrooms to opium to cannabis made their way into the hippie subculture swelling in the United States and beyond. It was not unlike the bygone days of the Spice Routes, when hashish would have been smuggled right along with the cinnamon, nutmeg, cardamom, and cashews. But in the new age of “civilized” people, these cannabis-derived substances were considered illegal.

Hence, the introduction of the ancient profession of smuggling to the new young rebels of the world. Teaming up with locals in such places as Afghanistan, Goa, Lima, Cartagena, Kathmandu, and Thailand, alliances were formed and arrangements were made, which enabled marijuana shipments to leave their home ports and arrive at their distant destinations with no problem. The techniques of the ’60s and ’70s were varied: false bottom suitcases, carved-out copies of the Bhagavad Gita, hollow legs in furniture and rolled into countless carpets. Surf boards and scuba tanks, Hare Krishna incense, and llama blankets. Even the baby’s dirty diapers were employed.

Then there were, and no doubt still are, the “mules.” I always had both wonderment and admiration for these human couriers who were primarily women. I was in awe of their courage to keep a straight face going through customs, and baffled by why they would do it for such relatively low pay. We know women of all ages who have risked years in prison, or worse, for just a few thousand dollars. Most of them made it, some of them didn’t. In either case, just doing it gains entrée into the smuggler society. It takes a lot of starch in the the spine to live such a life, as well as a willingness to run and leave the past behind.

Of course, most of the young folks on the “Hippie Trail” back in the day sampled local plants and intoxicating concoctions along the way. Ask anyone who was in Afghanistan in the ’60s and ’70s about their first opportunity to smoke some of the famous hashish there — pretty much available on every street corner — and very likely they will say something about a “two toke blackout.” If only we had some of that pure black Afghani hashish from the ’70s now — not only to smoke again, but to test against a powerful dab or extract from today’s legal market. I’d still place my bet on the Afghani. One hit of that and you were propelled back in time to the Arabian Nights.

Travelers on the trail, founders of the global tribe of tokers from almost 50 years ago, shared a spirit of wanderlust and a love of consciousness expansion. Yet not unlike the War on Drugs we have faced here in the hills of the Emerald Triangle for so many decades, these reefer revolutionaries must have always had their third eyes wide-open and been discerning. Sometimes we’d take a risk and follow some anonymous and slightly sleazy guy down a labyrinth of back alleys to a skanky corner where he’d literally stick his hand into a pile of stinky garbage and pull out a funky bag of hash. Other times, we knew when to pass, potentially saving ourselves from a trip to the slammer. Still, there’d be instances when the connect would take our money, disappear into a building, and we’d never see him again. We took so many chances on so many levels to score, we’re lucky we’re still around. Cannabis produces such a positive mood that the average smoker doesn’t always consider the possible evil lurking around the corner. So whenever it does happen, it is always shocking. A dose of (legitimate) paranoia now and then was the cost of our insurance in the old days. It was a way of life, one that we actively sought out.

And this underground ethos, shared among many in this particular era of prohibition, came to define a facet of cannabis culture. Eons before legalization was even a remote possibility on the hazy horizon, you could use your sixth sense to recognize your peers, your community, your fellow “freaks.” Mega-dollar deals that circled the globe were sealed with just a handshake and a nod of the head, ultimately bringing cannabis and so much more to the masses.

As an old hippie friend of ours used to always say, “I wouldn’t trust anyone who wasn’t a scammer.”