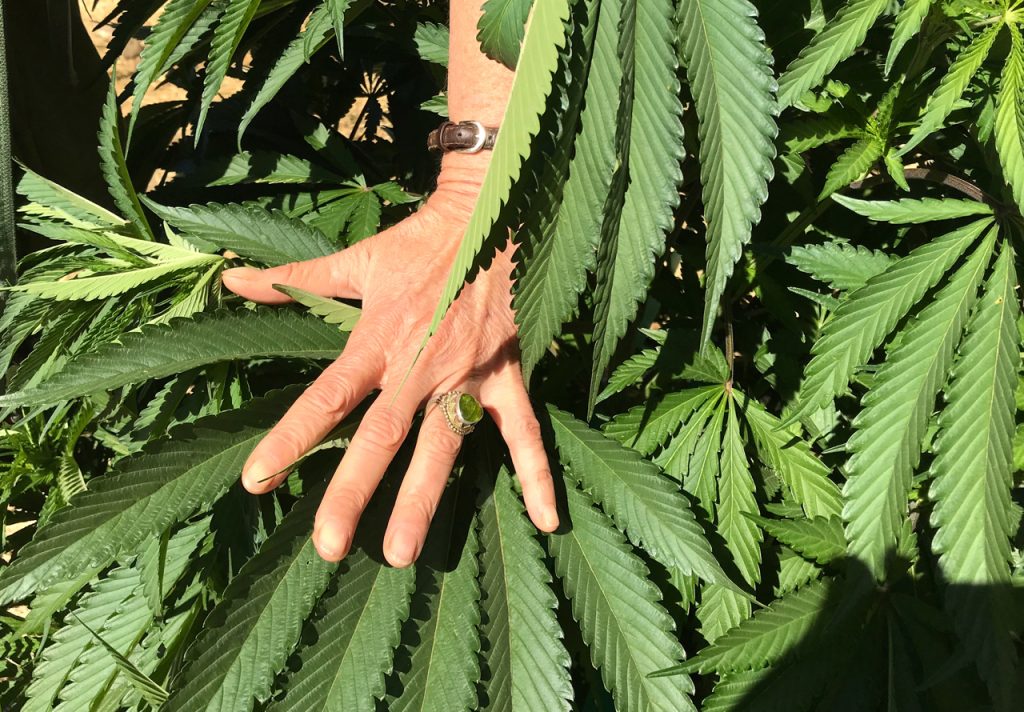 “It’s August in The Emerald Triangle. The weeks of hard work spent germinating, transplanting, preparing the garden soil, and getting the plants in the ground are over. It’s a mellow time on the farm, relatively speaking.”

This piece was originally published on MERRY JANE on August 15, 2018.

A soft breeze, a warm sun… the ravens cawing and the squirrels chirping in the tall trees. The angle of the sun has changed, the nights are cooler, and there is a scent of dryness and earth. As one walks closer to the garden, tantalizing wafts of happy cannabis plants float across the meadow to greet you. The girls behind the gate are stretching their brilliant green arms towards the sky, shimmering in the gentle wind. There is a mood of expectation with the promise of the ripening crops.

It’s August in the Emerald Triangle. The weeks of hard work of germinating, transplanting, preparing the garden soil, and getting the girls in the ground are over.  They have grown so much that already some tips are starting to bunch up and show pale yellow hairs, meaning flowering has begun.

Now is the season for vigilance, always keeping an eye open for pests and pathogens and the occasional broken branch needing to be tied up. The water tanks need to be checked regularly to see if they are full, and if not the water lines have to be walked from pond to tank. Wild critters like raccoons, coyote, or brown bear like to bite into the poly pipe and punch a hole to get a drink or take a shower. The girls are watered every other day and compost teas are brewed every ten days to unlock the nutrients in the soil. As part of our Integrated Pest Management Plan, we have hung little paper sachets containing beneficial predator insects in each plant. 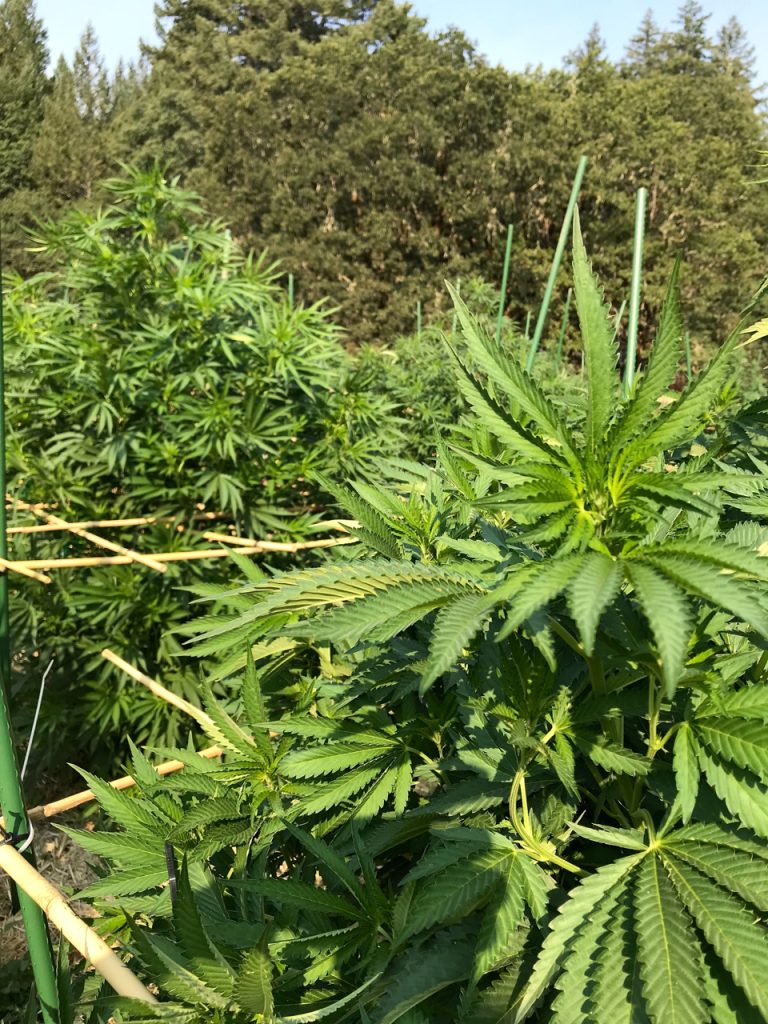 By now, the first round of trellising is done; the second tier will be added during the next weeks as the plants shoot up over eight feet. Each farmer seems to have his or her unique way of trellising the plants to protect them from broken branches as they grow heavy — some people use the metal “T” post and nylon netting technique, some use circle columns of deer fence or rebar wire; we use interlaced bamboo poles.

At this point in the cultivation cycle, it’s especially important to look out for plants or even branches which have changed their sex. Believe it or not, some very convincing females have turned male after being planted in their permanent mounds in the garden. They must be pulled and removed. Every year we find that a few of the plants which have been quarantined far away in the “Boys Quarters” — to keep their potent pollen away from the girls — have at some point turned female. Segregation of the sexes is necessary or the boys will pollinate the entire crop just by blowing in the wind, and then it’s time to say sayonara sensemilla! Cannabis with seeds is unsellable as high grade bud, and the whole crop would have to be used for manufactured products, at a much lower price.

It must be something about the primal urge to preserve the species that if there is only one sex in a garden area then one or two plants will change sex, seemingly overnight, to be able to propagate. In some cases, only one branch will suddenly show male or even just one or two scattered male flowers will appear. People sometimes call these hermaphrodites, and these little male flowers will impregnate female flowers in their immediate neighborhood. That’s why an occasional random seed will be found in your eighth of premium flower. 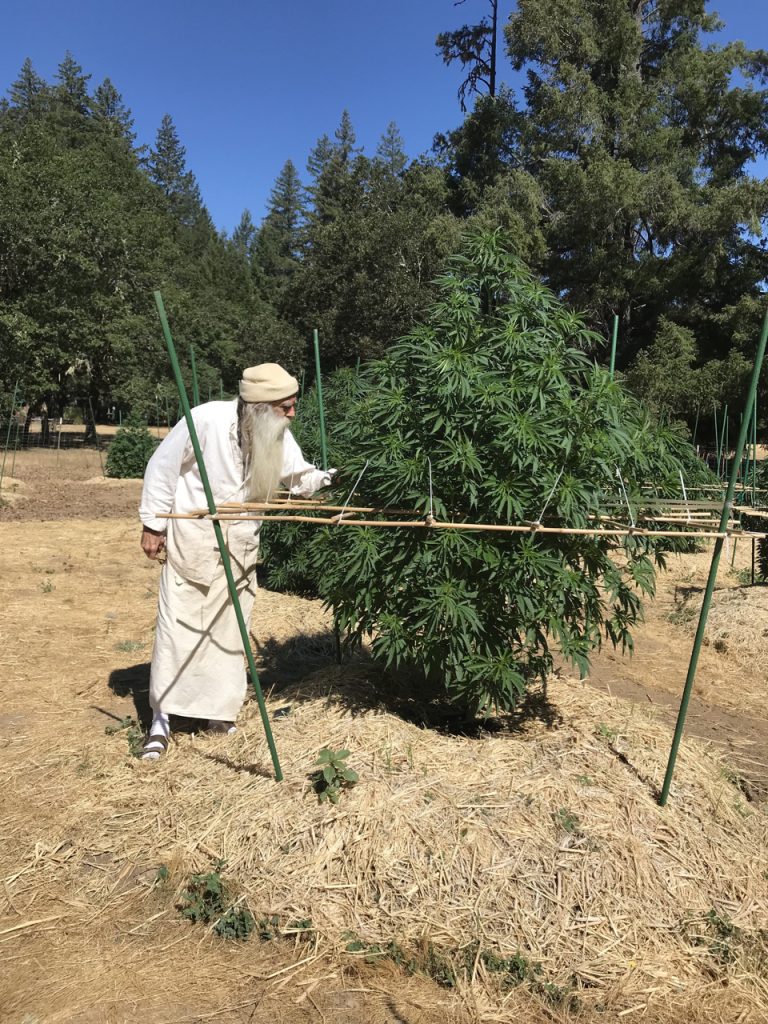 The biggest threat this year has been the gophers, who tunnel into the little mounds and chew up the roots. While walking through the garden chanting mantras, I’ll suddenly notice a plant seriously drooping, one that seemed to be perfectly healthy yesterday. Checking closely under the plant in the “bowl” in the top of the little bed, there will be a gopher hole leading right to the juicy tap root.  Since our ranch was originally named Gopher Flat, this is not surprising. It has been so very hot and dry that the animals are desperate for water. We put out solar beepers, which are supposed to drive away the thirsty critters, but they don’t seem to work. Fortunately, our two cats Zuli and Frisco have been catching a few lately.

This is also the time to start harvesting the male pollen we want to breed with certain female cultivars. The pollen sacs are bursting with golden green powder falling out of them. It is perceived as both divinely potent and dangerously prone to spreading everywhere, potentially fertilizing all the females. Harvesting pollen and impregnating later on is done with extreme care, with clean hands and a change of clothes required afterward.

The time has also come to prepare the drying area for harvest. This involves emptying out the barn and spraying the entire interior with a OMRI approved chlorine dioxide disinfectant to combat mold and mildew. This year’s crop should be larger than last, so we have to expand our drying area. We are working on a system of pulleys hauling up 5’ x 8’ heavy wire “hog panels” made out of five inch squares held horizontally with the long branches hung off the squares. 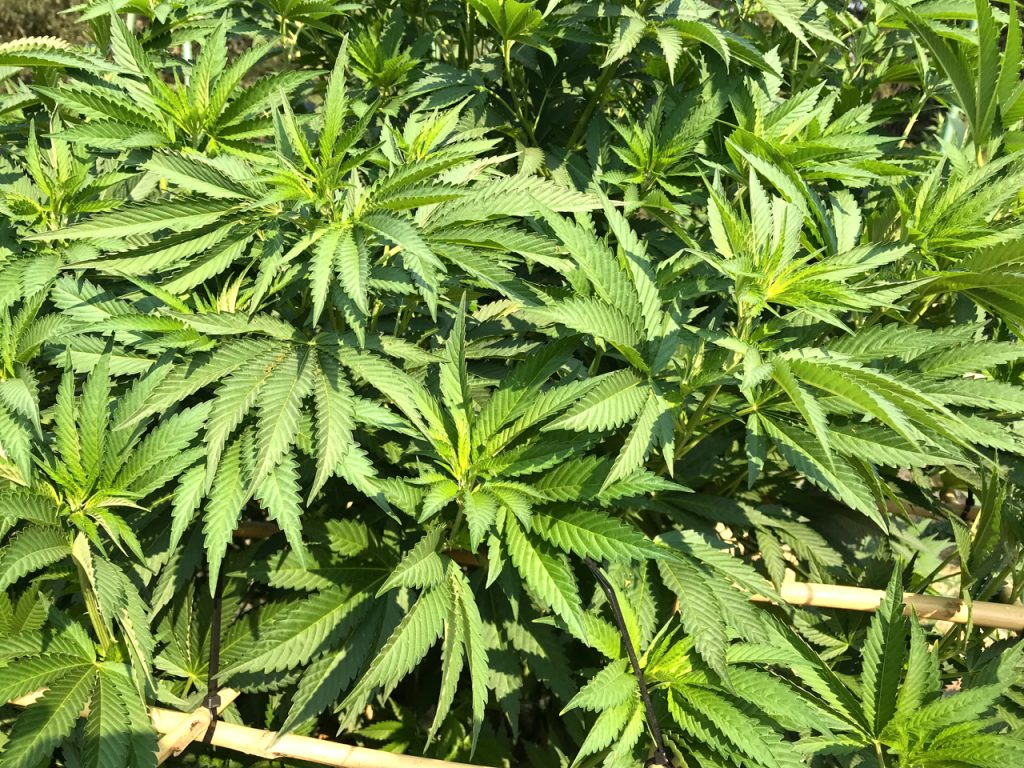 Besides preparing for state and county inspectors, who could come visit our gardens any day, we have lots of farm chores which never cease. There’s a power shed for the solar power inverter to be finished before the rain comes in late September, as well as a containment area for the gasoline and diesel fuel cans. But all in all, it is a mellow time of year — relatively speaking. Watering the garden every other day is the primary activity, as we do it all by hand. This also gives us a chance to check in with each girl in the garden individually.

At this time of year, the power of the elementals of nature is so prominent. The Earth is fecund, Water is precious, Fire is immanent, and Air is blowing hot, often with a hint of smoke. Over the years, climate change has truly escalated, as drought years occur more frequently. Combined with many more growers in the hills, water is getting increasingly scarce. Naturally, this raises fire concerns, so there is an element of extra awareness that’s always present in the summertime. 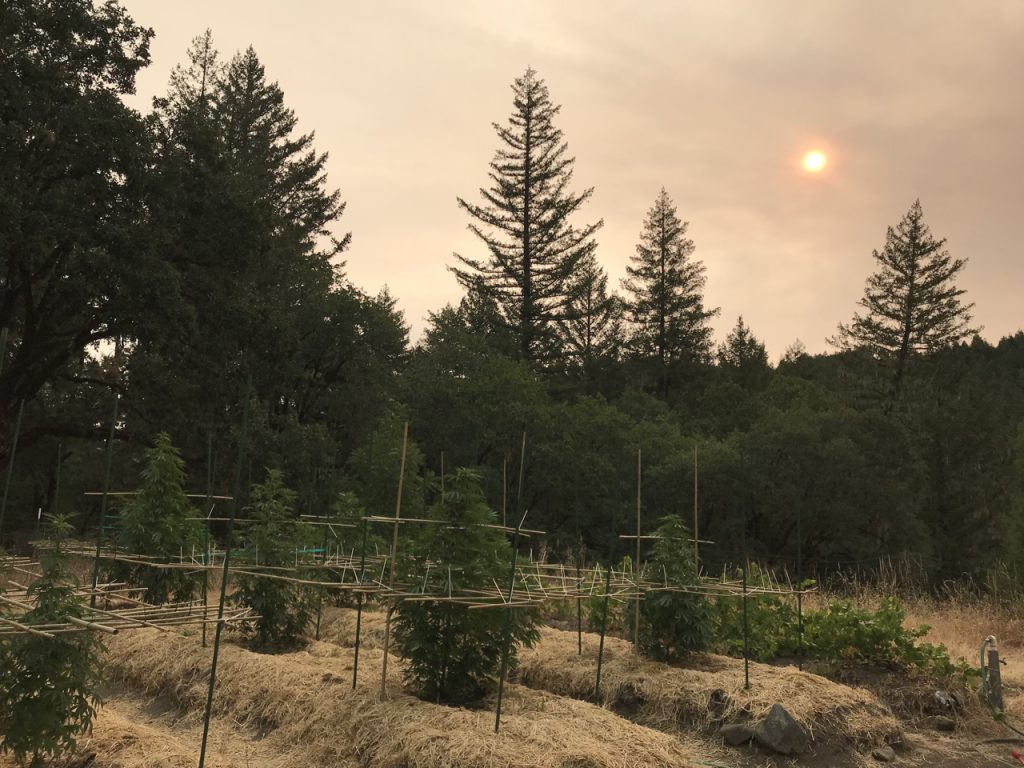 But whatever the toils, trials, and tribulations, the main feeling that hovers over the whole ranch at this spectacular time of year is the vibrant green vitality glowing in the cannabis garden in the distance, across the meadow and beyond the oak trees. Walking among the sacred herbs as they reach proudly upward is to be nourished and uplifted through sight and smell and to sense the glory of joyous plant growth. The plant transforms herself, and then she transforms us all. It’s an honor to be a part of the process.