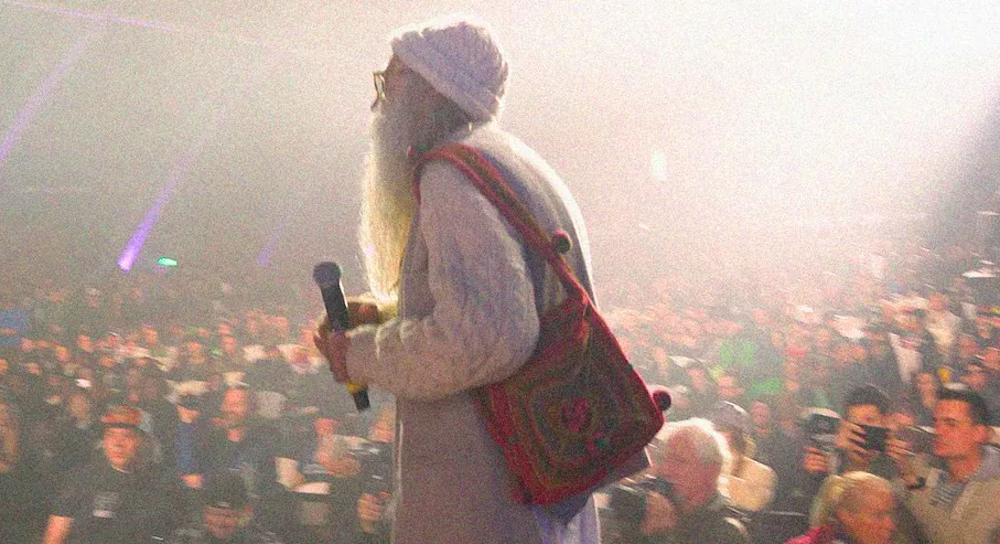 “Our veteran cultivator columnists detail the 15th edition of the “Oscars of Weed,” where they served as Top Flower Judges, hung out with Willie Nelson, and smoked the best cannabis in the U.S.”

This piece was originally published on MERRY JANE on December 20, 2018.

Cannabis really knows how to throw a party. She knows that a trippy environment with tasty food, friendly faces, and plenty of lighters is intrinsic to a successful gathering. If Cannabis were always the hostess, the world would be a more peaceful place. Last weekend, well over 20,000 attendees of the annual Emerald Cup at the Sonoma County Fairgrounds were treated to such a glimpse of the sublime, with our favorite plant working her wonders to bring joy, inspiration, and a damn good time to everyone who was present at the 15th edition of the festival.

The best news we have to report from the event is simply that legalization has not killed the spirit of the cannabis community. While the standards and amenities at The Cup keep improving each year — from plastic snap-lock flooring over countless acres of muddy ground, to six-figure product displays, which included consumption lounges inside elaborate structures —  the variety of the vendor booths and the people who patronize them continue to reflect the wide range of fans this plant attracts. Cannabis is truly one of the few things that two-thirds of all Americans can agree on liking.

What began as a one-night intimate harvest festival for farmers, dealers and a few old-time activists in a small town in the heart of The Emerald Triangle, has ballooned into the largest competition of sun grown organic cannabis flowers and products in the world.  At first, it was only about flower judging, with approximately 30 entries from nearby growers and maybe seven judges. Back then, about 300 friends and family would show up and party until late at Area 101, where the Cup was originally held.

As observers of the cannabis revolution over the past ten years, we have watched as cannabis conferences, workshops, summits and conventions have sprung up all across the world. Nowadays, one could attend a cannabis event somewhere on the planet just about every week. We can’t help but notice the change in the people going to these events, as investors and ancillary businesses (manufacturers of machinery, professionals such as lawyers, insurance agents, compliance officers, and so much more) have jumped into the middle of the cannabis scene. Most of them are in the “do not touch the plant group,” and are new to the industry, hoping to use their skills or mechanical/technical products to break into the market and make a quick profit.

We have been to any number of New West Summits, States of Cannabis, CCIA, NCIA, and MJBizCon-type conferences, and the thing is you can never really smoke and get high with the other conventioneers. You have to sneak out into the alley or parking lot, or crowd around the hotel side entrance — keeping a 20-foot distance, of course. At MJBizCon in Las Vegas, we almost got thrown out of one smoking lounge, and later were rousted away from the hotel’s exterior smoking area. We have considered getting a T-shirt designed that says:  “I went to a Cannabis Convention and I couldn’t get high!”

The Emerald Cup, however, is the convention where people come to get high inside the event, and where you can actually sample the organic cannabis wares that are for sale or for sharing. Everything is grown and created by California’s traditional, clandestine (and magical) cannabis pioneers, as well as their successors. It is where you can actually meet the growers and product makers, the hands-on people.

When it began in 2003, there were no sales booths; everyone just shared their best flower. Of course, there were any number of backroom deals that went down, too, though. The first official vendor set up in the gravel area just outside the door to Area 101, and he sold marijuana memorabilia like old apothecary jars with “Cannabis Sativa” on the label. Then some glass blowers began to sell pipes; others sold or gave away cookies, salves, and ointments.

At some point after five or six years, a concentrates competition was added, which at first took place during the event. There’d be a bunch of people sitting around a table under a tent smoking bubble hash entries. Then, dispensary owners and seed sellers came on the scene, and it became a little more formal. But, at heart, it was always about the “touch the plant” people, about the cultivators and the flower, which are both the source of everything. The Cup eventually evolved to include the concentrates, edibles, ointments, and the people who create those, as well.

This year, the emphasis was still on plant wisdom and knowledge, honoring the master growers and product creators. As such, there were still countless Cup-goers with grey hair, dreadlocks, and shaggy beards. But there was also over 100 speakers, panels, and workshops spread over Saturday and Sunday. Subjects ranged from How Plants Eat More with plantmaster Jeff Lowenfels, to Micro-Dosing: From Cannabis to Psychedelics. There was even a panel with the three main state government regulators: Richard Parrott from the California Department of Food and Agriculture, Lori Ajax from the Bureau of Cannabis Control, and Lisa Sherrod from the California Department of Tax and Fee Administration. This was a radical change from the semi-underground roots of the Cup. 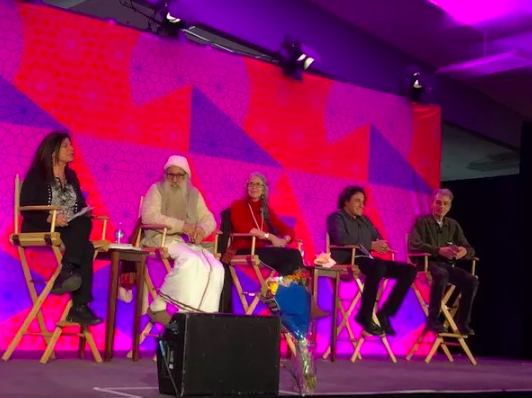 We were joined on a panel called Cannabis Spirituality: Practices, Beliefs, and Laws by longtime activists Mikki Norris and Chris Conrad, who acted as moderators, as well as by the brilliant cannabis attorney, Omar Figueroa. This is what makes The Emerald Cup so special: certainly this kind of panel would not be found at MJBizCon in Vegas. To top it off, following the hour-long panel in a mid-size auditorium, about 100 people walked with us to a large, open-sided area where we gathered in a circle. An altar to Ganja Ma, the Goddess of Cannabis, was placed in the center. Shepherded by Chris Conrad — the father of Cannamaste — a brief ceremony was held, naturally including the sharing of several very large joints crafted with cannabis donated by the Cup participants. The ritual was closed with three long chanted “Oms…” which resonated throughout the entire fairgrounds.

Meanwhile, in the many gigantic smoking areas, guests inched their way down crowded aisles between incredibly elaborate booths featuring cannabis for sale in just about every configuration. Flower, oils, tinctures, topicals, edibles, and everything else you could imagine. Dabbing bars offered hits for a dollar a pop, and people were so high that the whole place felt like it was elevated. The giant tents got so full of cannabis smoke that they essentially became hot boxes, just like the old days at Area 101. The smoke was so thick, the security guards had big smiles on their faces — they were clearly loving it. How often can a security guard get high at work and it’s considered par for the course?

This is not to say business didn’t happen at the Cup. To us, it looked like every booth was making non-stop sales. Though it sounded confusing initially, the festival’s new regulations stipulating that people could only make purchases from a distributor at a both adjacent to any farm’s actually seemed to work out. And even though customers still had to pay the high taxes on top of regular store prices, the selection was excellent and they got to meet the cultivator/manufacturer. That’s worth a ton, and the long lines all day attested to it. 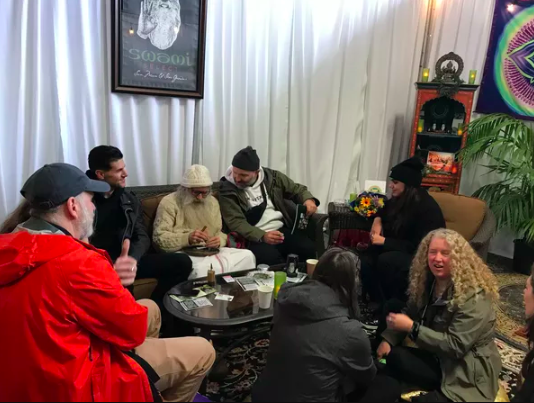 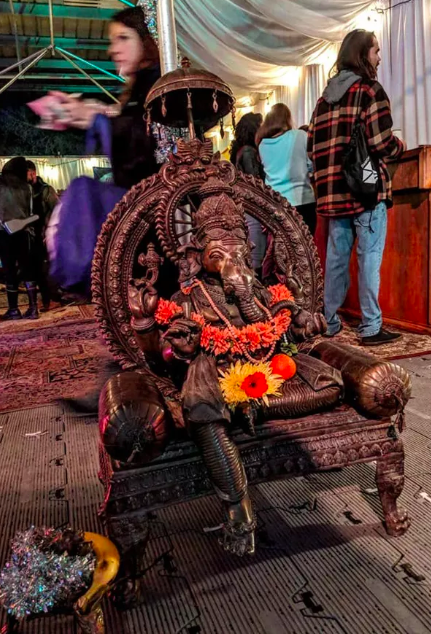 As the head flower judges at The Emerald Cup, we decided to host a lounge for people to come and hang, talk with other judges, and share some of the best cannabis in the world. The large 20’ x 40’ white tent, draped in soft fabrics, was at the back of the largest consumption and sales area. A giant statue of dancing Shiva Nataraj, all lit up in red lights, guided people there. It felt like entering the heart of the temple. We brought couches and carpets and altars and lots of cannabis from our personal garden, so that we could liberally and legally share it with our guests. What a delight that will always be! Many others came and shared their product, as well.

A highlight was when master hashishin Frenchy Cannoli showed up with his amazing hookah with the eight pipes snaking off of it. As Frenchy would say, it was “ouh là là.” For several hours each afternoon, layers of people huddled around the hookah, passing the pipe. Luckily, there were several couches to catch them as they’d begin enjoying the positive effects of Frenchy Cannoli’s supreme hashish. Gifting and sharing is how it all began, and some of us originals will never change our ways. Giving is never a burden when the immediate joy is so apparent! 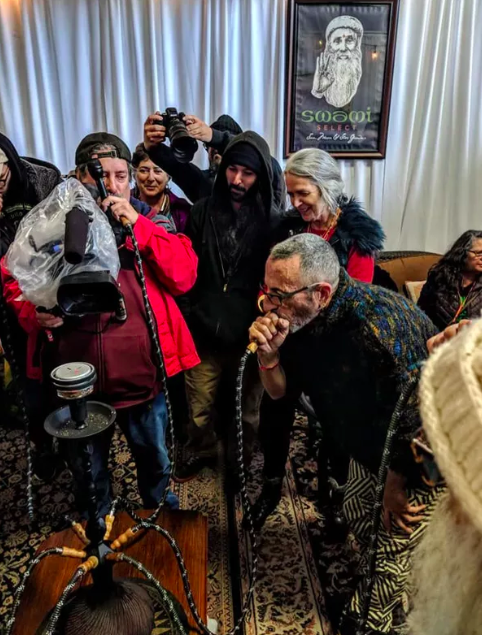 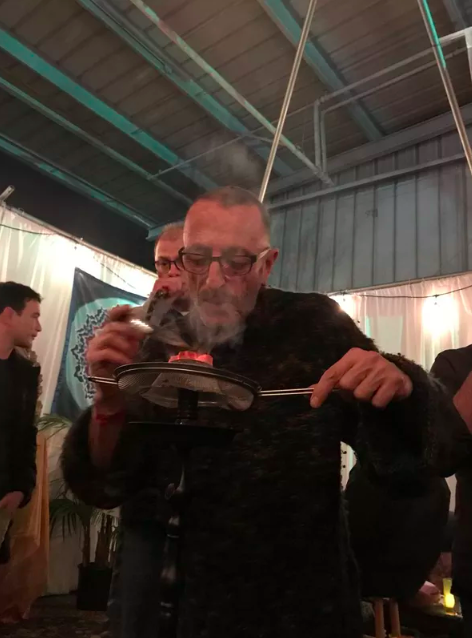 The Awards ceremony on Sunday afternoon is always the highlight of the event, as eager farmers and manufacturers await the news of who’ll take the top prizes. There were 27 categories to award this year, and many awards now come in two categories: 1. Permitted, Compliant, Legal… and 2. Personal, Non-Commercial. Once again, we were honored to announce the winners of the four flower divisions — Sungrown and Mixed Light, both permitted and personal.

We were almost through the list, and only had the top three sungrown flower winners to announce, when Willie Nelson arrived to receive an Emerald Cup Lifetime Achievement Award, which henceforth will be named after him! So we scooted off stage to let him receive his award, which was crafted in glass in the shape of his old guitar Trigger (a nice touch indeed!). Willie didn’t stay long on stage, but his presence was a crowning moment at The Emerald Cup. Swami and Willie shared a hug as they passed, and then we were back on stage again. First Prize in Permitted Sungrown went to Ridgeline Farm in Humboldt County for their “Green Lantern.” First Prize in Permitted Mixed Light was awarded to Mendocino County’s Tar Hill for their delicious Pink Lemonade.

Following the awards, there was more music on the main stages and more smoking in the tents, as the rain pounded outside. As smiling guests drifted away later that evening, the general feeling was of a job very well done. We had preserved the essence of it all; the Emerald Triangle spirit carried through. In true form, the after party went until 5 in the morning, proving (once again) that farmers are a hearty lot with a lot of heart. It was a memorable Cup without a doubt, which offered great hope for a positive future in the cannabis community.