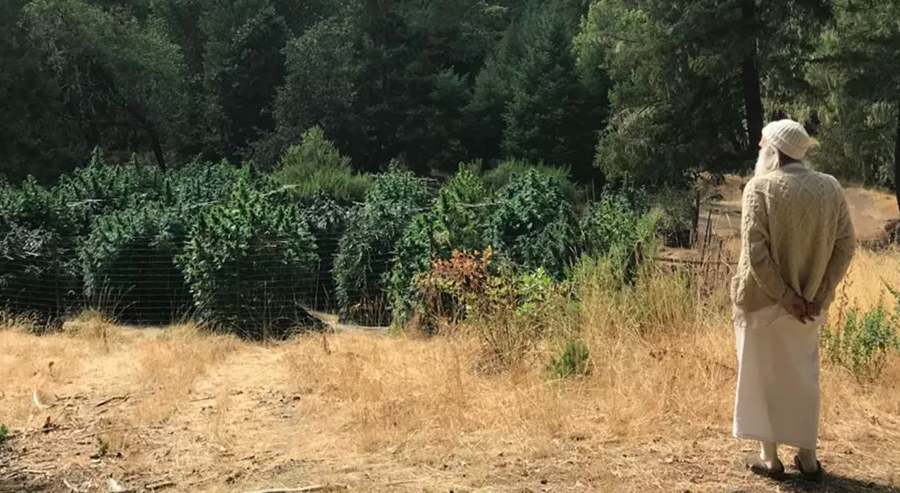 “Beautiful fall days signals harvest is near. The plants have reached their maximum size. Swami is dwarfed by some of their soaring heights and crowded by their breadth as he glides through the garden at midnight.”

This piece was originally published on MERRY JANE on October 4, 2018.

Beautiful fall days. The forests surrounding our farm are turning myriad shades of yellow, brown, and red. Clear blue, smokeless skies radiate overhead. Evenings are cool and crisp. A near-frost in the early morning turns some leaves purple on our girls in the garden. A golden sunset projects a rainbow lotus over misty mountain ridges, tumbling to the Pacific.

The plants have reached their maximum size. Swami is dwarfed by some of their soaring heights and crowded by their breadth (now 6-8 feet in diameter) as he glides through the garden at midnight, chanting the ganja mantra in the moonlight. “Om Aim Hreem Kleem Shreem Ganajamayai Nama” — or, “Honor to the Great Goddess of Ganja Ma.” On the hot and sunny days, we sniff the air eagerly as the buds fill in and their fragrances waft and mingle. Visiting friends report that as soon as you cross the Mendocino county line, it smells like cannabis everywhere. 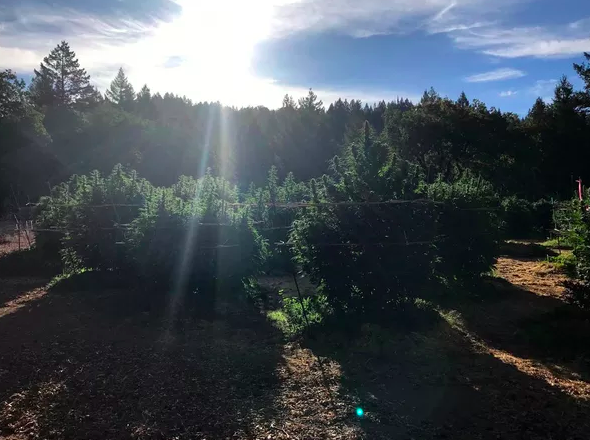 The first showers of the season started late on a Saturday morning, pretty much right on schedule. There hadn’t been a drop of rain since late May, but Mother Nature always releases her tears again around the full moon that follows the autumnal equinox of September 22. The rain doesn’t do much beyond settle the dust on the roads, but the plants love it. Every leaf on every plant begins tingling with the joyful elixir of water. Every tree, every weed, every flower, every pine needle, every bit of moss, lichen, or mistletoe clinging to the trees starts vibrating with humid life. Shortly after, the mosses glow fluorescent green. When this happens, the new season has officially kicked in.

Now that it’s October, we have been noticing an incredible number of acorns on the several varieties of oak trees that live on our farm, as well as a swath of pine cones on the ubiquitous Douglas Firs. Swami remembers from his Boy Scout days that this can be a sign of a wet winter to come — somehow, the trees know in advance. This super production of acorns is called a ‘must,’ and it happens every seven to ten years, likely due to the expected rainfall. It’s amazing how Mother Nature is so in tune with her varied children. 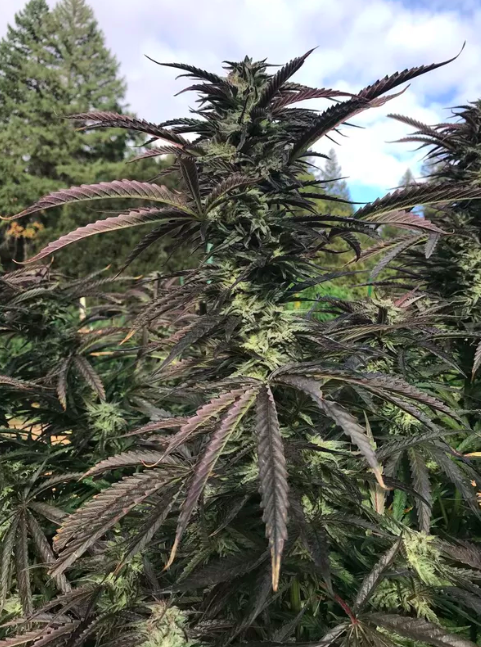 After the rain, the girls in the garden are gloriously verdant and aromatic. They reach upwards as their colas fill out. More and more yellow leaves now peek out among the green leaves as the plants shift their energy from vegetative growth to flower growth. At this point, dried brown leaves should be pulled from the interior, as they can re-absorb moisture after a rain and possibly promote powdery mildew. We already had to spray the garden with diluted hydrogen peroxide because of early morning dewfall, and may well have to spray again after the next wave of rain.

Even though we have healthy plants and are using predatory insects for pest management, it is especially important to keep an eagle eye on the girls. We must look out for mildew, root rot, bud rot, russet mites, branches or flowers that have turned male, and any number of other late cycle threats to the crop. After the rain, the flowering branches are heavy with moisture and can easily break off under the weight. So the thing to do is inspect all around each plant, and tie up the branches that look like they might break off. 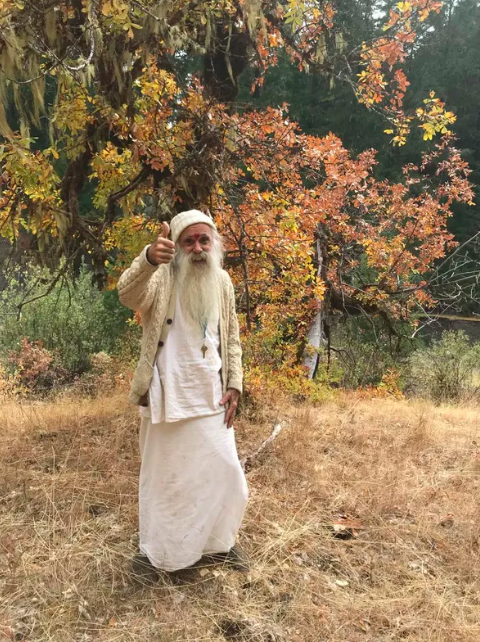 We have been preparing for the harvest for several weeks now at Turtle Creek Ranch. When you scale up your canopy grow area, it also means you have to seriously scale up your drying area. This year, we rigged up a new system in our drying facility with nylon trellis material stapled to 2 x 4’s, and pulleys on the ceiling with ropes tied to cleats — a concept gleaned from working on sailboats in the past. Next, we’ll be hauling up netting draped with weighty branches of flowers, a process not unlike pulling up the mainsail. The whole drying facility has been thoroughly cleaned, and the windows covered with black plastic. It is just about ready for harvest.

As the evenings start to darken earlier, we sit around and strategize harvest procedures and sequences. With the larger plants, we will harvest the whole plant by cutting off full branches. There are also a number of rather small plants which we will cut down whole and hang upside down. There are cultivators who subscribe to the “two cut” or even “three cut” practice, believing that first cutting 8-12 inches off the top of each long branch allows the lower part of the branch to get more light and then grow bigger and more potent. In the past, we have harvested in that manner, but we have never seen the so-called “trophy cut” method actually make a significant difference in total yield or “little bud potency.”

The other members of our cultivating team are also experienced growers, so we often debate about when to do a compost tea — a combination of worm castings, homemade compost, molasses, alfalfa meal, and other ingredients brewed together for up to 36 hours — or whether to skip it altogether. We discuss “how often—how long—how wide” to water, and when we should skip a day or two and stress the plants just a bit. 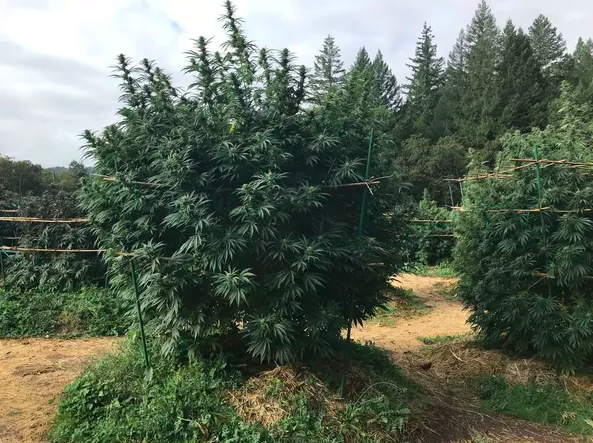 Of course, everyone is speculating how many pounds the whole crop will yield. It is hard to guess because there are some Big Girls, yielding at least 4 pounds each, and a few tiny ones that were planted very late and will produce maybe 8 ounces each. There are tall ones, short ones, skinny ones, fat ones, sparse ones, dense ones, purple ones, green ones, yellow ones, pink pistils, yellow pistils, brown pistils. They are sisters and cousins, aunts and nieces — since even the same genotype can present minor phenotype variations. When you grow from seed, it’s as varied as any family can be.

This year we have ten cultivars (aka “strains”), including some we have developed ourselves over the years — such as Hindu, Shakti Pot, and Queen of Hope. We have some yummy varieties from master breeder Mean Gene — Black Lime Reserve and Deep Cherry. Swami Sherbet comes from the Emerald Cup breeders and we’ve added some new cultivars to our family, such as Mendo Pakalolo, Headlights, Chem Four, and Mountain Berry. 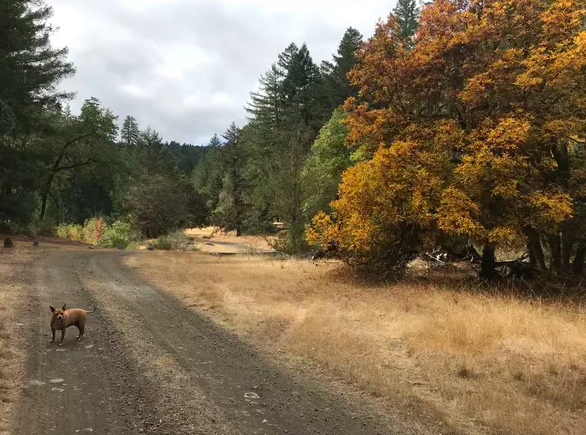