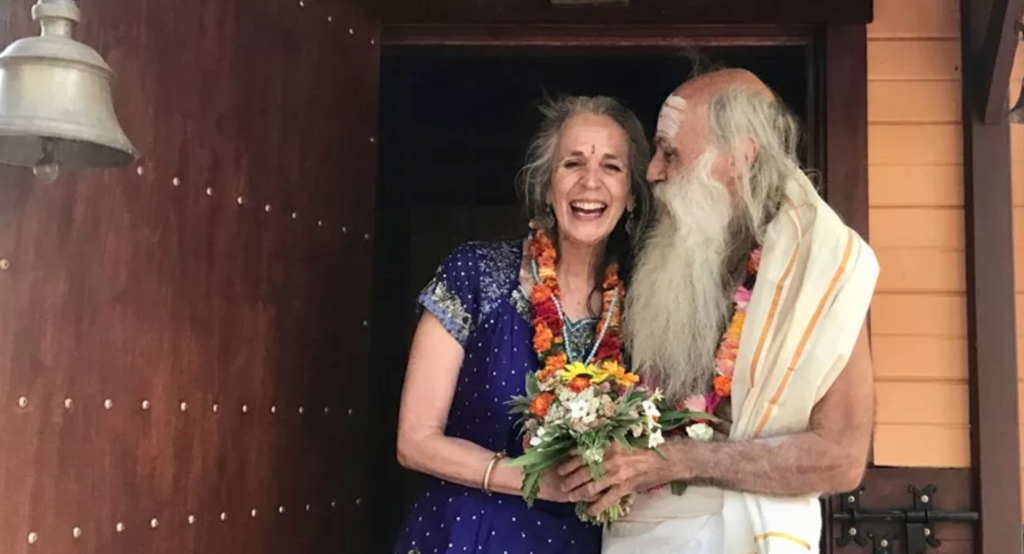 “To celebrate Valentine’s Day and the connection between cannabis and cupid, Emerald Triangle couple Nikki and Swami reflect on the impromptu weddings they’ve organized at their gorgeous ganja garden over the years.”

This piece was originally published on MERRY JANE on February 14, 2019.

As you may know, Lady Cannabis can be Cupid’s assistant. She’s been known to help him aim an arrow at someone dear, and then — bam!— they fall in love. Her magical powers can open hearts to the wonders of the universe, internally and externally. And when your home has a garden full of such luscious Girls, you can expect lots of love to come into your house!

We have hosted the marriages of a few friends here at Turtle Creek Ranch in Mendocino, and each was precious and unique. The very first one was the mini-rave wedding reception for a young city couple, after they had exchanged vows in a hot air balloon over Napa Valley. Then, we hosted a full-on Hindu ceremony — complete with a Brahmin priest from India — for friends who are Hare Krishna devotees. Another time, Fuzzy and Amy from town got hitched here on March Fourth (as in March Forth), and took over our barn to serve a lobster dinner. And there was the wedding reception of fellow cannabis farmers Casey O’Neill and Amber Cline, who live up on top of the ridge. The land visibly blossoms each time a wedding takes place, or, for that matter, every time a child is conceived (which has happened here, as well). 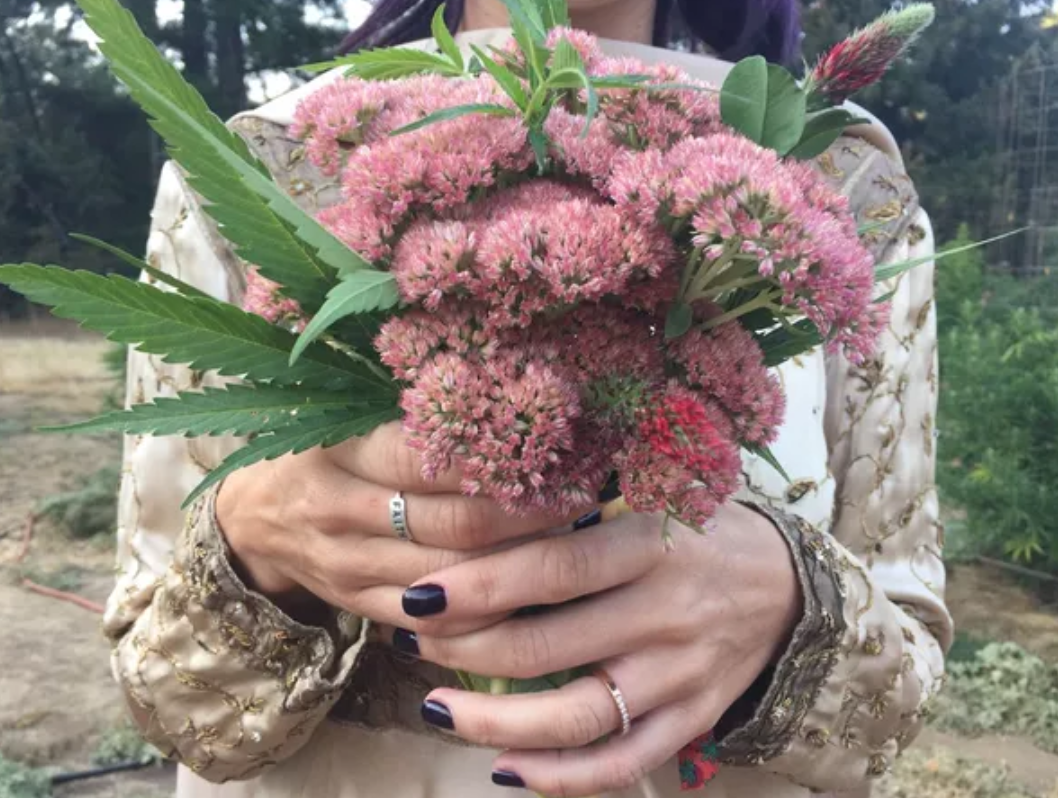 Perhaps the most unusual matrimony celebration that took place on our farm was also the simplest. It began several months before, when we received an email from a couple living in Dubai who saw us on the VICELAND Weediquette episode about The Emerald Triangle. They wrote that they were headed to the West Coast for their honeymoon and would love nothing more than to see the Redwoods and a cannabis garden. Considering they lived at the edge of the vast deserts of the Arabian Peninsula, we thought they must be longing for some greenery. We don’t normally invite total strangers to come up to the ranch, but for some reason we said sure.

After hearing nothing for about six months, we forgot all about it. Then, sure enough, Leah and Nick wrote saying they were on their way, and would arrive on a certain Saturday in September. We had a booth at the local Cannabis Farmers Market that day, so the plan was to meet up there, bring them out to the ranch for a smoke and quick tour of the garden, and then they would spend the night at their hotel nearby. They arrived as we were closing up our booth after a fun day at the market. And it turns out that they were indeed a lovely young couple. Leah was British and Nick was Dutch, but they both had grown up in Dubai. Very sweet.

The couple followed us up into the hills of Northern Mendocino County, deep into the heart of the Emerald Triangle. We drive up the twisty dirt roads so often that we take it for granted, but most of our first-time visitors arrive in partial shock. “This is really out there!” is the most common expression when guests emerge from their cars. It’s true, we really are at the end of the road! And coming from Dubai, where it’s flat as a pancake, one can only imagine their delight to witness the Douglas fir and Redwood-clad mountains.

As usual, our house was a busy scene with friends and farmers. Joining a group in the living room to smoke a famous Swami joint, they sat right down and fit right in. Shortly, Leah joined Nikki in the kitchen to get some drinks for everyone and they got to talking.

“So how was your wedding, Leah?” Nikki asked, remembering they were here on their honeymoon.

“It was lovely, but more like a spiritual marriage with all our families there. Now we’ve come to America to have the official marriage… in Las Vegas,” she replied.

“Las Vegas!” That was a surprise. “Wasn’t the last marriage good enough?”

Leah explained that their families lived all over the world, and so they chose a central place to have a family gathering for their dream marriage. When asked where they chose, she described the scene, “It was on the island of Ibiza, off of Spain. On a cliff overlooking the Mediterranean…”

“And who married you? Did he speak many languages?”

“Yes he did, which was great for all our families,” she answered.

“And was his name Melchior?” Nikki asked with an arched eyebrow.

Leah was stunned. “How do you know that?” she asked incredulously.

“Because he’s Swami’s son,” was the simple reply. 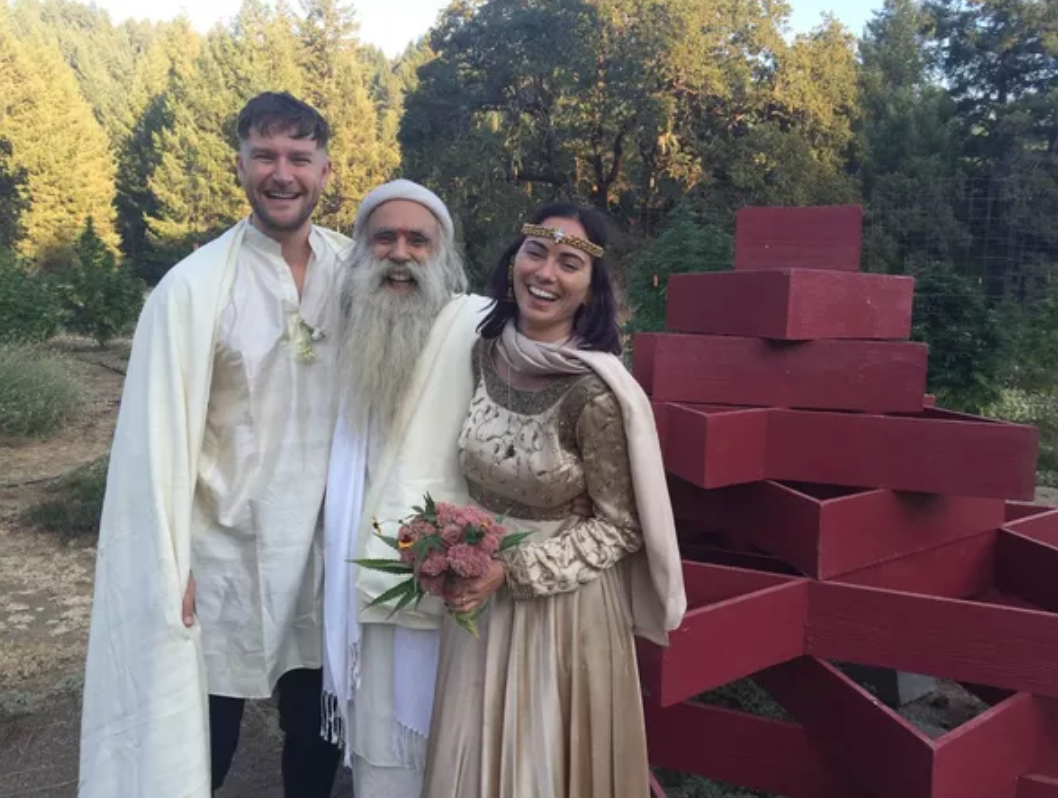 It still gives me shivers to think of how we stared at each other in awe as we grasped how incredible this was. We had somehow magically selected these two people out of literally thousands of emails to say: “Yes, come visit our ranch.” Out of all the places in the world, they initially had chosen the island of Ibiza to gather their families, and they found Swami’s son, who lives there, to perform the wedding. And now, here they were, in our home. It really was extraordinary. Almost stranger than fiction.

The next sentence out of Nikki’s mouth was inevitable. “Well then, if Melchior married you in Ibiza, it seems you should get married here by us! Swami has a minister’s license, so Melchior’s father will marry you officially this time!”

And so it came to be. Here were these two beautiful young people, coming from a place of sand dunes instead of soaring evergreen trees, from a country where possession of a gram of cannabis means jail time, about to be married in a Mendocino cannabis garden. We agreed they would return to their hotel for the night, and when they came back we would have their wedding sequel. 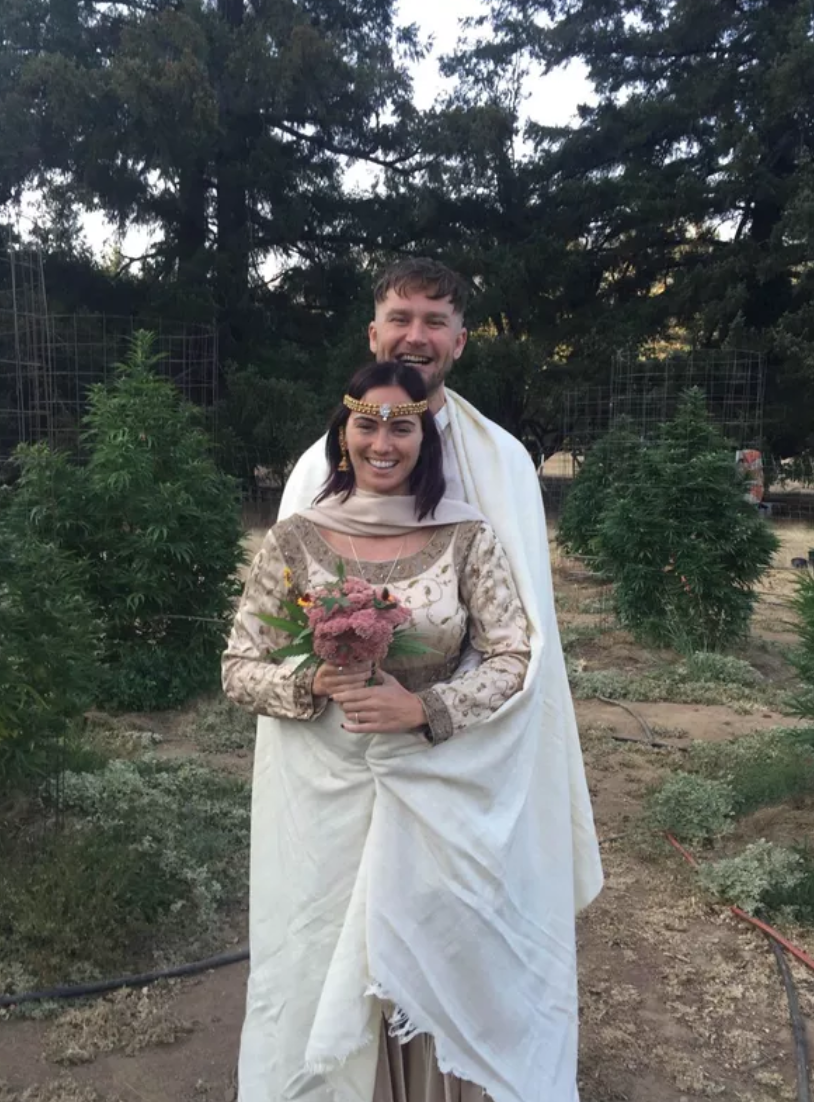 It was a perfect wedding with virtually no planning. Naturally, the couple was unprepared, so Nikki dressed Leah — as well as our visiting friends Cassie and Emma who were the bridesmaids — in some elegant Indian evening wear. Swami outfitted the men: Nick, the groom, in a white silk kurta (an Indian-style shirt) with a long raw silk shawl. Our tall, red-headed friend Max wore a white jacket with sequins. Swami wore his Swami-best, while Nikki posed as the mother of the bride in a long evening gown. Max, in a dual role, played Father of the Bride and Best Man.The bride’s bouquet was a fresh mix of flowers from our gardens, both cannabis and other varieties. Following some pre-nuptial joints, the marriage party processed across the big meadow on our ranch, all the way out to the garden. Max, as the makeshift “father,” escorted the bride down the “aisle” between the tall ripening cannabis plants, with the bridesmaids holding her train. It was all very formal, yet California-style. Swami offered a spontaneous and sweet blessing, and then the couple exchanged personal vows. The “mother” of the bride shed a few compulsory tears and the “father/best man” gave the groom a big hug. The gods of Love were invoked, the couple kissed, and we sang the wedding march as we exited the garden all together.

The ceremony was followed by celebratory joints, champagne, and a wonderful feast — then some more joints and a yummy cake we’d made, too. The lucky couple spent the night in our “honeymoon suite” (the guest room), complete with rose petals festooned across the bed.

With very little planning, we had hosted a beautiful private marriage ceremony in the midst of our cannabis garden for Leah and Nick from Dubai. While most couples spend months planning and thousands of dollars, we’d put together a full wedding in a day for next-to-no cost.

The following summer, which was also the 50th anniversary of the Summer of Love, we  decided to celebrate our own marriage again — for the third time — here on our land, at our Goddess Temple… but that’s another love story for another Valentine’s. Once again, cannabis flowers adorned the bouquet and Ganja Ma showered her blessings on the wedded couple. And once again, Cupid got an assistant from Lady Cannabis.

[Editor’s Note: Before you email us asking to book a wedding at the Swami Select ranch, you should know they are not in the business of regularly hosting marriages at the ranch… but there is always serendipity!]