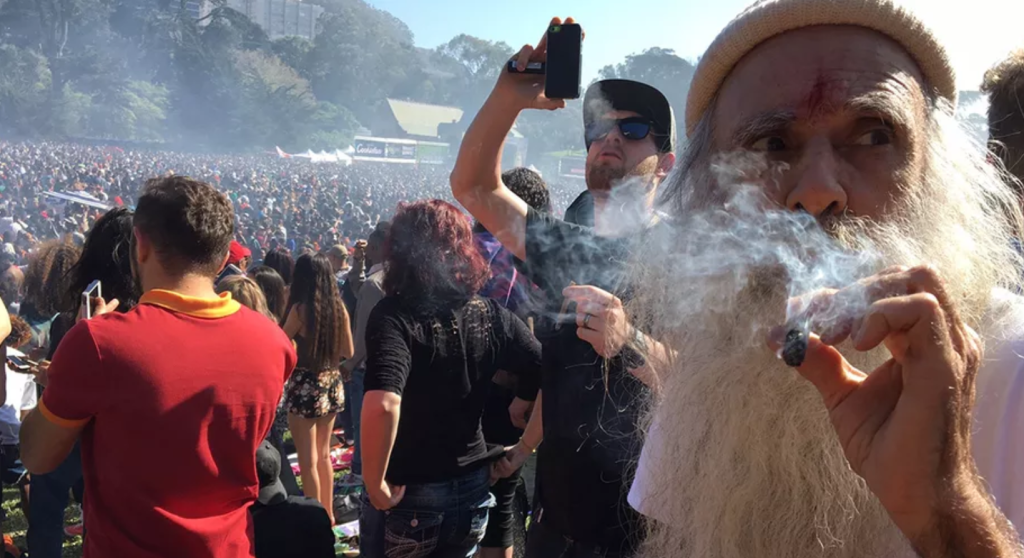 “For years, thousands of fans of the herb have celebrated all things ganja on 420 Day. But who would have imagined a time when Baby Boomers would join the party?”

This piece was originally published on MERRY JANE on May 1, 2018.

In honor of the most recent 420 Day, and all it proudly stands for, we smoked a fatty before writing this column. We wanted a little inspiration, you know?

We have built a culture around cannabis, one that is here to stay. Consider the whole concept of “420.” It started way back in the ’70s in Marin County, California, just across the Golden Gate Bridge from Haight-Ashbury. As the legend goes, a bunch of high school kids met to get stoned every day after school at exactly 4:20pm. Well, maybe they met a couple minutes late on occasion— after all, they were stoners.

Here we are, nearly half a century later, and the weed world still treats the tradition like it’s law. Our culture has adopted the trope in every imaginable form: not just as the de facto smoking time, but also as the April holiday date, as well as a smoking signifier used for everything from apparel and social media handles, to websites, brands, and even licenses plates. Where you find weed, you’re likely to see those three digits. Hell, we wouldn’t even be surprised if Hallmark started making 420 greeting cards! Maybe one day it will be adopted as a federal holiday — though we won’t hold our breath.

Last year, during the 50th Anniversary of the Summer of Love, we were in a crowd of ten thousand people at Hippie Hill in Golden Gate Park at the sacred hour, on the sacred date, with the sacred herb, sharing it with our fellow celebrants. A hint of valor was in the air, as cannabis was still technically illegal in the state. After all, so many people have been busted for smoking pot at big outdoor events in California throughout the years. We couldn’t help but remember how in the ’60s, the cops on horseback or powder-blue motor scooters used to ride to the top of Hippie Hill from behind the crowd in order to surprise the smoking enthusiasts. In a panic, everyone would hide their stash and rush down the hill as the cops rounded up the stragglers and took a few token hippies to jail.

For comparison, during this year’s 4/20, we were in the California desert, speaking at the inaugural Palm Springs Cannabis Film Festival and Summit. It was a delight to discover a large population of sweet and sophisticated snowbird seniors who sponsored the event. The three hundred attendees were primarily cannabis-curious elders and potential venture capitalists. There were also a few young entrepreneurs from the burgeoning cannabis scene in the Coachella Valley, eager to soak up some knowledge from the growers, distributors, manufacturers, and retailers from the mountains of NorCal — folks who made the journey south to the desert to participate in numerous panel discussions. It’s a reciprocal thing: we need to learn about what’s going on in SoCal, while the community in the south needs to have access to sungrown, artisanal cannabis flower and medicinal products, as well as the wisdom of The Emerald Triangle’s pot pioneers.

With giant, three-acre indoor grows sprouting up on the outskirts of Palm Springs, Desert Hot Springs, and Cathedral City, it cannot be denied: the legal cannabis industry is becoming omnipresent throughout most of California. It is difficult, however, to ignore the irony that farmers in the heart of the desert can grow as much as they want, while here in the mountains of Mendocino County — the best terroir for cannabis cultivation on Earth — we have strict limitations. Due to the extreme heat of the desert, plants can only grow indoors under lights. It was a relief to encounter a couple of farmers at the film festival who are actually doing it right, using solar power and sustainable farming practices. But they are few and far between.

For the senior population (and we are among them), many are beginning to see cannabis as a godsend. It means pain relief, a good night’s sleep, and a way to have fun with your friends. Clearly, the seniors who got “high” back in their youth are ready to party again. Of course, we never stopped.

The difference between this year’s high holiday and the year before was astonishing. For years, thousands of fans of the herb have celebrated ganja on 420 Day. But who would have imagined a day when Baby Boomers would join the party? And Republican senior citizens at that! It’s a whole new ballgame, to say the least. The gospel of cannabis is spreading to the masses. We are no longer outlaws. Well, for the most part…

“How do I get rid of this darn hip pain?” one senior asked at the 420 Day event in Palm Springs. Another volunteered, “My granddaughter bought me this cream and it really works.” A guy in a polo shirt and shorts, fresh off the golf course no doubt, lamented that the kid at the dispensary tossed a complimentary cookie in his bag. “It was delicious when I found it a day later. I ate the whole thing, and couldn’t move for two days after that.” The knowing chuckle throughout the theater suggested that several others had similar experiences. Afterwards, a guy in his late sixties in a Hawaiian shirt and Bermuda shorts offered me a vape pen, claiming it was the best. This prompted a big laugh from a friend who knew of our predilection for pure sungrown flower.

“In the month of April in 2020, it will be 420 every day,” exclaimed one jubilant attendees with a thrilled expression, proudly smoking a joint in front of the whole crowd. “It’s a holiday!” And that is just what we all need right now: A reason to get high, a reason to celebrate, to relax, and to feel good. Despite all the pressure legalization has put on longtime growers, it’s time to “let it all hang out.” That’s part of the hippie philosophy. From what we are seeing of the newest generation of emerging cannabis fans, the spirit is still alive.