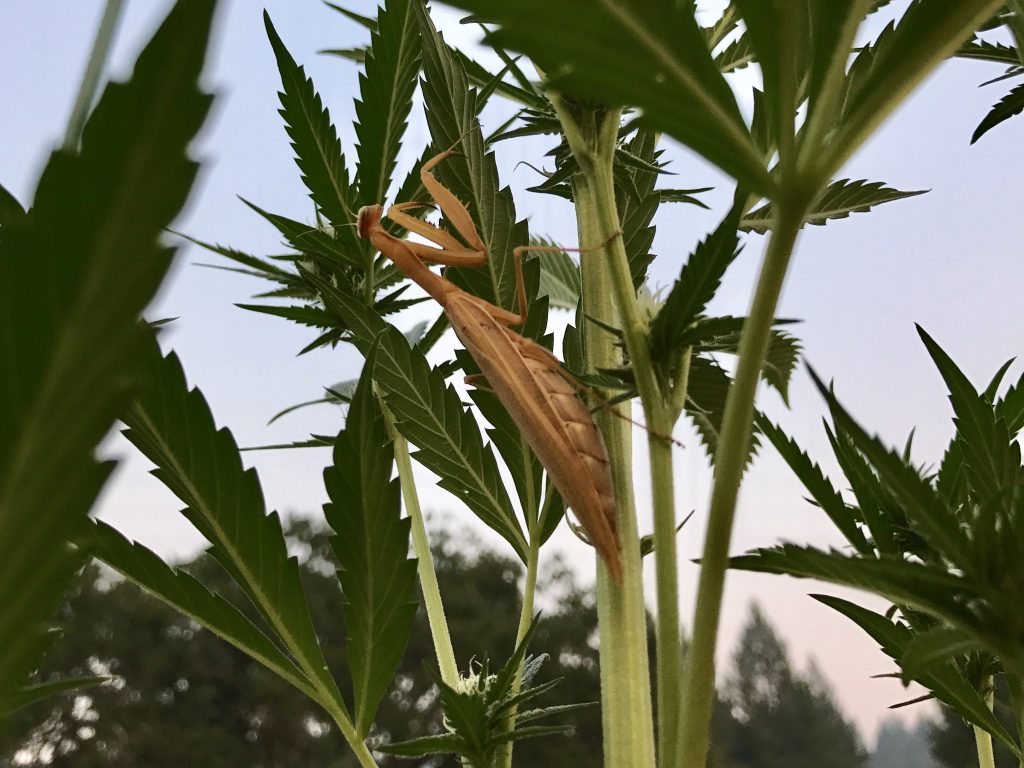 Pesticides and fungicides are a major issue for cannabis growers and consumers. It should be avoided at all costs. The presence of chemical contaminants in medical or adult use cannabis can result in serious side effects which endanger patient health while negating the plant’s positive effects.

All summer long, farmers have to deal with voracious insects munching on tender green leaves. Then as the autumn rains begin to fall, each farmer faces the dilemma of how to protect their precious crop from mold and mildew, and still only use organic methods. There are numerous pesticides and fungicides approved for conventional (what I call “corporate chemical”) agriculture, and even some with OMRI approval. As of now, however, none are actually allowed on cannabis. This isn’tsurprising. Because of the illegal status of cannabis, very little research has been done on the effects of pesticides or fungicides on humans when the article sprayed is then combusted through smoking the herb. Most fruits and vegetables are sprayed, but they are usually washed and rarely smoked.

Tobacco, however, is smoked. And as you might expect, a quick web-site check reveals that “90% of tobacco is full of pesticides…” and “researchers have found over 4,000 chemicals and pesticides in cigarettes.” For obvious reasons, this news is suppressed by Big Tobacco.

Cannabis does not have the powerful lobbyists and well paid lawyers like the tobacco industry. As a result, in nearly every case, the proposed rules and regulations for cannabis are many times stricter than any other crop. Perhaps it is a good thing that the rules for cannabis are so extreme. For the health of all consumers, the same standards should be applied to all agriculture. At the moment, there is very little organic tobacco available on the market, but organic pesticide/fungicide free cannabis is the wave of the future.

A recent survey undertaken by NBC News demonstrated the prevalence of contamination in the current cannabis market. Their reporters went undercover to 15 dispensaries in the Los Angeles area and purchased 44 different products of numerous types.  In each case they asked the sales person if the product was pesticide/fungicide free (not organic, mind you, just chemical free) and received assurance that it was. NBC than sent the products to a testing lab. The results were astounding. 41 out of the 44 were found to contain one or more contaminants.

One of the most common of these chemicals is Myclobutanil, approved (but not organic) for use against powdery mildew on grapes, plums and other hard shell fruit. These products are washed prior to sale and consumption, which removes much of the contaminant. Plum skins are obviously not smoked. Further, cannabis flowers are covered in delicate pistils which are sticky with resin. Anything sprayed on them will not come off. The problem is that myclobutanil turns into a cyanide gas when combusted.

Clearly the farmers must be very conscientious in what they use on their crops. However, since all these chemicals not approved for cannabis are in common use for all other agriculture, there are great risks of open field contamination. First, there is “blow-over” from an adjacent field where another farmer is spraying their broccoli, for example. Apparently, up to 30% of crop dusting may drift on to neighboring fields. Second, the soil itself is contaminated with many years build up of chemicals in many areas. Since cannabis is particularly adept at extracting things out of the soil, a farmer growing on land previously used for conventional agriculture runs the risk of absorbing those chemicals thought the roots. It is in the valleys zoned for agriculture for the past several decades where the most pesticide/fungicide problems occur, whether intentional or not.

This presents some problems for the farmers in those counties which are determined to drive all the growers out of the mountains and into agricultural land. Mendocino is one of those counties. The issue of concern is that in our county less than 3 per cent of available land is zoned AG Land, which is  already owned and under agricultural production. On the other hand, about 90% of the available land is zoned Range Land, Forest Land or Timber Production Zone, which are permitted to grow Row and Field Crops. If one cannot prove they had grown cannabis in these zones prior to January 2016, they will not be allowed to grow there after 2020. Further, someone permitted to grow on their land in Range Land, TPZ or Forest Land zones, is not allowed to transfer that permit to any other person besides their heirs. The net effect is to devalue all of that land whose real estate value for the last 40 years has been based on the ability to grow cannabis there. (See Swami previous journals on this topic: “Mass Extinction Threatens Mendo Growers”  and “Permission to Move in County Denied.”)

But where will these growers move to if they must vacate their mountain land? With so little Ag land available its price will skyrocket. But it has just been shown that Ag land is chemically polluted and pesticide/fungicide blow over is unavoidable, so this land is not suitable for growing pure cannabis without expensive reconstructive work and elaborate specially designed greenhouses.

Conscientious farmers use alternative methods such as Integrated Pest Management, bringing in beneficial insects such as lady bugs, preying mantis or predatory mites. Even a solution of Rock Salt can help control mildew, while growing with regenerative techniques promotes the health and strength of the plants, increasing their resistance to pests and mold.

It turns out then, that the best place to grow cannabis is in fact in the mountains where there is the cleanest air, soil and water in the country, far away from the contaminants plaguing conventional growing methods. The best way to grow pure cannabis is to use organic methods in living soil in the pristine mountains of Northern California.