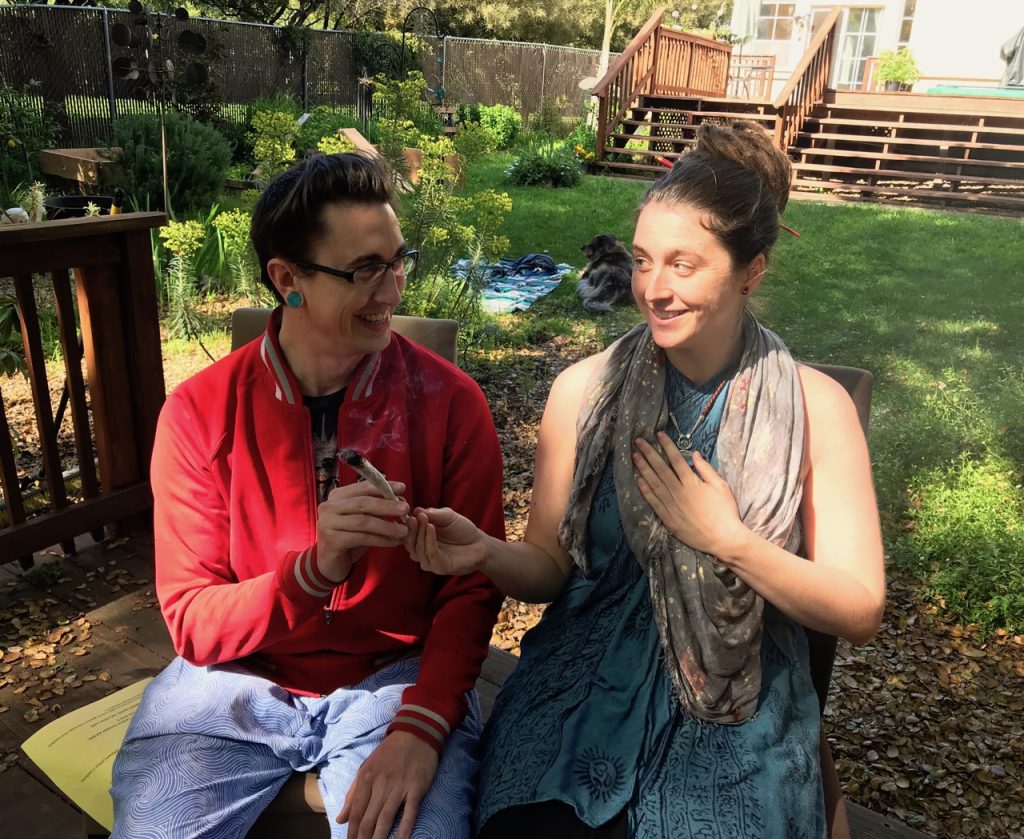 This piece was co-authored by Swami Select Founders, Nikki Lastreto and Swami Chaitanya.

It was a perfect spring day in the hills of Contra Costa County: blossoms on the plum trees, birds tweeting entire arias in the budding foliage. A warm April sun beamed proudly after days of rain showers, which had left the earth smelling rich and full of promise. It was Sunday, and Nikki and I went to Church, not HashChurch this time, but not really church in the old sense either. Rather, it was The Church Of Cannabis, aka Cannamaste.

Through the Cannabis clan circle, we have been blessed to meet Mikki Norris and Chris Conrad, well known human rights and cannabis activists. They graciously invited us to join the newly unfolding ritual cannabis celebration they have envisioned for several years. Putting cannabis activism aside for the afternoon, these two high-spirited individuals—in every sense of the word—had chosen to devote energy to the spiritual side of Cannabis. This was the fourth meeting of the minds, intending to create a Creed, a Code and a Ceremony— including special prayers and invocations—and to bear witness to the many blessings of the Sacred Herb. The premise seemed right up our alley. I maintain that many people’s first use of cannabis is for Inspirational purposes, for Creativity and Introspection.

We arrived simultaneously with Terry Haggerty and Katie Gurthorn. Terry is both a highly regarded cannabis geneticist and a famous musician, playing inspired lead guitar for the Sons of Champlin, back in the day and still shredding it now. Katie is a notable vocalist. She has performed with many rock-and-roll legends and now works as voice coach in the Bay Area.

As with any ritual, an integral part is the preparation of the site and of the sacrament. While Nikki, Mikki and Katie created an altar to Cannabis under the gigantic Live Oak tree in the back, Chris, Terry and I set about grinding and rolling the day’s offerings. Chris crafted a gigantic five-paper joint with filter using flower contributions from many celebrants—a Spiritual Blend—as our ceremonial joint. Soon, the other participants arrived, bringing our total membership to 12.

It was a very interesting afternoon to be part of the creation of a Religion. Several years ago, Chris had an epiphany concerning the spiritual nature of cannabis. He channeled a Creed in the form of a Statement and Response from the assembled celebrants. The concept of Cannatheism and the greeting “Cannamaste” were also revealed to him. The Sanskrit word Namaste translates to “I salute Divine in You”. Cannamaste means, “I salute the divine in Cannabis and in her celebrants”.

At that time, however, friends and advisors in the activist movement said to Chris that the need of the hour must focus on medicinal and recreational legalization for patient protection and for social justice. They encouraged us to pay special attention to one issue at a time. Thus, the theology of cannabis was put on the shelf while medicinal and recreational issues took center stage. While they remain works in progress, now, at last, it is time to go deeper into Cannabis Consciousness.

To this end, Mikki and Chris are convening meetings of people who share this reverence for the divine essence of Cannabis to basically gather for a spiritual smoke-in. One of the functions of this particular convocation was to continue refining the elements of establishing a Church. They are well aware of the specific practices which, through official case histories, have come to form a legal definition of a Religion or a Church. Mikki and Chris have always been adamant defenders of cannabis users and recognize that a Cannabis Church, with the herb as the sacrament, could be a protection against persecution even in states without legal access.

Perhaps even more importantly, it is the affirmation of the true divine nature and power of the Sacred flower and her derivatives which brought us together. The ceremony began when Swami blew a conch shell as everyone fervently rang bells, announcing to the Goddess of Cannabis – Ganga Ma – that her devotees were present and prepared to worship. Nikki proceeded to chant appropriate Sanskrit mantras to invoke the Goddess and ask for her blessings. The sacred fire was passed and off of it the the ceremonial joint was sparked and ritually passed.

What makes this different from a bunch of friends getting stoned? Intentionality. The protocol to pass the joint to one’s right, using the right hand, while covering the heart with the left hand and reciting “Cannamaste,” became a form of consecration. The recipient, likewise, covers their heart and receives the joint in their right hand. For the sake of good health, the “chillum style” of puffing is recommended.

When the ceremonial joint passed twice around the circle, the Cannabis Creed was recited with Chris intoning the Statement and the celebrants chanting in Response. A lovely and relaxing guided meditation and period of silence followed, capped off by a second round of the “Holy Smoke”.

Since this is a ritual in formation, after the second smoke round, all of these actions were discussed, alternatives proposed, meanings revealed and a rationale for each component was agreed upon. Smoking during the ritual is significant in that burnt offerings are an essential part of many religions. Fire transubstantiates and purifies and smoke carries the intention of the offering upward to the deities.

As part of the discussion of this Religion in embryo, Swami offered a description of the attributes of the Goddess Ganja Ma, whom he and Nikki have channeled and installed in the cannabis garden on their ranch. They also taught the Cannabis mantra that was downloaded as well.

This triggered a lively discussion, which is also an element of the ritual, “bearing Witness”. Terry Haggarty opined, “Cannabis gives you permission to do things.” Other celebrants mentioned the augmentation of the five senses that leads to higher awareness and helps participants transcend linear thinking, stimulating their creativity to intuitive inspiration.

After agreeing to a time and place for the next convocation, we ritually smoked the closing joint after which the group chanted three AUM-s in unison. Then we went inside to a delicious potluck feast. AUM, AUM, AUM, CANNAMASTE

Cannabis Sativa, L. is the Useful Cane and the True Hemp

Therefore, we honor it with high honor.

Cannabis hemp is a restorative natural resource for all to grow, share and use and humanity has a unique and shared history with this plant.

Therefore, we bring cannabis into our lives.

Cannabis hemp is endowed with safe and effective healing powers,

some of which remain unexplained.

Therefore, we offer cannabis to ease suffering and add balance to life.

Cannabis hemp is an intuitive sacrament we use to connect with ourselves and our community.

Therefore, we share cannabis in thanksgiving and deep respect for her resinous effect.

The virtuous cultivation and dissemination of cannabis are honorable professions.

Therefore we act with integrity and honesty to safeguard fellow Cantheists

Inhale and pass it on.