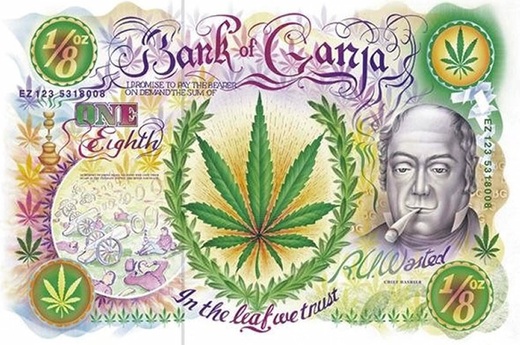 What’s the best unkept secret in Nor Cal? Why won’t anyone talk about the veritable herd of elephants in the room? Because everyone’s making too much money. That’s why many voted against Prop. 19 in 2010: it’s too good the way it is. But that’s about to change.

In order to realistically deal with the new regulations sure to come, and to protect the livelihood of the small cannabis farmer, the first need is to stop considering it a crime to grow a legal crop which is in demand as medicine.

The second is to get some real numbers regarding the actual economic contribution that cannabis has made to Northern California for the last forty years.

How much money does cannabis really bring into Mendocino County? How can one get a handle on this vast underground market, when there is no economic data generated? Where does one get real up to date numbers on the crop which is truly the driving force of Mendocino, Humboldt and Trinity counties?

In 2010 a Mendocino County Grand Jury questioned the sheriff about the number of marijuana plants in the county. He testified that he had eradicated 541,000 plants in 2009 and estimated that was 10% of the total number. According to this testimony then, there were 5,410,000 million cannabis plants in the county in 2009. If we assume that each plant yields one pound (to use a low-ball number), and that the wholesale price is $1000 a pound (another low-ball number), we get 5,410,000 pounds of flowers at $1000 which equals $5.4 billion dollars. I’m not sure I believe this number, but it originates with the Sheriff.

So according to two official government estimates of crop size (if we can be reasonably certain that these officials are not gratuitously inflating their numbers), the revenue generated from the wholesale price of flowers alone would be somewhere between 2.6 and 5.4 billion dollars!

It is informative to look at cannabis in relation to other agricultural crops. How does Mendocino cannabis revenue compare to county wine grapes? According the the Mendocino Economic report for 2014 the highest earning agricultural crop in the county was wine grapes, bringing in $103,000,000. That’s one hundred three million dollars. Total revenue from agriculture and timber combined in 2008 was $147,950,000. Since many of these vineyards and the timberland are owned by out of county corporations, much of that revenue leaves the county

Cannabis from Outlet Creek alone produced $26,000,000. Cannabis wh
olesale flowers generate 25 to 50 times the revenue of grapes, but they aren’t even listed in the report. Who’s kidding who here?.

For another comparison, the four major tobacco companies combined generated about 70 billion dollars in 2014, but the health costs of tobacco addiction are virtually inestimable. The only negative health costs of cannabis come about because patients are unable to obtain the medicine. If the Emerald Triangle does indeed supply 60% of the US market, then perhaps six to ten billion revenue for each of the three counties isn’t so far off.

However, the economic benefit of cannabis does not stop with wholesale flowers. There is also the sale of “little bud” or “smalls” and “trim shake”. Both these have become valuable as the source material for post-harvest manufacture. A two pound plant will produce a half pound of smalls and a quarter pound of shake,which sell for around $500 a pound, with no extra water. This wholesale market adds another nearly 10 million dollars to the 2.6 billion dollars from the flowers.

In the dairy industry, value added processing, such as cheese, butter, yoghurt, kefir, etc., adds about 15% of the revenue that comes from milk itself. This percent could be even more for cannabis by-products. Applying the 15% value added model to cannabis, one gets an additional $390,000,000 to $811,500,000 to the wholesale flowers, smalls and trim revenue. So the total wholesale market for cannabis brings in three to six billion dollars.

Further economic benefit derives from the several dispensaries in the county, which provide essential medicine in many forms to numerous patients, many from out of county. These Dispensaries provide jobs and pay taxes. Also sold in dispensaries and in the underground market as well, are seedling starts, clone starts and seeds.
In addition, some of the wholesale flowers are resold in increments of 1/8, 1/4, 1/2 ounce in the county at retail prices in the underground market. Although the value of this black market retail revenue is difficult to specify, it must be in the millions, if not billions.

Where is all this money??? Cannabis growers, by and large, live in the county. Most of this billions of revenue gets spent in Mendocino on food, clothing, mortgages and rents, vehicles, building materials, household goods and myriad other consumer items, as well as all the materials needed to grow cannabis purchased from the nurseries. Every shop keeper, nursery owner and auto dealer owes their profit margin to cannabis growers’ consumer prowess.

Higher real estate values due to cannabis cultivation may prohibit some low income buyers from living here, but the resulting higher taxes support the schools, maintain the roads and provide other county services. Real estate values in the County are directly tied to the cannabis industry and to water availability. Many land sales are cash or “owner will carry”. As recently as 10 years ago, one could pay off a fairly large mortgage after 3 or 4 crops at $4000 a pound.

There is also no doubt that marijuana busts contribute heavily to the Sheriff’s Department budget and redecoration efforts through asset forfeiture, the extortionate 9.31 program and plea bargain settlements with the DA’s office. Certainly many lawyers have made a good living through their efforts to keep the cannabis farmers out of jail, so that patients might receive their medicine.

To complete the estimate of the positive economic effects of cannabis farming, one must consider jobs. Growing cannabis is labor intensive. In canvassing numerous farmers, it was estimated that for every 50 plants grown, at a minimum, two farm laborers were necessary. This work entails such jobs as fence building, turning the soil, planting cover crops, harvesting and composting same, starting seeds or making clones, transplanting several times, erecting trellises, fertilizing, watering, yellow leafing, harvesting, hanging, bucking, trimming (the most labor intensive), bagging, weighing, storing. The average pay is between $15 and $20 dollars an hour, way above minimum wage. These workers also spend some portion of that income in-county as pizza and beer sales skyrocket in harvest season.

Clearly many of those cannabis workers are family members and many are local, but many more come from elsewhere. They are called “Trimmigrants”, and they do come from all over the world in September and October to trim cannabis. The Emerald Triangle is world famous. These people are “seasonal migrant workers”, who appear on no census but flood the county every summer and autumn to produce the 5 million pounds of flowers. Cannabis is the major employer in Mendocino County.

Any enterprise which employs over a hundred thousand people and garners billions of dollars in revenue would normally be considered the most beneficial operation in the county, rather than a scourge to be eliminated. Other agricultural enterprises justify their existence and rationalize there water consumption by the revenue they generate and by the jobs they create. Cannabis farming in Mendocino County dwarfs all other agricultural pursuits in jobs created and revenue produced while using the least water. Beware those who wish to kill the goose that lays the golden egg, or those who want to sell the goose to the mega corporations.

No matter what the actual numbers really are (and these estimates, beginning with government numbers, are admittedly hard to believe), it is abundantly clear that the economic prosperity of Mendocino County is dependent on the health of the cannabis industry. It is incumbent upon the government powers that be, on the county, state and federal level, to protect the livelihood of the small heritage specialty cultivator of cannabis flowers or watch the counties of the Emerald Triangle slip into economic depression.

If the politicians can take the lead, we can embrace this change and see in it an opportunity to encourage small scale organic farming in harmony with the environment and at the same time continue the prosperity of Nor Cal, through the cultivation of high quality organic sungrown connoisseur cannabis and through developing Canna-tourism and retail outlets. And most of all, through honoring the contribution that cannabis continues to make to our county, our culture, our country and to all the people who use cannabis medically and inspirationally.