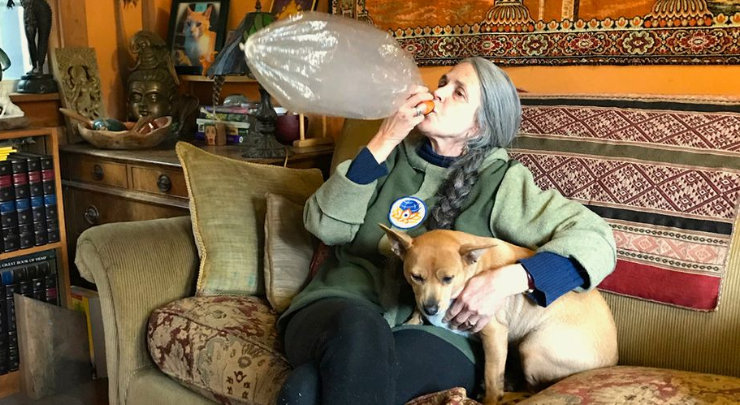 By Nikki LastretoNotes from Nikki, Swami SaysNovember 20, 2019
After being diagnosed with chronic obstructive pulmonary disease, I needed a new way to assess the flower entries for the Emerald Cup. So, I got myself a dry herb vaporizer for the first time. Can an old stoner learn some new tricks?

This piece was originally published on MERRY JANE on November 19th, 2019

All photos courtesy of Swami Select

Cannabis is truly the ultimate teacher.

I have respected and honored her wisdom for over 50 years, and, in return, she has guided me on a path that I could never have imagined.

She has been my ally in times of need, my playmate, and my personal shaman.

Smoking a fat joint has been part of my daily ritual for more than three-quarters of my life, and I have trusted that she will always be there for me. But like everything in life, sometimes we need to adapt to changes and go with the inevitable flow.

After being diagnosed with mild to moderate chronic obstructive pulmonary disease (COPD) last April, I realized I needed a new way to spend time with my old girlfriend, cannabis.

Combustion from a joint was the last thing I needed. And although I know the disease was not caused by my smoking weed all those years, certainly continuing to breathe in the smoke was not helping it, either. It was time to look for the silver lining in this situation.

As a Flowers Judge in The Emerald Cup since it began in 2003, I know that every year at this time — right after harvest — the entries start coming in. Last year, we judged over 400 samples, so I imagine it will be the same more or less this year.

OK, so I can still certainly rate the appearance, the smell (terpenes), and even the flavor via a “dry hit” of the buds without actually inhaling smoke. But the looming question was how to fairly judge the actual effects of the flower entries without burning and consuming each one.

Swami and I always do the sampling together and submit our combined scores. We are a solid team. This year will be no different, and after much research, I think we finally have a plan.

First, I invested in a Mighty brand herbal vape device.

It’s bigger than sleek pocket versions, but works a whole lot better. Because let’s face it, I have a very high tolerance.

It takes me three to four bowls on the Mighty to really feel it, as I am so used to those full hits off a fat Swami joint. After trying it for the first time, I was like, “So where’s the weed gone?” since so little vapor came out of my mouth after a large inhale.

“Hello? Am I feeling anything yet?”

I knew it would take some time to relearn how to get high. Could I teach an old stoner (myself) new tricks?

So I did more research, and all paths led to the Volcano being touted as the best vaping device for flower around. Made by Storz & Bickel from Germany, the same company behind the Mighty, it is pretty much the Mercedes Benz of vapes.

I had tried one of the older models years before with a friend, and must admit I felt pretty darn silly smoking out of that big balloon. I have always preferred things natural, and all that plastic between me and getting high seemed just wrong.

But perspectives can change when health dictates it. 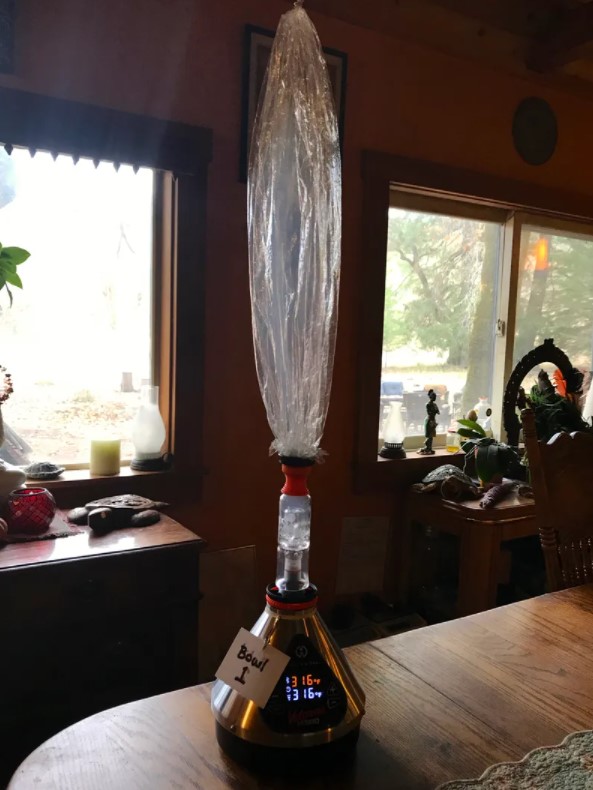 When I received the big box full of gadgets, bags, hoses, and accessories along with the heavy base of the Volcano, my non-tech skills were quite challenged.

Cleaning the Mighty was enough of a chore, but the Volcano, at first glance, seemed comparable to operating a spaceship. The new model, called the Hybrid, has a digital screen to keep you apprised of the temperatures, and it can even be controlled from your cell phone.

That was too much for me to handle, and I was confused about why I would even need to do that if I’m sitting right next to the device? But I did appreciate being able to change the temperatures easily, which allowed me to experiment with flavors and the intensity of consumption.

The new model also has a hose attachment that really shoots out a good full hit. I liked that a lot, too.

Setting up my first bag on the base proved to be very easy, so my fears did start to recede. I can be stubborn at times, so I needed to chill out and release my prior judgments.

Of course, to do that, I needed to get high! I ground up some Swami Select premium flowers with the grinder provided, a good strong metal one, and filled the bowl.

Aha! This definitely felt like more of a real hit than the Mighty and I got an instant head high. But what really got me at first was the delicious flavor of the terpenes being released via vapor instead of combustion.

I realized that when judging, I would experience very different flavors using the Volcano than Swami would smoking a joint, so we needed to figure that out.

Nevertheless, I think the Volcano offers the true flavor of each flower strain.

At this point, I also realized that I needed to train myself on the new machine — to sort of recalibrate my approach to smoking. There was so much to learn: what temperatures work best for me, how to care for the machine, and, perhaps most importantly, how to tune into the headspace of the high it inspires.

I wrote about this on our social media accounts, and received many suggestions and comments.

Most raved about the Volcano and the Mighty, and I began to realize how many people have similar issues as I do.

They too have discovered that vaping cannabis flower is the only way they can safely, comfortably consume cannabis. I was clearly not alone. I knew then that judging for The Emerald Cup via Volcano is a very viable and critical method.

Lots of tips were offered to me, such as best temperatures for what effect, as well as a few suggestions for how to clean the device.

One man suggested that I “change the bags out frequently. Residue, full of THC, builds up on the inside of those bags. If it builds up too much, you’ll really be tripping!” Obviously, my reply was, “Is that a bad thing?”

I have yet to change my first bag … 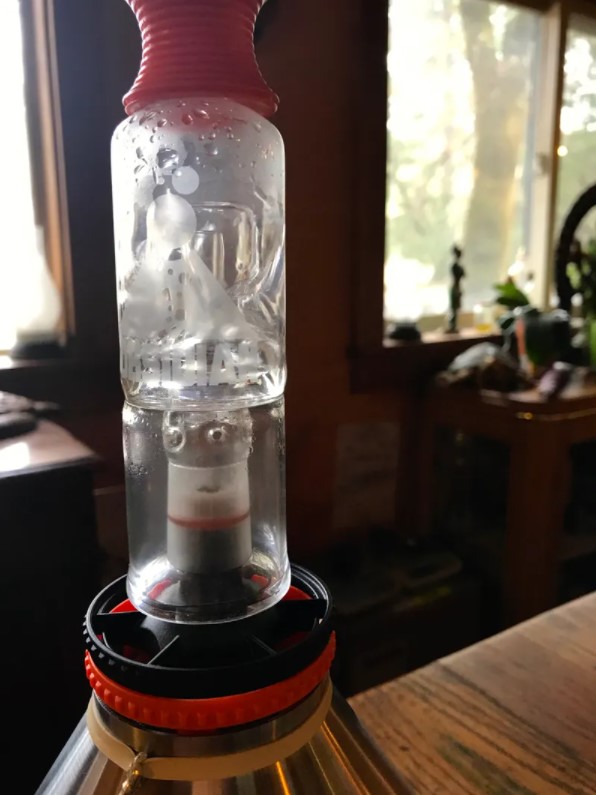 Another person suggested I look into the Magma’s Obsidian bubbler, an attachment for the Volcano, that turns it into a water pipe for extra cooling. On the site, it says it “reduces temperature and increases humidity” and so I had to try this, too. Even though she was new, I already wanted to dress up my Volcano and bring her gifts!

Oh, and I had already given her a name: Etna, after the Volcano in Italy.

I received the Obsidian from Magma right away.

It’s a beautiful, hand-blown glass attachment that goes on top of the Volcano bowl, then the regular bag is attached to it. The bubbler is easy to use and does considerably cool the smoke. When you use a second bag for one bowl, the hits are less harsh thanks to this widget.

I’m happy to say it doesn’t affect the yummy taste either. However, I did notice that the bag began getting wet inside. The company recommends drying it out for 90 minutes before putting the bag away.

Instead of that, I just did the last couple of bowls that night without the Obsidian and that dried out the bag. And at last, I was actually feeling high!

Over the past couple of weeks, Etna and I have been getting well acquainted.

I have even invented my own accoutrement for her. I kept forgetting how many times I had filled the bowl because the ground up flower doesn’t look very different from one bowl to the next. I was stoned and confused.

What’s a girl to do?

So I made a necklace for Etna with a little card dangling off of it. One side says “Bowl 1” and the other “Bowl 2”. As long as I can remember to flip it, I’m doing OK! I guess this means the Volcano is working her magic. 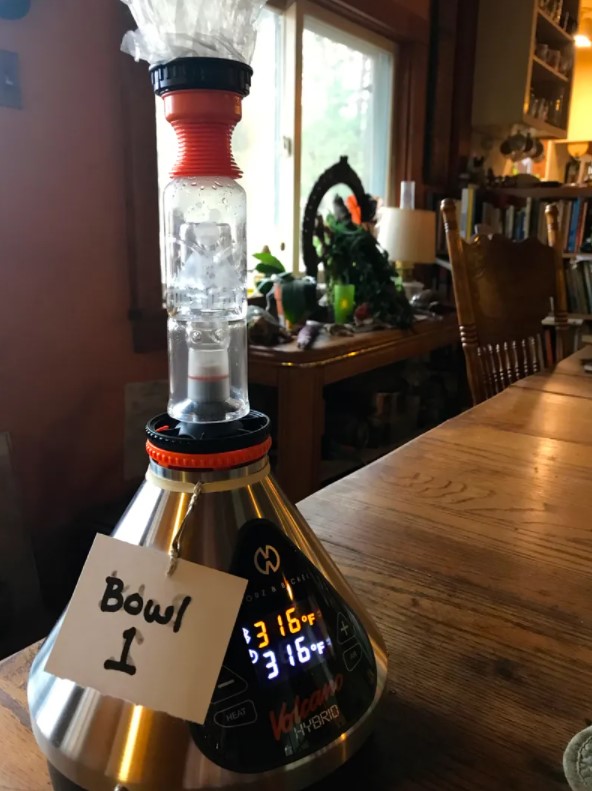 I find that any setting over 345 degrees is too harsh on my throat and so I like to hover around 315, which supposedly releases the Delta 9-tetrahydrocannabinol (aka THC) which offers euphoric, anti-inflammatory properties, and much more.

This is the setting I will use to judge all the Cup entries in the hopes it shows the unique quality of each flower strain when heated to the same temperature.

My body tends to get that initial head rush from the Volcano then a short high. It does not last as long as a joint high, but I find that when I keep on smoking bowls, it builds up over time.

Swami and I figure we can do the first steps of judging together (looks, smell, and dry-hit taste) and then see how similar our responses to the effects are from our two different consumption methods.

When we come across real contenders, Swami can try the flower using the Volcano, and I may even take a hit off a joint to make final decisions. A few hits shouldn’t hurt, right?

I have always looked at The Emerald Cup judging as a type of scientific experiment and we keep copious notes, so now we can add “flower vaping research” to the list.

Considering all the bad news about oil vaping lately, the time has come to share the news about flower vaping devices. If you are having respiratory issues, check out the available dry herb vaporizer brands and see what works for you.

You may even toss out those oil vapes forever.

This way, you can still know your farmer and learn where and how the herb was grown. Plus, you’ll feel perfectly safe while getting high, knowing that there are no unknown toxic substances mixed in with your herb.

Going with the flow can be a good thing. I’m learning that this year, and I gotta thank Etna for her help.