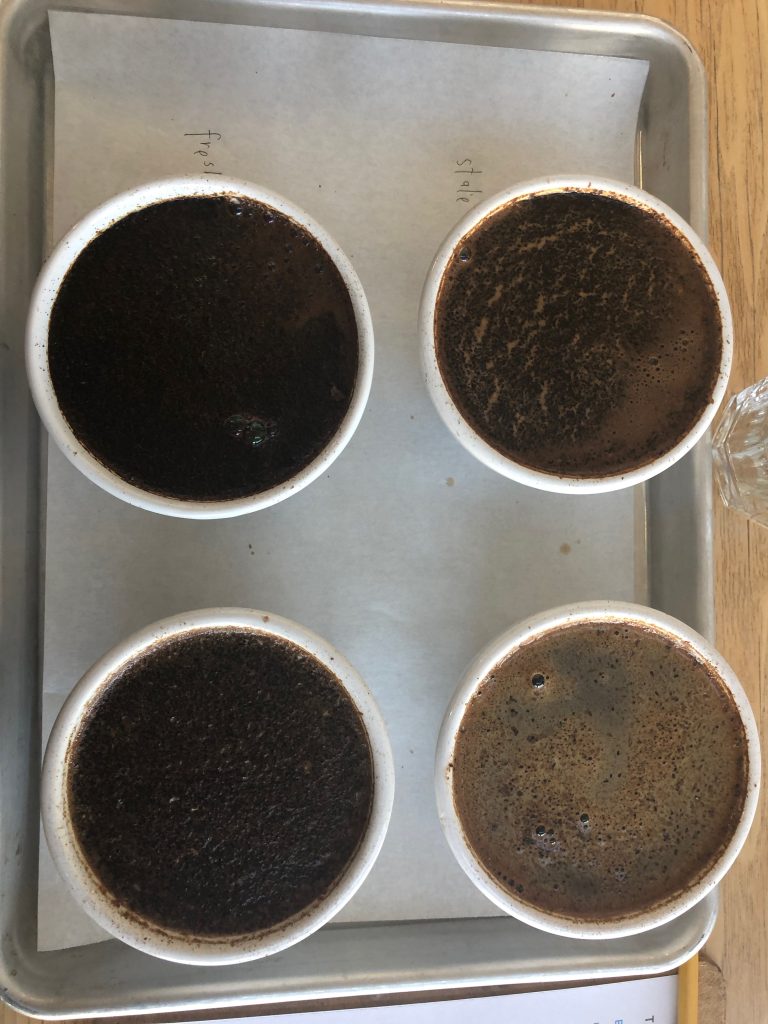 The other day I had what might be the ultimate coffee experience. I was invited to a coffee cupping event at the Blue Bottle Roastery in West Oakland near Jack London Square and the Produce Market. Now I take pride in the coffee I brew at the Ranch for me, the team and guests, but I am always ready to learn more, so I was looking forward to the morning tasting. 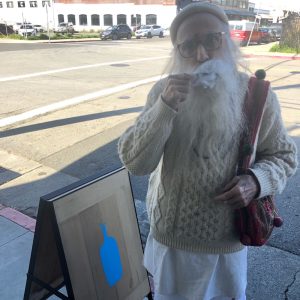 Prior to this invitation, I really didn’t know anything about Blue Bottle Coffee, but whomever I asked said they were really the best, especially their cold brew coffee.Then a couple of weeks ago, on my way to The Barbary Coast in San Francisco, I noticed the Blue Bottle Cafe behind the Old Mint was really packed so I knew something was up.

Sometime in the hazy past I had been to a cupping, so I kind of knew the procedure. One schlurps the coffee from a soup spoon in order to saturate the tongue and mouth with the dark liquid and then spits most of it out, so as not to get too wired

Cupping, it turns out is very much like a wine tasting or judging cannabis for the Emerald Cup. It engages the sensory faculties of sight, smell, touch and taste. Laid out on the stainless steel table in the Cupping Room, were about 15 pairs of cups each with a measured amount of ground coffee. They hailed from several different countries, ranging from light roast to dark. We could see samples of the beans and feel the grind.

Next, after the visual inspection, the nose is placed at the top of the cup and the fragrance inhaled, being careful not to snort the grounds. The subtle distinctions between levels of roasting and national origin were fascinating, as we circled around the table for a second time and third time.

They brewed the coffee with water at precisely 96 degrees Celsius or 204.8 degrees Fahrenheit. I knew it was supposed to be less than boiling, but that apparently is the exact temperature at sea level. This taught me that since our ranch is at 2600 feet, and water boils at a lower temperature at higher altitudes, I need to re-calibrate my brew technique. They let it steep for 12 minutes to make sure it was cool enough to spoon, yet the coffee in the cup was still hot.

Then, the schlurping began. Of course I had to take special care with my beard and mustache, ending up drinking quite a bit. Normally I like the darker roasts, but lately to accommodate a guest or a crew member, I have been drinking some light roast as well. So, I delighted to sample all the different flavors and gain an appreciation of the lighter roasts. Under the influence, the discussion grew lively and people discovered their favorites.

It was extra special to cup alongside Blue Bottle founder James Freeman, a man with a passion for crafting the highest quality product in a market saturated with innumerable competitors. He is kind of obsessed with “Freshness” in his coffee, forever striving to be sure the flavor in the brewed cup is as delicious as the smell of fresh coffee beans when the can is first popped opened. I felt an instant affinity with him for the care he takes with his coffee, which is like the care we take with our small batch cannabis

Since we were discussing fragrances and how aromas are such a part of experiencing coffee, I decided to share with people the fragrances of Swami Select cannabis flowers. When James opened the small jar of Deep Cherry, his “Oh, Wow!” was gratifying. He said it smelled like mint tea with some pine; someone else thought it was Maté or green tea.

When I pulled out a bud, he was surprised that it was cannabis. He told me that he grew up in Humboldt and his form of rebellion was to reject cannabis. He thought it smelled like skunk cabbage. I opened two other jars with Hindu and Swami Sherbet, and they were intrigued at the differences. I was hoping they would understand that Craft Cannabis is like Craft Coffee. 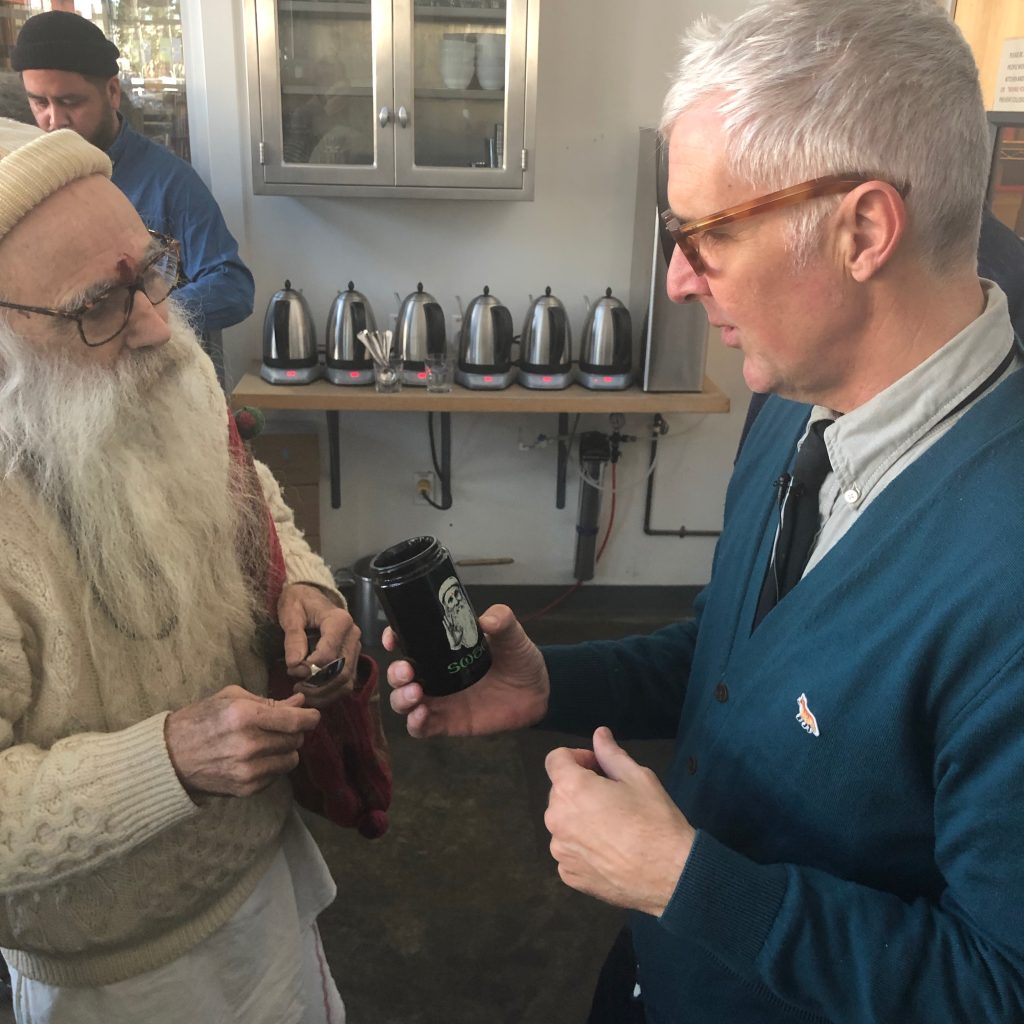 By this time I was so wired I ducked outside to burn a number, which I was told later was cause for comment. Apparently, they weren’t used to seeing people light up on the street after coffee. But that is what we always used to do back in the day in North Beach – the Italian section of San Francisco – after drinking a cappuccino at the Trieste or the old Malvinas. When I came back in they were taking a tour of the roasting plant, which also reminded me of the the classic Italian artisanal coffee roasters in North Beach, such as Graffeo. How well I recall the pungent aroma of the roasting beans which saturated the early morning air in the neighborhood.

My romance with coffee is just a few years longer than my romance with cannabis. I find caffeine and cannabis to be the perfect combination. Together they raise my consciousness and stimulate the thought processes. The small cannabis farmer who struggles to thrive in this new age has a lot to learn from Blue Bottle and their impressive growth from James Freeman roasting beans in his kitchen to becoming an international brand. Let me smoke a joint and sip some coffee and ponder that…