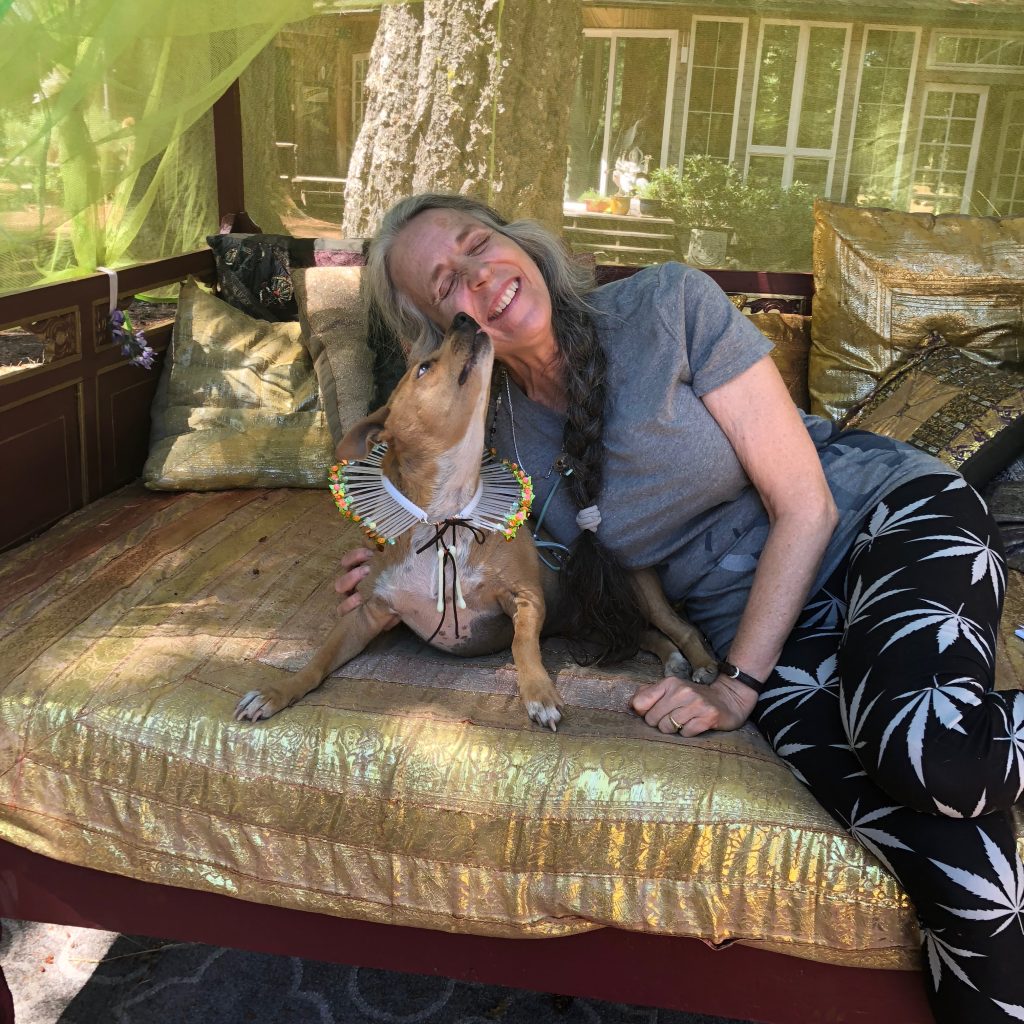 It started out as a tough summer for Tipu. Our beloved pup was scratching at his right ear all the time. Clearly, something was wrong. The first vet said it was nothing, that he really just needed to lose weight and sent him home with some diet food. We thought it was pretty cool because it is a brand called OM, for Overweight Management, but still a great name.

Tipu loved the new food and was visibly losing some ounces, but he kept going at that bothersome ear with his paw. The weight loss program was revitalizing dear Tipu quite a bit, so when his friend Dingo the Dog came to visit, Tipu was hot to trot. They ran and tumbled and at some point Dingo – who is considerably larger than Tipu – came down on a nerve on the right side of his face with a bit too much force and something 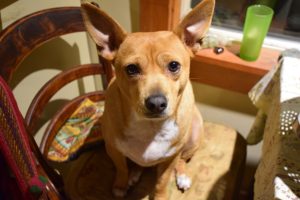 Tipu retreated from the game right away and had to lay down. Nothing was bleeding, so we kept a close watch on him over the next days. Poor pup, between his right ear itching and his face starting to droop, he was starting to look truly miserable. Back to the vet we all went.

It was a different doctor this time, and he was very concerned. First thing he did was look deeply into his ear and then, holding Tipu closely while he squirmed, he gently maneuvered a long stick in there and dug out a big ball of goop. Yuck. I don’t know how the first doctor had missed that a couple of weeks before. We gave Tipu antibiotics for the next ten days.

Next, the vet examined the nerve area which had been compromised and deducted that basically there was nothing we could do. “Wait and observe,” is all he could recommend. He suggested that the nerves “might possibly” regenerate. So we drove little Tipu the Wonder Dog home to the ranch, though, clearly, he wasn’t feeling so wonderful. He did stop scratching at his ear, which was good, but the entire side of his right face began to sink. It looked like he had suffered a stroke.

Everyday Tipu looked a little worse for wear. This four year old dog looked 14. His head tilted visibly to one side all the time and his right eye was way too leaky. The nerve damage was severe. We prayed everyday it would be better when we woke up, but it was getting worse.

About two weeks into observation, we had a gathering at our ranch with lots of good food and music. Even though Tipu had to lug his head around at that awkward sideways angle, it didn’t stop him from lurking around the food tables in search of a dropped crumb or tasty treat. He is a dog, after all. Well, he must have found some delicious cannabis edible lying around and of course he gobbled it up.

It must have been about nine o’clock, just as evening shadows were growing long, that I noticed Tipu really struggling to walk. Obviously concerned, I got him inside lying down between Swami and me on the couch. He was limp spaghetti, his legs sprawled out and his tongue literally lolling out the side of his mouth. It was difficult to decipher at first whether it was a further extreme deterioration of his nerves all of of a sudden … or was he just really stoned. After closely watching his every move, it was determined that Tipu was super high. 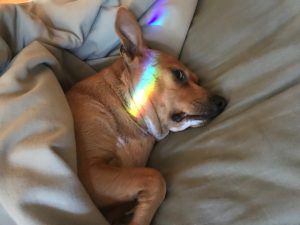 Around eleven o’clock we took him to bed and left him quietly snoozing in the dark silence under a cozy blanket. His breathing was natural and he appeared to be a very sleepy dog, but I couldn’t even imagine what he was seeing in his brain. Doggie psychedelia?

We have heard stories for many years about animals eating edibles and getting zonked out. Usually, it’s the tale of how the owner takes it to the vet who recognizes the symptoms and simply boards and monitors the animal’s vital signs until it snaps out of it. It is very easy to freak out if you see your baby pet absolutely drained of life.

I could hear his heavy breathing as I fell asleep a few hours later next to Tipu, and we dozed off together. Then, abruptly at just about five o’clock in the morning, Tipu sat straight up, looked around and yawned widely. Tipu was back in his body!

It was evident at breakfast that morning that his appetite was fully returned as he continued searching for any fallen niblets. As the day wore on, it almost seemed like Tipu was walking a little straighter. Over the next week, we watched in awe as Tipu’s vigor returned and his head began to rise again proudly. His entire gait and demeanor seemed to grow younger by the day.

Naturally, we did some research and discovered that indeed cannabis may well have direct regenerative powers for nerve disorders. Was Tipu’s edible accident really a blessing? Was it merely a coincidence? We may not have scientific evidence, but it certainly appears that the high dose of edible cannabis regenerated Tipu’s nerve in his face. It’s now been a few weeks and our beloved Tipu is fully recovered. Thank you once again, Ganja Ma. 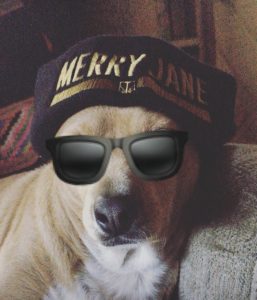