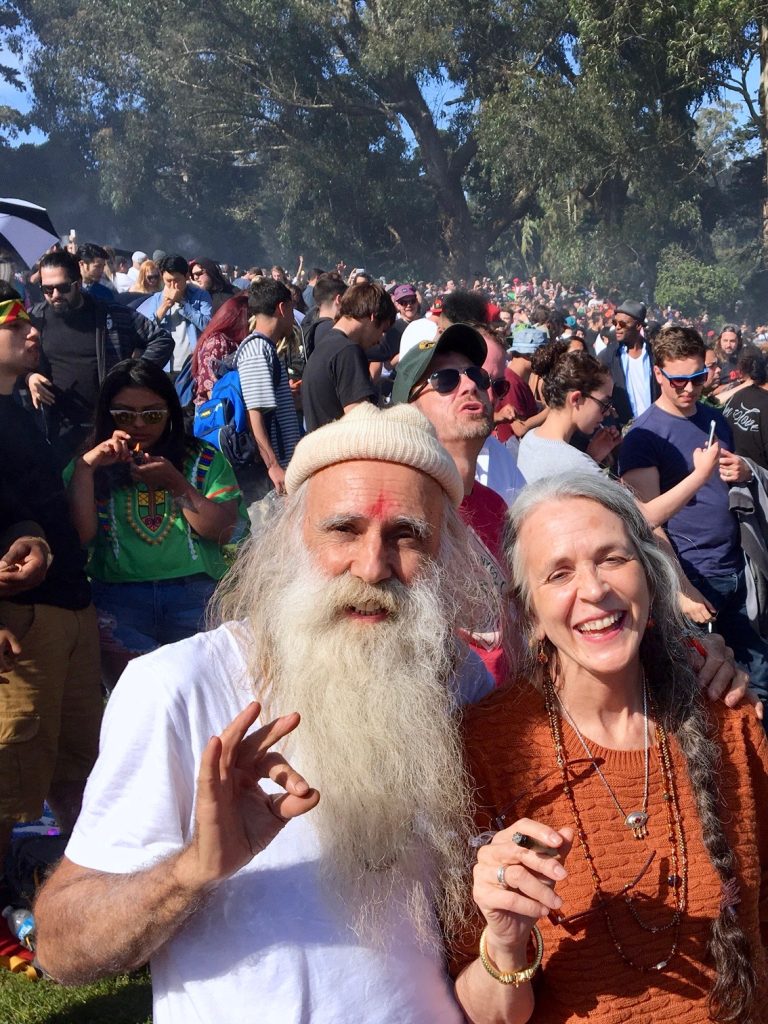 Every week there are encounters that seem to define our era, yet the contrasts are noteworthy. Tuesday morning was spent in the dentist’s chair and the afternoon was hardly less painful. This was the feeling at the Willits Senior Center during a workshop organized by the Mendocino Agriculture Commission.

There were presentations by the county and state agencies which are now in control of our future as cannabis growers. First, Cal Fire explained they would have to inspect our roads. We already did that when we applied for Class K building permits, but this was new information for most of the 150 people in the audience.

Then the Water Resource Board said everyone needed a statement of water rights. I had just been talking with them about the fact that after a year wait they finally granted us the use of our spring, with the caveat that the water cannot be used for a commercial crop. Say What? This is a spring that originates on our property and disappears into the ground without any water course “within the line of sight.” Normally this would be considered “non-jurisdictional”, but we registered it anyway.

I have no idea why they have decided not to allow spring water for Agriculture. I responsibly collect water in the winter when the spring is running overtime, as one is supposed to do, and use it all summer. After it is used in the house it goes to grey water, which is in turn used to water the plants around the house. After that, it seeps into the ground in the same watershed it was taken from, merely a few hundred yards distant from its source. When it is used in the garden, it also seeps into the same water shed. I fail to see how this Ag use is detrimental to the environment. Most of the water we use makes it back into the original watershed. Some of it I use twice! Our allotment is 4500 gallons per day, but our spring currently, after a very wet winter, only puts out 1500 gallons per day. In late August it goes down to 500 or fewer gallons per day.

The Water Resource Board agents did say that they are working on a special Small Cannabis Cultivator water use permit. Apparently there is a similar category for small wineries and vineyards. He also suggested I get an Ag Water permit for the use of stream and pond water. The problem is that those permits can take years to process and a water rights document is required right now by the state and county to obtain a cultivation permit.

Next up was the State Water Quality Board. This is a new agency created solely to inspect cannabis farms and their water discharge. This includes runoff from roads and irrigation, pesticide and fertilizer use and storage, septic systems, grey water, gasoline and diesel storage. In other words, anything that could end up in the streams and creeks. They charge a fee of $2500 for cultivation areas larger than 10,000 square feet, which means most growers. This was news for most people. By and large, this is a good thing if it stops some of the environmental damage that is still going on. But the fee seems very high.

Then a new member of the Ag Commission read out the requirements for obtaining a cultivation permit. He got a laugh when he said one way to prove prior cultivation was to show proof of being busted. Later I was told that he is into Living Soil and is supposedly “One of Us”. I hope so, because we are going to need flexibility and lenience from the government agents who will hopefully give us time to come into compliance.

The Planning and Building Department made a brief presentation, saying that to qualify for a waiver of penalty fees, farmers needed to apply for Permits prior to June 30, 2017, but they were thinking of extending that deadline. The elephant in the room was the need for fully permitted buildings if one has employees. Virtually all farmers in the mountains have built everything without permits and most will go for Class K permits which are designed specifically for alternative building methods and materials. However, theses buildings cannot be rented or used for employee work spaces. How are families going to continue to operate if they can’t use their buildings and if they can’t have their children under 21 helping them? Will we need to build fully permitted buildings, including ADA required bathrooms?

The final painful realization was thanks to Sheriff Randy Johnson, who first of all said with a sadistic giggle: “Welcome to the world of Regulation.” He then reminded everyone that any violation of the Mendocino Cannabis code was considered a “Nuisance” and would be acted upon by the Sheriff’s Department.

It was painfully obvious to everyone that our very survival as a way of life is in clear and present danger of being wiped out by fees, permits, inspection, taxes, road repair, new buildings, workmen’s comp, insurance, payroll taxes, unionized workers, etc. That is to say, everything that every other business operating in California must put up with. What it means, however, is that very few of the people who are small and tiny growers will be able to make the transition to the new regulated commercial market. Almost every one will have to go into debt or bring in investors to get enough working capital to meet all the new requirements. The other constant  fear is that the price per pound could drop even lower.

In stark contrast to the sense of doom among the growers (for whom bad news and government persecution are nothing new), the mood at Hippie Hill in Golden Gate Park on 4/20 was exuberant, with a sense of victory, of having won the right to get stoned in public. Nikki and I had both spent many an afternoon there back in true Hippie Daze, but this was a new scene.

After lucking out on a parking place on 3rd just off Fulton, we made our way through the woods in the Park while we smoked a joint, just like we used to do in the old days, and came out right behind the Hall of Flowers (aka the Crystal Palace). Hundreds of people were streaming toward the entrance, where they were checking backpacks for glass bottles. The crowd got denser as we moved through the meadow and up to find a spot on the Hill. A little square of green grass beckoned, so Nikki put down a cloth and we sat with the crowd. Soon we were passing out joints and meeting our neighbors. Two people told their stories that they had left their home states and came to California in order to get cannabis for health reasons. Their respective doctors had them on nine different pills and their life was miserable. Cannabis had saved their lives. It is a story we hear over and over again.

Sitting next to me was a clean cut young man, who couldn’t have been over 20, who asked me if I had ever been here before. I assumed he meant the 4/20 celebration (it was his second). I said, “Yeah, but it was exactly 50 years ago, well actually in July, 1967.” His eyes popped wide open at that point. So I offered him a hit on some “Pure, Sungrown Mendo Cannabis.” This was kind of a new combination of words so I had to explain a bit about High Grade Outdoor Weed. 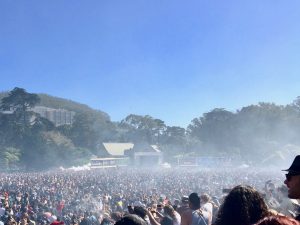 By this time the count down to 4:20 pm had begun and everyone got ready to light their special joint. This was gonna be our third number since we parked the car, but hey, 50 years of smoking doesn’t come around that often. Within seconds the entire area was covered in a layer of white smoke. Fifteen Thousand people sparking together, to say nothing of the innumerable other 4/20 celebrations all over California: AWESOME! The mood was joyous but also restrained. Looking over the huge crowd was a vision of the future. One could see every color or race or nationality or persuasion. Every possible mixture and cross fertilization of people and culture were all smoking together, all agreeing that “Cannabis is good for you”. People were proud to strut their stuff. But everyone also was aware that we are all at risk with the current administration in power. I’m sure very few had any idea of the existential threat faced by the very people who supply this medicine of bliss. The City World rarely knows of the trials and tribulations of their County Cousins.

The third encounter of a different kind came on Friday evening outside Ukiah in Redwood Valley at Yokayo Ranch and Resort. The Mendocino Appellation Project and the Emerald Exchange hosted a gathering of connoisseurs and vendors, to present their plan and map designating 11 different zones of cannabis cultivation in Mendocino County. They are asking for help gathering the data on soil, wind, water, rainfall, temperature, as well as feeding regimens and strain yield correlated with cultivation zone. The point of this is to establish a true “terroir” for each area, noting their climate and culture difference, so it is not just a geographical identification.

All this is part of a small farmer survival strategy: highlighting the special and unique features of our County, which are the reasons that the best cannabis in the world comes from Mendocino.
It was a convivial gathering with delicious food, cooked by MAP Co-Founder Justin Calvino’s mother. But again there was an underlying concern: “How are we going to survive all this Government oversight? What will it cost? Will the going price for cannabis drop even lower and put us all out of business?

At the Yokayo Ranch the emphasis was on the marketing and branding of Mendocino and of the farms and manufacturers who grow and produce the finest flowers, salves, ointments, extracts, concentrates, and edibles. The County is truly the heart and soul of the cannabis community. Many of the innovative medicinal preparations and methods of extraction were discovered, created, perfected by individuals and families working in backwood kitchens and garage testing labs. Indeed, the edibles, tincture and ointment makers were some of the first to label and brand their products. Now more and more cultivators realize the urgent need to tell your story and craft a mission statement to put a face on your farm and say what is unique about your product or process.

So that in a nutshell is the mood in this corner of the Cannabis World. To survive in this challenging new world of Regulated Cannabis the small artisanal craft cannabis cultivators are going to need the active support of the consumers. Growing pure, potent medicine in Living Soil takes time and effort and love. Remember: 4:20 happens twice day, so stop and medicate!