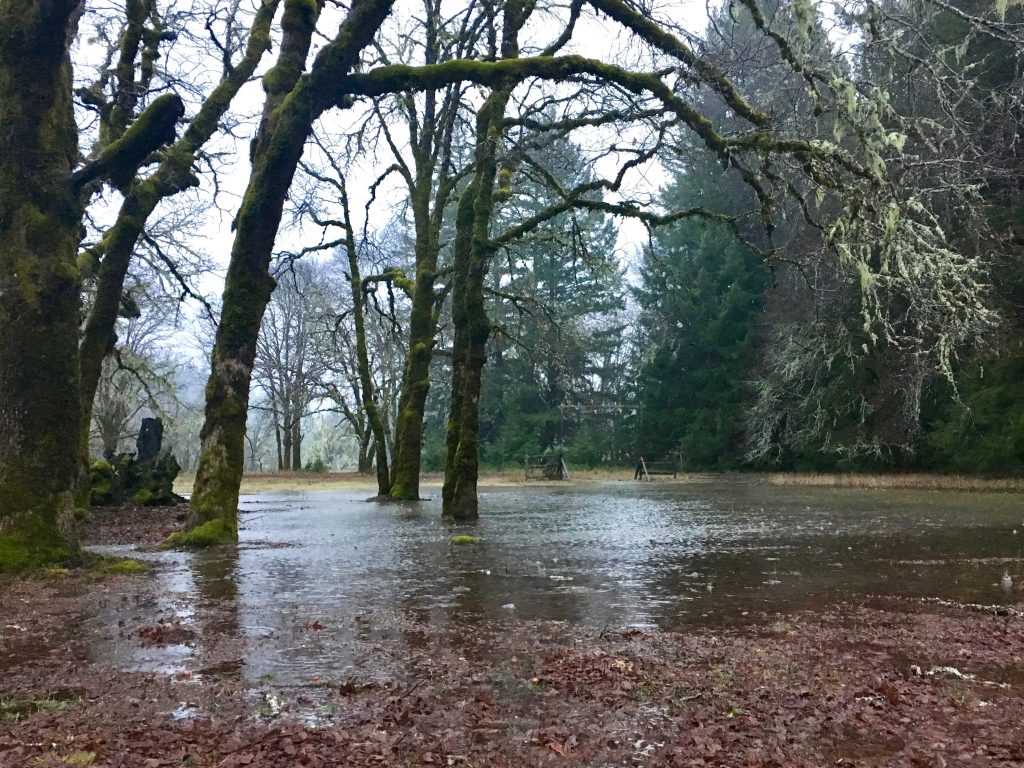 It seems like the rain will never stop, even though Saturday and Sunday were sunny. I got out the Farmer’s Almanac to see what weather is in store for the spring. To get a handle on the reliability of this year’s predictions, I first read over the prognostications for the Fall and Winter.

Not surprisingly, they were spot on in listing the frequency of the rainy periods and the above average precipitation totals, as well as the temperature being also above average, that is warmer. The Almanac predicted two sunny days in November, two in December, one in January, which as I recall was basically true, none really in February. Curiously, as mentioned above, the two sunniest days in three and a half months were yesterday and today, the 11th and 12th of February.

While the Almanac said that Winter would be rainier than normal, it did not predict the enormous amounts of rain we have had here in Mendocino – the repeated “atmospheric rivers” mentioned on the weather reports. So far this “Rain Year”, the total for Laytonville town is close to 70 inches. This would be above average for the whole year (which starts in September), and we are still in February.

In the Almanac, Mendocino is the very bottom or Southern edge of Region 15, Pacific Northwest. But the County is also very near the northern border of Region 16, Pacific Southwest, so I often read both sets of forecasts. But this year the Northwest forecast is the more accurate, although the North end of the South west Region (which would be Sonoma County, perhaps up Ukiah) also had above normal rain predicted. (ed note: Nikki finds this whole paragraph hilarious)

As farmers here in the mountains of the Emerald Triangle we have learned to read carefully the National Oceanographic and Atmospheric Agency weather reports and to take them seriously. If it says there is going to be a “hazardous weather outlook” such as a heavy snowfall, we run out to the store (the nearest one is 40 minutes away) and stock up on food, coffee and gasoline for the generator, since we’ll need back-up if there is no sun for a few days.

So seeing the accuracy of the already lived forecast, I went on to read the notes on March, April, May and June. It seems like we are in for more rain, maybe a lot. March will be above average and the other months slightly below average precipitation. Even June and July have forecast rainy days, while August and September look to above average rain, when usually there is none from June until late September. Even the October forecast has only five days of sun.

This surely means the end of the drought for Northern California; the reservoirs are full and the Sierras are covered in snow. For the grower, the ground is so saturated the it’s not really good to be in the garden, so as not to compact the soil. Nonetheless, it’s time to start getting things ready. We put up the hoop house and are selecting the seeds for this year’s crop. They will sit in front of the Goddess Ganja Ma for a lunar cycle to be charged up before sprouting. The seeds will be buried in tiny blocks of soil this year, instead of sprouting them on brown paper towels or coffee filters. The sprouting day is 26 February on the new moon in Pisces. The new moon stimulates new growth, while Pisces is a water sign and therefore a “fertile or fecund” sign. As each seed is put in the soil, a mantra is recited and it is given a drop of holy water from the sacred Ganges River.

Meanwhile, I am finishing up the worm bin, and we’ll be gathering humus from the forest duff, oak leaves and moss that has fallen off the trees in the storm. These will be part of the sprouting mixture along with a little charcoal, compost, comfrey, worm castings, micro-organisms, which include bacteria and fungi. Potatoes will be planted around the tiny hillocks in the Sri Yantra pattern where the cannabis will be eventually transplanted. Later, clover will be planted around the hillocks and quinoa, oats and stinging nettle will be planted in the field next to the cannabis. These are for mulching, composting and making plant fermentations and compost teas. We’ll make some bokashi to mix in the compost pile to accelerate the process. With all this rain it is a good idea to cover the compost pile so that it doesn’t get saturated, but don’t let it really dry out either.

The rain is really welcome, of course, but too much isn’t always a good thing. I will have to work on the roads through the forest to repair the rain damage, and cut out a tree or two that have fallen across the road. Down by the swimming hole, a whole chunk of the steep path has been totally washed away.

Still, all this means that the soil is so wet that we will need less water for this year’s crop. We’ll see what this means in terms of yield and potency after harvest. Right now is like Spring Training: Pitchers and Catchers Report. Everyone is optimistic about the coming year and how great the crop will be. “This year we’ll make it to the playoffs”; “We’re gonna win the World Series.” “This is our year!”

First and foremost, purity and potency are the watch words. Living Soil is the way.