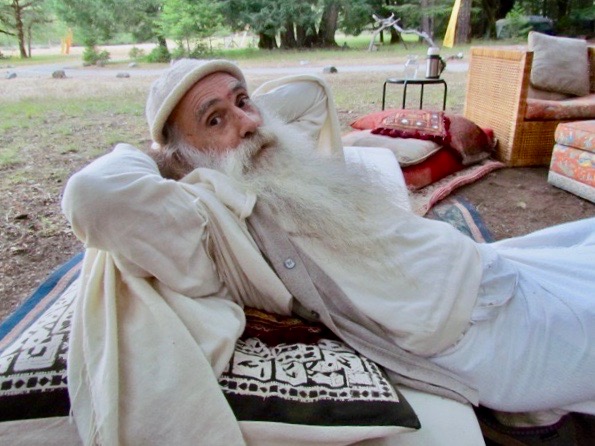 It happens quite often: Swami Chaitanya and I will be walking down the street somewhere when someone comes up to him, and in very carefully enunciated English will introduce themselves and ask who he is. This is when I casually step back to watch the expression on their face change from devotion to astonishment. I can practically hear inside their brain as they think, “Wait a minute, this Indian holy man has an New Jersey accent!” 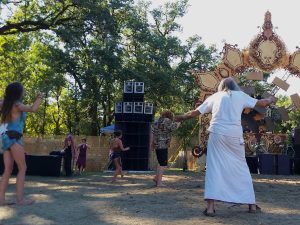 That’s right. Swami is full of surprises. His ancestors came from Northern Europe in the 1660’s to settle in Elizabethtown, New Jersey. It was 300 years later, in 1967, when Swami moved west for the Summer of Love in San Francisco. I have called his style “radical classical” for years. Even back before he was “Swami,” when he wore blue jeans, beads and button down shirts, people could never quite figure him out. Is this guy a hippie with a traditional preppy education? Yes. How can one person be both a modern artist (he was a painter and photographer for many years) and do heavy construction? Did I really just hear him in the same sentence compare Greek philosophy to Baseball?

That’s one of the many things I love about Swami. He’s all over the map! I bet you didn’t guess that he speaks fluent German and Spanish. His Hindi is passable, but his “Hinglish” is much better. And don’t get him started on British history – which King did what to which Queen – unless you have time to kill. For that matter, same goes for which Maharaja ruled when and what Sultan valiantly fought the British (Hint: Tipu Sultan, our dog is named after him). Swami’s brain is like the ocean – you never know what will wash up with the next wave.

It was 1998 when Swami became Swami, at the huge Kumbha Mela Festival in Haridwar, India. He took off his jeans and took a vow to wear only one color (it was orange at first and changed to creamy white later). He took several other more serious vows at the same time, and gave up his old name and identity to become Swami Chaitanya Bramacharya Vishwakarna. But Swami the Student/Hippie/Artist/Farmer still exists under his robes and in his heart. I guess you could call him a “Swami of all trades.”

In 2003, when I was visiting Swami in India (I had moved back to my hometown of San Francisco a few years earlier), we spent a lovely day with our spiritual teacher, Swami Chidananda, in his small village. He asked me what my goals were in life and I expressed my desire to create a spiritual sanctuary somewhere in California. He looked at me and said, “But how will you do that alone? Who will help you?” Chidananda turned then to Swami Chaitanya and simply said, “You can build anything. You go and help her.” That was the “GO” card from our teacher, he was released from living in India, to return to America and discover his true duty. Teaching the world about Spirit and Cannabis. A perfect match. 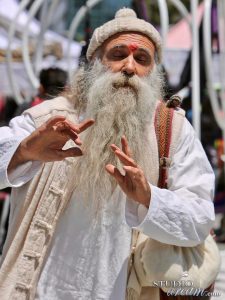 Even though it may seem that all he can talk about is Cannabis and Spirituality, there is so much more going on behind his big and bushy beard. Swami can give discourses on subjects ranging from Harry Potter to James Joyce. From Advanced Algebra to how to build a timber frame barn. From how to make the perfect cup of coffee, to how to create compost toilets. He loves to dance to psychedelic trance music yet can also easily spend all day engrossed in a good book. And he does not shy from taking truck loads of trash to the dump or fixing the plumbing in a rainstorm. I sometimes call him Swami Fix-it-ananda.

Some of the vows Swami took involved what he should eliminate from his diet to enable better meditation and peace of mind. Hence, no alcohol, meat, onion or garlic, for example. He’s a very happy Swami when breakfast and supper consist of granola, berries and oat and rice milks. He’ll eat some veggies and rice in the middle of the day, preferably enjoyed while reading a New Yorker or The San Francisco Chronicle. 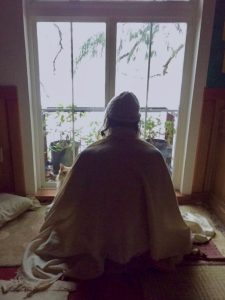 Swami sits in daily meditation every morning and before going to sleep at night, when he communes with our family Hindu goddess, Sri Mukambika. And of course his many hours in the garden are really a meditation, a joining together of the elements of earth, water, air and cannabis plant, combined with his human touch. Not to mention when he wails on his clarinet or deeply chants ‘OM”. Such is the life of Swami Chaitanya, a most surprising man. ?