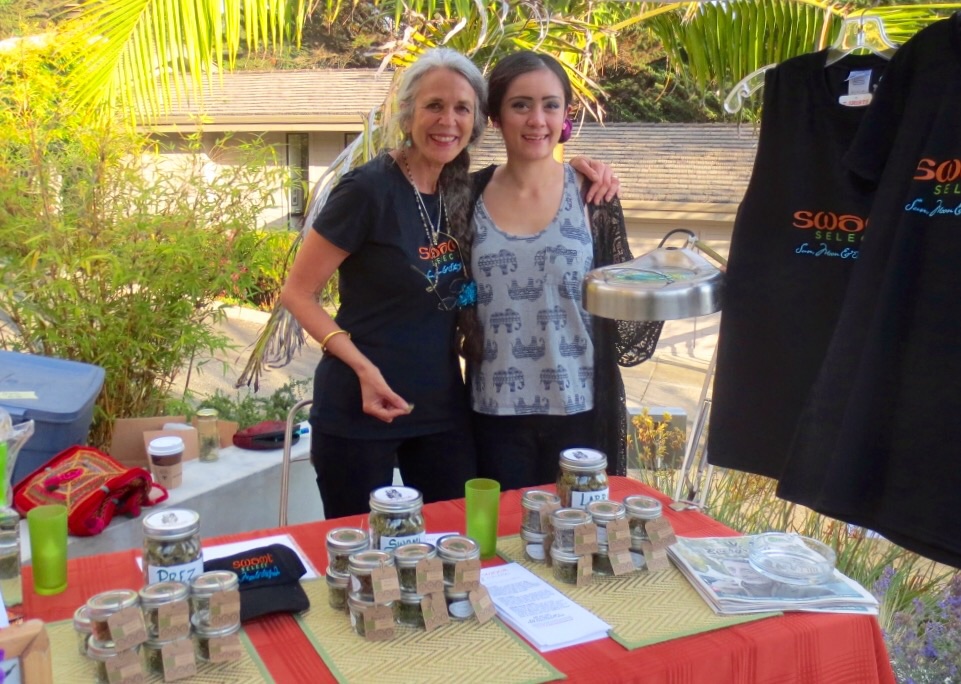 In celebration of the recent launch of FlowKana delivery service in the East Bay, we co-hosted the last Swami Select Salon of the season across the Bay Bridge in the hillside town of Piedmont. Once again we celebrated sungrown organic cannabis together with wonderfully diverse and enthusiastic guests who enjoyed several strains offered by HappyDay Farms (Amber Cline & Casey O’Neill) and our own Swami Select specials.

The home this time was a Modern Era architectural gem built in 1963, precise in every detail, down to the astro turf. And good thing it wasn’t real grass or it would have turned to mud from the surprising but brief rain showers. Yes, rain, in August, in a draught! Dense steel grey clouds edged in a brilliant rosy/golden glow gathered directly over us at sunset, casting everyone in the luminescent light. The crowd had gathered in the garden around both farm tables and were happily sampling when, wait, was that a raindrop? It took a few minutes to realize it really was rain that was falling, and even then, since the temperature was warm, many smokers stayed outside anyway. It was the Bay Area Tropics that night, and for all we know, it only happened over our joyous convocation. What a blessing!

But that wasn’t the only magic of the evening. Most guests drifted inside when the showers came, to enjoy hors d’oeuvres and drinks, plus delicious cold-pressed vegetable and fruit smoothie hits from Happy Moose that contained fresh ganja leaves from HappyDay and Swami Select Farms. Then, like a rabbit out of hat, a magician appeared: guest Barry Brilliant offered to entertain everyone during the rain, and so a lot of very “inspired” people were flabbergasted to watch his professional magic show featuring simply one piece of rope that left us all mystified. What perfect timing!

Then the clouds parted and the sampling eagerly resumed under the stars. When the time came for me to say a few words, I took the opportunity to explain the life of a cannabis farmer, and why that would be the last Salon of the 2015 Season – to be continued in January 2016. But this year, along with the same climate change that brought tropical rain to Piedmont in August, everything growing from tomatoes to acorns to cannabis is coming in early. We expect the very first of our girls to be ready by mid-September — two full weeks earlier than last year.

Hence, the Salons will go on hold for a few months while we harvest and prepare for curing our new crop of cannabis, which we look forward to sharing with you in the new year. We’ll also be very busy from November 1st until December 13th performing our duties as Judges in The Emerald Cup, to be held at the Santa Rosa County Fairgrounds December 12-13. Not only will Swami and I again have the honor to give away the Top 20 awards to Flower Entries, but we will have a Swami Select booth in the 215 AREA, so be sure to come visit and share a taste.

Just a few weeks of warm summer remain, but with the warmth comes the threat of fires and water worries. They tell us El Niño will come this year, hopefully not too early or it soaks the buds and can cause mold – so we pray for rain, but at the right moment! Who would have thought that rain at a Salon in August would be the right moment, but it was. As we all know, there’s no point in messing with Mother Nature – she runs the show.