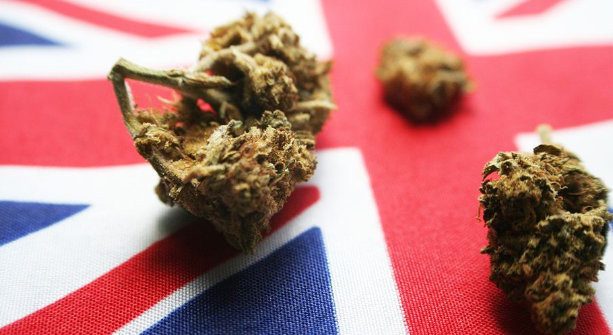 Our cultivation columnists traveled across the Atlantic for the Product Earth Expo. “It was a wonderful blend of Wild West meets Cultured Britain and beyond,” write Nikki and Swami.

All photos courtesy of Swami Select

This piece was originally published on MERRY JANE on September 5th, 2019.

No doubt it has been there for centuries, including as an ingredient included in countless medicinal remedies concocted by witches, occultists, and herbalists. More recently, since the start of the hippie counterculture in the early ‘60s, it has been present in the form of hashish imported from Northern Africa, the Middle East, India, and Nepal. European “freaks” are known to mix their hashish and cannabis with tobacco into spliffs, or “blunts” which are wrapped in a tobacco leaf. Now with legality entering the picture via the medicinal route, England’s traditional underground growers and sellers are trying to figure out how they will fit in. Now, CBD and hemp are the words of the day.

Hence, the Product Earth Expo was created as a way to start sharing the knowledge about cannabis. Specifically, the event aims to “highlight the complete business ecosystem of this amazing plant, its many varieties, derivatives, and uses,” through the lens of hemp and CBD. This was the fourth edition of the event, which attracted about 3,000 visitors over the unusually warm August weekend. The festival had to shift venues a few times for various reasons, highlighting the controversial nature of cannabis across the Atlantic.

“We finally found a place in the heart of the country, yet not in anyone’s face,” said James Walton, producer of Product Earth, describing the National Agricultural Exhibition Centre in the Midlands’ Warwickshire district, where the event was held. “It’s been difficult to find a suitable venue which would accept an event that had anything to do with cannabis, even the non-psychoactive varieties,” James explained.

Formerly home to animal and farming exhibitions, NAEC as it is known, lay fallow for several years. No longer did the Queen come to stay in her quarters there to attend national horse and livestock shows. The many exhibition halls were becoming run down after being empty for so long, and the neighbors had grown used to the quiet.

“That music is disturbing our regular Saturday evening classical music concert in our conservatory,” complained a neighbor to the local constabulary, who passed it on to James Walton. Turns out the local was hearing dance tunes from an Indian wedding down the lane instead, but the neighbor chose to grumble about the cannabis event. The stigma remains strong in the United Kingdom.

Yet, we believe the guests and vendors at the Expo were the most orderly crowd ever there. Several times throughout the three-day event, people commented on how messy it would be if it were a typical gathering with lots of alcohol, fights, and rowdy chaps. Cannabis was in the air and everyone was very mellow.

One British friend, Marshall, who used to live in California and had become accustomed to our way of casually embracing just about everybody, said he’d had more hugs over the weekend than in years in England. “This is great! I can feel the love here!” he exclaimed. Cannabis does have a way of opening the heart — one of her many charms. Or, as the great bard William Shakespeare, who hailed from a town very near to the event, once wrote, “One touch of nature makes the whole world kin.”

Friends from The Emerald Cup at the Product Earth Expo

In a noble effort to bring about that global kinship, Product Earth invited the Emerald Cup clan from Northern California to co-produce the event this year. That’s how Swami and I made it there, invited along with about 10 others to represent the spirit of The Emerald Triangle. It was a wonderful blend of Wild West meets Cultured Britain and beyond, as many European companies and visitors were present.

Our group of crazy colonials included hashish artisan Frenchy Cannoli, Maya Elisabeth of Om Edibles and Maya & Whoopi, Taylor Blake, co-producer of The Emerald Cup, Dan Herer, Director of the Jack Herer Foundation, as well as master of regenerative farming and founder of Bio-Vortex, Jesse Dodd. Along with others, we spoke on several panels on topics ranging from marketing and starting a cannabis business, to farming techniques and the importance of appellations/terroir. A large and laid back Emerald Cup lounge was a highlight, and it lent an exotic flavor to the show.

A few US-based companies also had their own booths, including a dynamic team from Emerald Harvest that featured their hearty bio-mineral nutrients from Northern California (which have already been available in the UK and Spain for over a year). Dragonfly Earth Medicine’s amazing regenerative nutrients are also available abroad now, and their booth was busy with curious customers. The process of growing pure cannabis with organic regenerative methods is spreading across the globe, and not a moment too soon.

Nikki, speaking on a panel at Product Earth

Three large exhibition halls were used. The Hydro Zone featured hydroponic growing equipment and nutrients mostly geared towards the home grower. The Head Zone was buzzing with about 130 booths dedicated to CBD and ancillary products, ranging from bongs to T-shirts and rolling papers. Several seed banks were on hand selling their genetics, which surprisingly are not illegal to sell in hydro stores or in head shops as “souvenirs.”

The many uses of hemp were displayed in the Hemp Zone in the main hall,  including an area where visitors could learn how to make hempcrete and paper out of the plant. A few large trim machines were on view, as well as some fancy stainless steel extraction apparatus, but nothing like the giant machinery shown in major cannabis conventions in the US, Spain, or Israel. In the UK, cannabis is still in a grey area for anything other than medicine, CBD, and hemp.

The third large hall was dedicated to the Glass Blowing Flame-Off competition, where people watched in awe as several top artists created incredibly intricate pieces on site. Some of the glass took all three days of the event to get just right. Many other glass art pieces were on display in cases, too.

Between the three halls was an open courtyard, where visitors gathered to smoke, eat, and hear reggae throughout the day.

Chad North, Chief Brand Officer for The Emerald Cup, compared the Product Earth Expo to 2013, “the first year The Emerald Cup was in Santa Rosa, and we felt like we had landed in a safe place.” Clearly though, the main difference was that smoking was not allowed indoors at Product Earth and only CBD and hemp products were on display. Considering THC was not featured (it remains illegal in the UK), we must report that there was an unbelievable “placebo effect” from joints being passed around in the courtyard. Again, we refer to Shakespeare who said, “Love is a smoke made with the fume of sighs.” Indeed, a whole lot of tasty sighs were being enjoyed. There certainly was THC being ingested in numerous ways at the show, as evidenced by all the smiles and giggles and hugging!

Gavin Sathianathan of London, an advocate for patients’ rights, has been involved with Product Earth Expo for two years. He’s also been a successful pioneer in cannabis businesses for even longer. Gavin declared that “the black market currently brings in about $10 billion annually in the UK. The only way to legalization is to deflate the Albanian dealers, the Vietnamese growers, and all the other gangs, and not charge high taxes.” In other words, decriminalize, legalize, and regulate!

But until legalization happens, a clever roundabout has been established by The United Kingdom Social Clubs. We spoke with Chairman Greg De Hoedt, who explained that there are about 70 chapters presently scattered across the UK. He described them as similar to speakeasies, except guests bring their own weed. “The government doesn’t really allow them, but they seem to look the other way. If one is reported, they simply move the location.” He estimates there are about 50,000 members nationally, with an average age of 45. The oldest member, he told us, is 84.

Members must be over 18 to join the clubs, and may be charged an annual membership fee equal to $12-$60 to cover overhead, as all clubs are run on a non-profit basis. They make it very clear that they are “not here to hook people up with a local dealer, but rather to connect them with a safe local community.” Their primary goal is to “create safe settings for cannabis consumers to socialize,” as well as to possibly form their own collectives of shared gardens for personal use. As Greg reminded us, “sharing is caring.”

Many members, like Greg, have had serious health issues, which brought them to cannabis. Others are more interested in the community of like-minded friends they discover through the clubs. “It’s just not happening in the pubs like this,” chuckled Greg. Plus, members find ways through the clubs’ growing collectives to purchase cannabis (THC and CBD, all indoor grown) at a fair price that they can afford, unlike the rare medical prescriptions available in England. Medical prescriptions generally take 8 weeks to be filled and cost 700 pounds per ounce (approximately $850), plus the 250 pounds ($304) required for a doctor’s appointment. Ouch. By contrast, the black market price for an ounce in the UK is about 180 pounds ($219).

We also spoke with Barri Gater at his True Canna Genetics booth. He originally fled England for Amsterdam several years ago, but the laws there have become quite strict. If busted, you can lose your house and everything else. As a result, many farmers moved to Spain and also started Cannabis Social Clubs, but with more liberal twists. “There are 1,000 of them now across the country and each has a unique niche,” he said of Spain’s club scene. “Some are based on video games like the Nerd Hotspot, or there is Scott’s Cereal Bar, which offers many kinds of sugary cereals for the munchies. There is Trestle, which is full of art treasures, and 23 with pounding techno. Other clubs may play jazz or rock, though.”

The main differences between British and Spanish Cannabis Social Clubs is that in Spain they are considered “private,” which means the law cannot touch them (more or less). The same goes for growing. “A man’s home is his castle, you can grow anything. The only problem is you can’t take it outside,” explained Barri. Likewise, a member can purchase cannabis sold by other club members, but they are supposed to consume it all on site and not carry it away. A proposal is under way to create a way to register with local police when carrying cannabis. But for now, it seems to be working well. Barri compared the Cannabis Social Clubs of Spain and England to “the new football clubs.”

The three days of Product Earth passed quickly, and then it was time to return to The Emerald Triangle. Product Earth had been such a mellow gathering; even Saturday night’s dance fest — featuring Morcheeba on the large outside lawn area — was full of sweet, gentle stoners enjoying the music. And more hugging.

At the end of the weekend, James Walton said only two issues occured: a bad wasp sting, and someone ate a strong edible. Not bad for 3,000 high people. In fact, quite civilized! It will be interesting to watch the progression of cannabis in the United Kingdom, as we all wonder how the laws will develop, especially around THC. “To be or not to be? That is the question?” Shakespeare always has the last word.