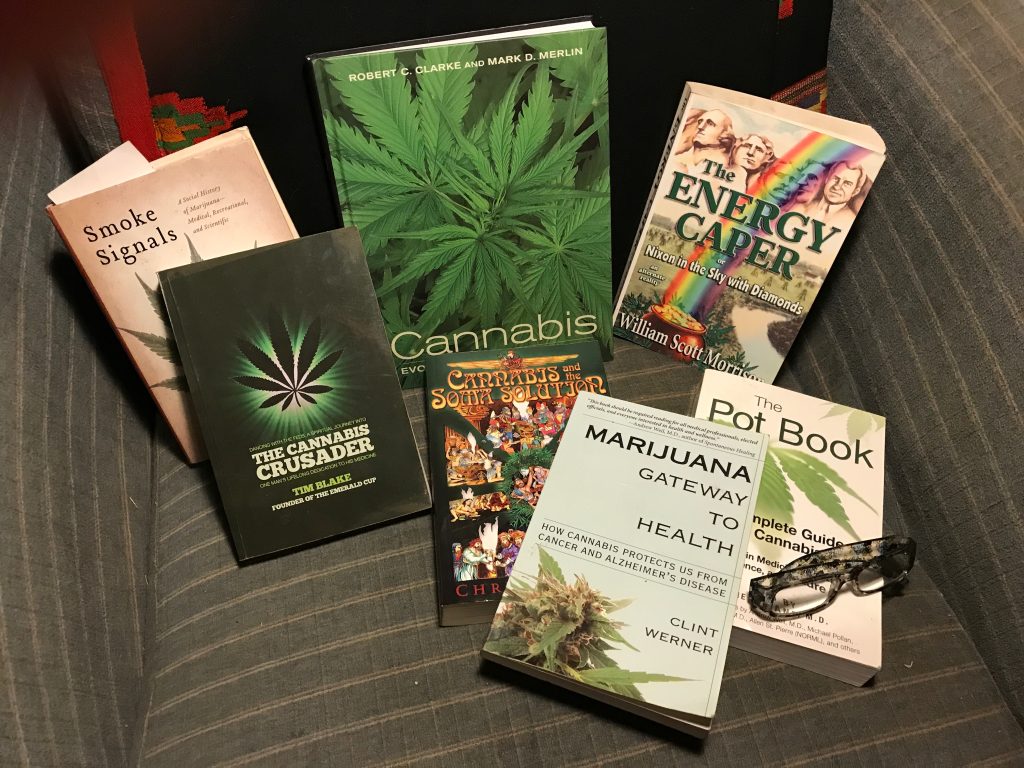 In honor of National Book Day, here are a few titles relating to Cannabis that I recommend.

First off, for some light harvest reading: The Energy Caper or Nixon in the Sky with Diamonds, an alternate reality, by William Scott Morrison, Castalia Publishing, Petaluma, California, 2008. This fictional story is a hoot, a rewrite of history. The basic premise is that John F. Kennedy survived the assassination attempt and served two terms, followed by his younger brother Bobby, who lost the ’72 election for a second term because he appeared onstage at Woodstock tripping on acid while Jimi Hendrix played the Star Spangled Banner.

It’s now 1973, Nixon has just won the election, but the Arab Oil Embargo has created an energy crisis. To win reelection, Nixon needs to find a way to energy independence. Could methanol derived from marijuana save the Nation? Throw in the War on Drugs and Timothy Leary along with some idealist hippie kids trying to save the world and you have a fun time. The characters are believable, the dialogue flows and there are a few interesting twists in this “fake” history of alt-facts. However, cannabis may still in fact be one of the answers to the energy crisis.

Next up, the well written, researched and entertaining Smoke Signals, A Social History of Marijuana—Medical, Recreational and Scientific, by Martin Lee, Scribner, New York, 2012. It’s a good read and overview of the scene in the US starting with Prohibition leading up to the very beginnings of legalization. I say entertaining, because Lee has a way with the right anecdote, but the story in general is a depressing reminder of the events of the “War on Drugs Era” and of all the people we knew who were caught up in that war. Still, if you want to know the story of the persecution of a heterodox group of people for the herb they use, this is the book. Since we are still in the process of figuring out legalization nationwide as well as county and state wide, we need to be cognizant of the actions of the not so distant past. The politics of Pot are tumultuous, and the momentum can switch at any moment.

On a higher level, but still very engrossing, is Chris Bennett’s weighty tome Cannabis and the Soma Solution, Trine Day LLC, Walterville, OR, 2010. Bennett takes one on a journey of discovery through time, providing archeological, historical and biblical evidence of Cannabis use as fiber, as medicine, as sacred ritual herb. For many years there has been an arcane discussion of the true ingredients of a substance called Soma, cited repeatedly with great praise in the most ancient and sacred text of Hinduism, the Rig Veda. The author makes a very convincing case that the basic ingredient in Soma, also called Hoama in Persia, was indeed cannabis or ganja.

Going back at least 4,000 years, it is revelatory the number of religious and other connections Bennett documents, including the Scythians, the Chinese, Mesopotamians, Egyptians, Greeks, Romans, Hebrews, Zoroaster, Moses, Pythagoras, Siva, Indra, even Islam. Seems like everyone was into cannabis at one time or another, but often it was reserved for the priestly caste. There is convincing evidence that cannabis was a main ingredient in Holy Anointing Oil, described in the Old Testament of the Bible. Imagine the King or Jesus being inundated with an oil very high in THC. It’s sure to be a psychedelic experience.

I’m into non-fiction a lot, and so truly enjoyed the next three rather technical titles. Clint Werner’s Marijuana, Gateway to Health, Dachstar Press, San Francisco, 2011, gives a good layman’s introduction to the endocannabinoid system, and a flash overview of ancient historical uses of the herb. It highlights the contributions of the Veterans and AIDS communities, especially Dennis Peron. There is much about curing cancer and alzheimer’s disease and recent research, ending on the hopeful note of a “Marijuana Renaissance.”

The Pot Book, a Complete Guide to Cannabis, edited by Julie Holland, Park Street Press, Rochester, Vermont, 2010, is a compendium of articles by numerous mostly academic authorities. Each of the many essays goes into great detail on a vast variety of topics covering historical, medical, legal and cultural perspectives. This is a go-to reference book, with celebrity contributors such as Andrew Weil, Michael Pollan and Raphael Mechoulam. Several of the articles focus on the medical risks and benefits of cannabis.

The most complete and impressive book of all is the magnificent Cannabis, Evolution and Ethnobotany, by Robert C. Clark and Mark D Merlin, University of California Press, Berkeley, 2013. This awesome book is not for everyone, but is destined to be THE university textbook, with its exhaustive detail and ultra fine print, many fine illustrations and photographs. An important theme is to determine the true origin of the original plants and at the same time to create a proper nomenclature or taxonomy for cannabis. They propose four main distinctions: Broad leaf Hemp (for fiber), broad leaf drug, narrow leaf hemp, narrow leaf drug.

Apparently, the Nor Cal cannabis culture designations of Indica and Sativa are not really accurate, considering that every strain is interbred and cross bred. Such that a broad leaf plant can express similar cannabinoid and terpene profiles as a narrow leaf sample.

To wrap it up, I would be remiss if I neglected to mention Teaming With Microbes, by Jeff Lowenfels and Wayne Lewis, Timber Press, Portland Oregon, 2010. This is a gardeners guide to growing biologically in living soil, creating a soil food web for growing cannabis. And a shout out for Tim Blake’s Cannabis Crusader, 2015, a self-published autobiographical adventure (although I preferred the original title “The Marijuana Man” better), about cops and robbers, growing pot and getting busted in the 80’ and 90’s.

That wraps it up for now. You might check out if any of these are available via audio for listening to while trimming. Happy Harvest!