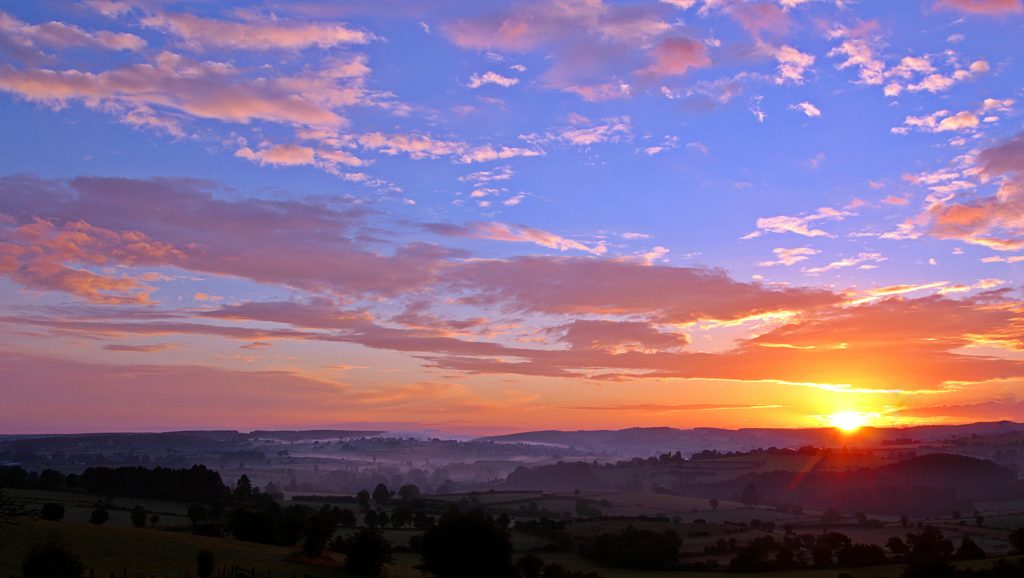 This year, I tuned deeply into the meaning of the winter solstice. While consulting the Farmer’s Almanac, something dawned on me: from December 22 to December 24, the length of night remains the same. After all, in Latin, “solstice” literally means “sun stands still.” These are the longest nights. Obviously, civilizations have reveled in this fact for millennia. Still, this phenomenon explains, in part, the restless feelings which can take hold of us at year’s end of the year. In its rhythm between light and dark, we are also offered hope.

You see, beginning September 22, the autumnal equinox or “equal night”, every successive day for the next 10 days grows darker by four minutes each night. Then, it slows a bit and there are only three minutes more darkness each day. Then, just two. Finally, night grows by one minute a day until December 22, solstice. Starting that night, for three days, the hours of night and day do not change. Maximum darkness.

While darkness increases throughout autumn, on December 25, gratefully, we welcome an additional minute of day light. Just one minute more, yes. Still, after autumn’s ever-lengthening nights, the subtle change in the momentum of our rotation through the universe is palpable. The sun’s rebirth has begun.

On December 26, and for the following 10 days, we get one additional minute of light, followed by two minutes, then three and finally four minutes as day equalizes with night, and, on March 21, vernal equinox, we welcome the first day of spring.

This mega-rhythm of each year’s seasons pulsates constantly . In fall, harvest is done, the reckoning is in. Cold comes. Leaves fall. Plants die. The garden looks forlorn. Was the yield enough to carry us through to next year’s harvest? The stress of providing for family increases as the sun’s light dims and fall transitions to winter.

For the Cannabis community, this stress has only increased, thanks to price drops, ever-changing regulations, water boards notices, compliance costs and more. For these producers, their decisions are challenging. As costs of production rise, will the effort be worth it? Will it put food on the producer’s family’s table? Questions such as these circle now around tables and in markets all throughout the Emerald Triangle. Northern California’s entire way of life is under duress, if not faced with extinction. As December 22 grew closer—and just after it the New Year and the new legal cannabis era—tension, confusion and fear flowed throughout the the Emerald Triangle community. Our worries were only made worse by this year’s disastrous fire season.

For some reason this year, I felt especially sensitive to the increasing light. It hinted toward change, toward hope, toward growth, toward the fact that, somehow, things will work out. By December 27 and 28, as the sun’s light grew by three and four minutes, my sense of hope grew stronger. We celebrated New Years with our community, and the feeling of hope was tangible to many. Even plans for this year’s crop popped into my mind during the evening. Moving forward, starting our new beds now seemed possible. There was – there is – optimism.

2018 witnesses the birth of California’s new legal cannabis era, a time rich in opportunity, a developing space in which there’s still room for co-creation, compassion and collaboration across diverse groups. 2018 also brings feelings of relief, of freedom, from the 81 years of persecution we’ve felt, sheltering this sacred plant through the shadows. As Steve DeAngelo once said, cannabis has emerged from the darkness and stepped fully the light. It’s now fully sungrown, you might say.

Of course, the campaign for full legalization for everyone continues. Also, California’s cannabis-specific regulations are a work in progress, to say the least. Yet, even though there are challenges, cannabis legalization continues to grow. This positive evolution stands testament to what determined, conscious, organized, collaborative citizens can accomplish in a democracy. No matter how rough or long the road ahead seems, have hope that, by working together—guided by compassion, patience and knowledge—the right to use this sacred herb will eventually be granted to those who feel called to peacefully enlighten and heal themselves with the support of ganja.