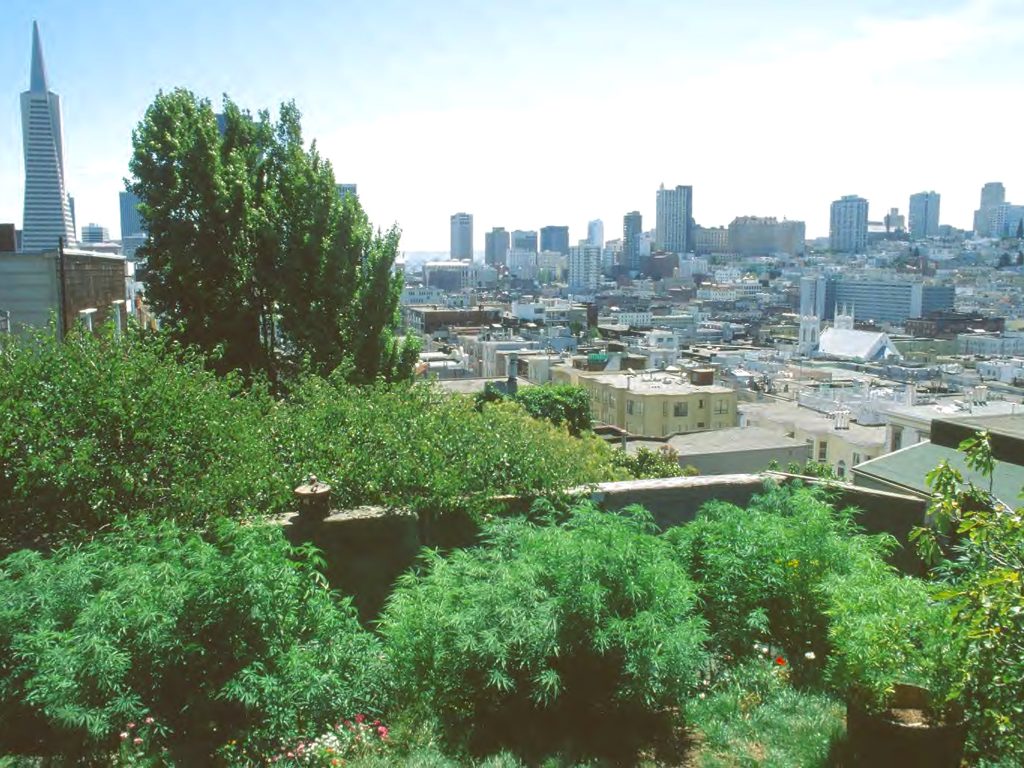 The other day my dear old friend Steve sent me a photo of my first “pot” garden, right up on the side of Telegraph Hill in North Beach, in the heart of San Francisco. It was 1977, and I was staying in Steve’s bachelor pad, tucked behind Bill Bailey’s tiny green cottage at the top of the Filbert steps. There was a funky wooden fence with a squeaky gate, also bright green. There were several very simple old cottages up on the hill that were built quickly right after the 1906 earthquake and over time the area became a bohemian enclave. Now, almost 40 years later, it is home to millionaires in luxurious apartments.

But back then, when you pushed open the gate at 367 Filbert, you went down a brick path through an overgrown garden, past a brown shingle cottage, and then left into a little tree shaded courtyard. French doors opened into a bright yellow room with two large picture windows with a sunset view of the Golden Gate Bridge. There was a fireplace, a water bed, a giant beanbag pillow and a tiny kitchen. No doubt some of my art supplies and smoking gear as well.

The girl next door, Margaret, was my girlfriend at the time. She let me grow on terraces I built in her minuscule back yard. The crop was thirteen plants. They produced about a half pound each and as I recall, and hate to admit, they were fertilized with Miracle Grow. My friend Susan, who had a grow up north outside of Chico, helped me get started. I also had a book, the name of which escapes me, that had pictures of day by day and week by week changes as the plant grew. That was my first growing guru.

In the picture, with the Transamerica Pyramid in the background, you can see the cottage windows on the left. A tiny bit of white in the lower right corner is the edge of the claw foot bathtub I placed there, hidden by the cannabis plants.

I grew there for three years and kept my friends well stoned, even traded for my rent. I always wondered if anyone working up in the Transamerica pyramid, looming overhead, looked down and saw what I was growing. No doubt they thought they were big tomato plants.

We all have to start somewhere, and this was my first garden. It was sinsemilla, but who knows the THC/CBD content and all that. It got you high, and that was all we cared about. As the saying used to go: “A friend with weed is a friend indeed.”