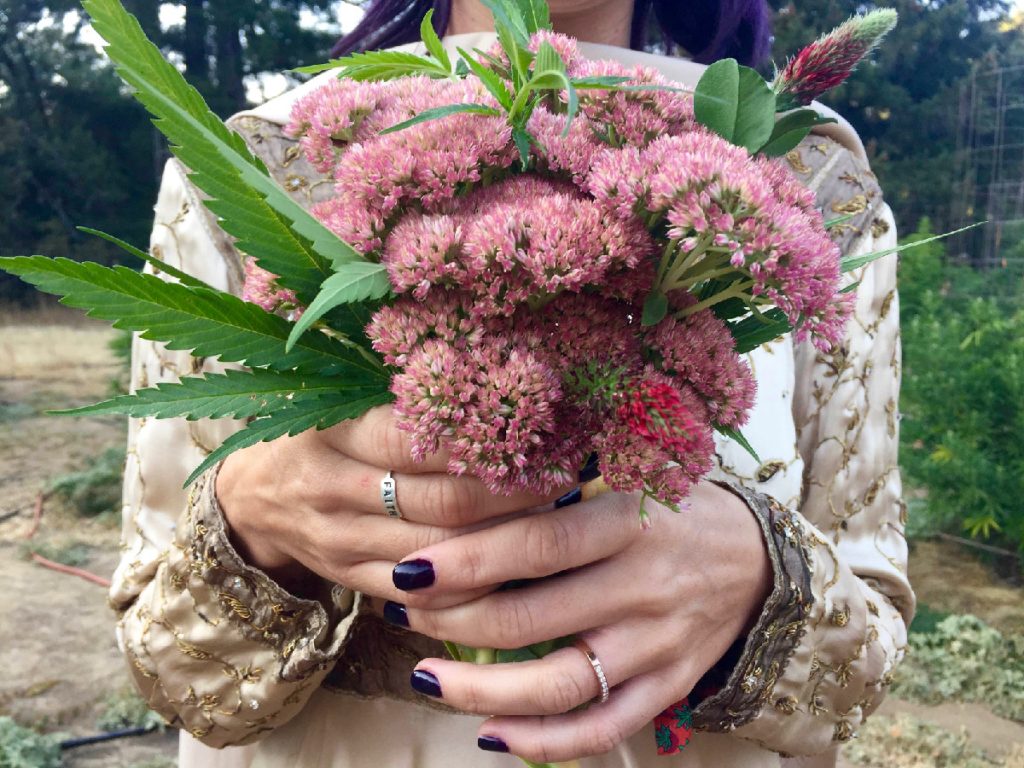 There is a small window of time up here in the mountains of Mendocino County when farmers can actually stop for a spell and enjoy the summer. The plants are starting to flower, but the threat of mold and mildew is not yet here. Other than watering, occasional pruning and weekly compost tea applications, this is when the typical cannabis farmer has a few extra hours in each day to relax and revel in the beauty of our environment. 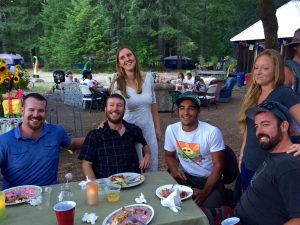 Hence, it is time to party! This season there seems to be extra Love in the air, as several couples in the neighborhood have chosen to tie the knot. It started with Amber and Casey of HappyDay Farms, who celebrated their marriage here at our ranch with a raucous dance party in July. (see https://swamiselect.com/bell-springs-boogie/ for full story). The whole neighborhood came out to celebrate as the Screaming J’s played a six hour set. 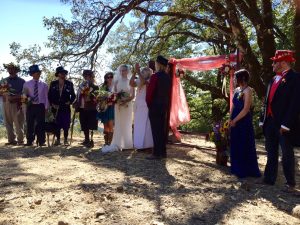 The Screaming J’s were back again a couple of weeks later for yet another wedding. This time it was for Johnny, a beloved local farmer, and Michelle, his stunning sweetheart from San Francisco. Swami officiated at the marriage on a gorgeous bluff overlooking the hills and valleys of northern Mendocino, at a nearby farm on top of the hill. It was a classic California hippie ceremony, with the groom and his “ushers” all in top hats and wacky Burning Man-esque costumes.

The bride was classically beautiful in a white gown – however, her multi-colored hair gave her freakiness away. The wedding party stood proudly before a lovely doorway covered in bowers of flowers while Swami invoked the elements and Great Spirit to protect and guide them. The couple exchanged some very sweet vows, but it was obvious they were ready to make merry – Swami had to hold them back from running down the aisle after the kiss to actually pronounce them “husband and wife”! The party went on for 24 hours of feasting, imbibing and dancing with familiar faces as well as family and friends from afar. As Casey O’Neill would say, it was a “Great Success.”

Both Swami and I really enjoy performing marriages. It’s such an honor to proclaim the Love with prayers and wishes for a long full life of good karma. Together and individually we have officiated at many marriages in unique settings and with colorful couples. Curiously, Swami has a son who lives on the island of Ibiza off the coast of Spain, and among other talents he is quite the wedding man. He performs probably at least 100 weddings a year and he does them in the several languages he speaks: Italian, French, English, Spanish, German, Ibicencan, and even some Hindi.

The final ceremony of the summer season here in Mendo was really a treat. Last weekend at the Cannabis Farmers Market at Healing Harvest Farms in Laytonville we met a lovely young couple on their honeymoon. They are both European (British and Dutch) but grew up and still live in Dubai. We could only imagine the shock of coming from the desert of Dubai to the Emerald Triangle, so we got to talking. They are big fans of cannabis who clearly can’t get much of anything in Dubai – and if they do, they risk very steep penalties. So they were literally like kids in a candy store at the market.

They explained how they had already had a “spiritual marriage” but were on their way to Vegas to make it official, when Swami and I suggested we could perform their marriage as we are both ministers in the Universal Life Church. This offer intrigued them – and so we asked more about their “spiritual marriage” the previous June. They explained that one was for their families and friends from all over the world and so they decided to do it someplace kind of central and lovely, and they chose the island of Ibiza. I bet you have guessed it by now: yes, Swami’s son had actually performed their other marriage! All of our jaws dropped when we figured this out – what are the chances of that happening when they had the entire world from which to choose a destination? Certainly fate had brought them to us! 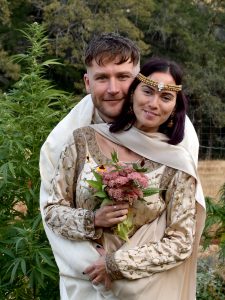 And so it was: two days later, with very little planning, we hosted a beautiful private marriage ceremony in the midst of our cannabis garden for Leah and Nick from Dubai. Naturally they were unprepared, so I dressed Leah (and also our beloved helpers Cassie and Emma who were the bridesmaids) in some elegant Indian evening wear. Swami outfitted the men: Nick dressed in a white silk kurta (Indian style shirt) and long raw silk shawl and Max, who also lives here, had on a white jacket with sequins. Swami wore his standard whites and I was some sort of stand-in mother of the bride in a long evening gown. Max, in a dual role, played Father of the Bride and Best Man.

We had whipped up a yummy cake that afternoon and created a bouquet for the bride from a mix of regular flowers and cannabis leaves. Cassie set up the video camera, we had a five-minute “rehearsal,” and we were ready to go! The marriage party processed out to the garden and the bride was escorted down the “aisle” between the plants by Max, with the bridesmaids holding her trail. It was all very formal yet, as they say, California-style. Swami offered a spontaneous and sweet blessing and then the couple exchanged personal vows. As the mother of the bride, I shed a few compulsory tears of joy! The gods of Love were invoked, the couple kissed, and we sang the wedding march all together as they exited the garden. What a blast!

As Emma pointed out later, most couples spend months of time and thousands of dollars – sometimes risking their very marriage over fighting over who sits where and wears what – and we put together a full wedding in half a day! The ceremony was followed by celebratory joints and champagne and a wonderful feast, and then some more joints and cake to die for. The lucky couple spent the night in our “honeymoon suite” (as the guest room was dubbed), complete with rose petals festooned across the bed.

Clearly, we have a lot of fun here in the land of Swami Select. And any excuse to celebrate is always welcome! Soon it will be time to settle down for harvest season and long days of trimming and curing. It is a different type of celebration, but I have no doubt we’ll make it all as fun as possible. The joy carries right into the cannabis, and to you, the patient. Feel the Love. 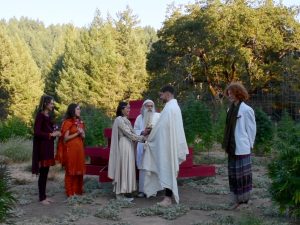