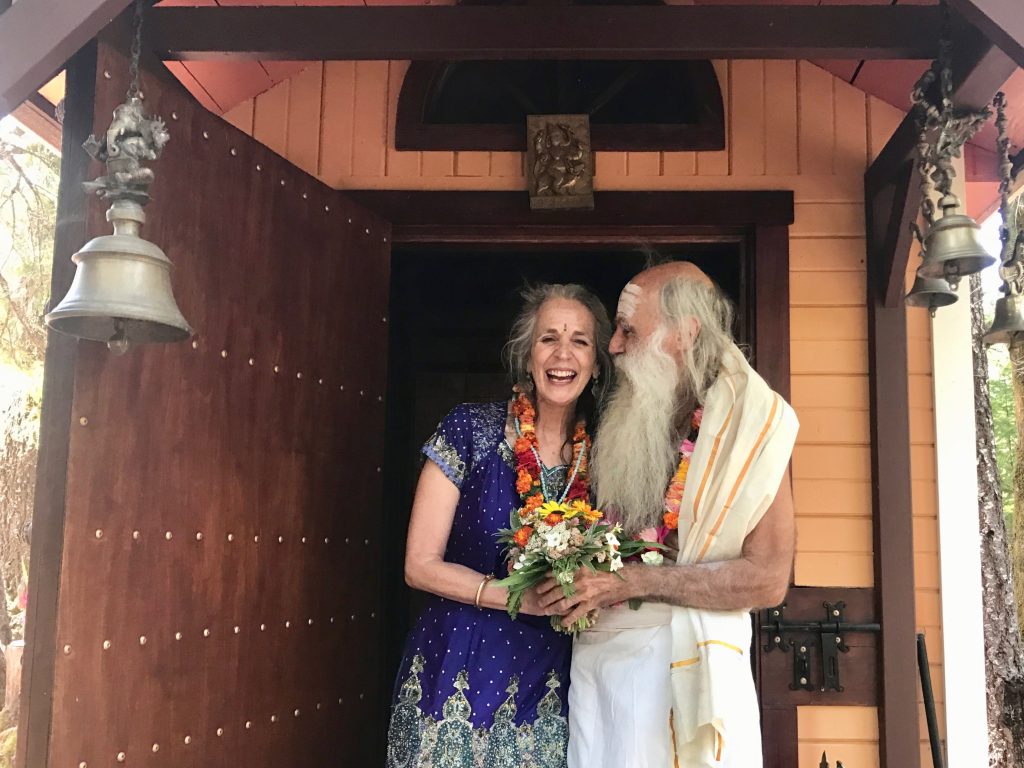 “Life constantly changes while Love remains constant.” That is my simple sounding Message of the Day – but let me share with you a little story to back it up. It’s worth reading to the end …

Back when Swami was called “William” and Nikki was a high school flower child, they first met in San Francisco in the autumn of 1969. William was part of a commune of super-cool hippy artists living in the North Beach neighborhood of the city. Nikki had wandered over there (actually, probably hitch-hiked as we did back then) to hang out. Before long, she became a peripheral part of the commune herself as, after all, she was still expected home by dark. She led a double-life, dreaming of the day she too could be a full-fledged hippy.

Life happened the way it does for the next chunk of time, guiding them on separate adventures around the globe. It wasn’t until several years later that they really met again, and that time it was magic. It was in an old fisherman’s cabin on Telegraph Hill where romance blossomed. Before long they were living together, sharing their love and their lives. It was in 1985 when they married, at City Hall, surrounded by family and friends. The party lasted all weekend. It was good.

City life can get old though, and clearly these two were the types who appreciated variety in their experiences. The Far East beckoned them both back, neither having been there for more than a decade. Off they went, the two intrepid travelers making their way back to India, where they set up homes and immersed themselves in the culture. It all felt so familiar to them, as if they had spent lifetimes together in this place. Before long, they were speaking some Hindi and visiting temples all across the subcontinent, finding particular affinity to Lord Shiva and his consort Shakti in Her many forms.

In India, they could both explore their spiritual side as well as their innate hippie characters. In the southern state of Goa they lived with the International Tribe of Freaks, who share ideals and lifestyles. They live on all continents of the planet in certain power points such as Amsterdam, Goa, Berlin, Paris, San Francisco, Peru, Brazil, South Africa, NorCal, Russia, Japan … the list goes on. Through psy-trance electronic music the gods were invited to play with the Freaks, and a whole other kind of spiritual awakening was happening. It was a life that fulfilled. Yet, even that, after time, grew old to the two.

It was Shiva who appeared to Nikki in a trance to say it was time to separate, no matter the pain. The time had come for the happy couple to become themselves, independent of the other. To discover their personal karmas. And so it happened – and it was not easy. Tears, sorrow, disbelief and anger all preceded the years which passed, while the two lovers did in fact grow into their own beings. Yet lovers they did not stay – William chose to continue living in India while Nikki returned to her hometown of San Francisco. Living in a lovely but rustic mountain cabin in the Himalayas, William spent months in thought and meditation, finally making a vow to himself that he would stay celibate until he fell in love again. In his early fifties, he was not going for the option of a mid-life crisis with the red Ferrari and sexy babes.

Now, dear friends, the two continued to meet at least twice a year on one side of the world or the other. Clearly, the bond was there. Yet it wasn’t until Nikki joined William at the Kumbh Mela in Haridwar in 1998 that magic happened again. Known as the largest spiritual gathering on the face of the earth, with literally up to 60 million visitors over a six week period, this gathering of spiritual teachers and pilgrims on the banks of the Ganges River is awesome. After receiving numerous blessings, Nikki departed home to California while William stayed on alone at the Kumbha Mela. It was about a week later, while Nikki was lost in a trance that had lasted for 24 hours and was quite unexplainable, that the phone rang at three in the morning. “Nikki, I am no longer William,” the voice at the other end said over the scratchy line. “I am now Swami Chaitanya …”

So began yet another incarnation for the two soul partners. Along with his vow of celibacy, when Swami was initiated into that specific Hindu sect at the Kumbha Mela, he also took a vow to not eat garlic and onion and mushrooms any longer and to wear only one color. At first the color was the traditional orange of sannyasins. He took a vow of renunciation and in his late-night phone call instructed her to put the home they still owned together into her name alone. They were officially divorced now legally, yet their spiritual lives were able to grow more aligned in their individual styles.

It was during this time that Nikki found a new passion: creating sacred spaces at gatherings. Living in India and abroad all those years, she had developed a “icon addiction” that was rather serious. Well, spiritually serious. Almost every weekend for a couple of years she would fill a truck with large statues and accoutrements and be off to another venue to set it all up. Gladly, she would tend it while the dancers twirled around and felt the inspiration. The parties were an excuse to make altars, and so along with the psy-trance crew in San Francisco, that is just what she did.

But it grew tiring, too. Physically. Lugging life-sized Buddhas to Burning Man and six-foot Shivas to festivals across the state was exhausting. Finally, when Nikki and Swami were visiting their spiritual teacher in South India one winter day, he simply asked her what she wanted to do now. Her answer: “Create a sanctuary where I can honor the really big murti (statues).”  Wisely, he looked deeply into her eyes and questioned, “But who will help you do that? You will need help.” When she shook her head with no answer, he quickly pointed at Swami and said, “He can do it! He can build anything!”

So it was to be. Swami was released from living in India, where he had pictured himself growing old, and returned to California with Nikki. By that time, she was mostly living in the mountains of Mendocino County at a place tending some of the large stone statues, and putting on parties. This guy named Tim Blake had a new piece of land right on Hwy 101 and the word was he was ready to open it up. Nikki moved in and helped turn the roadside dump into a party haven, complete with some very large statues she installed. It was only natural to move to Mendocino, and grow pot.

Through the grace of all the gods, a perfect piece of land was presented to them and in a matter of a couple of months it was theirs. They were advised to legally marry to save over 100 Grand in taxes on the sale of the building in North Beach, and so they did. Again, Nikki and Swami went to San Francisco City Hall, but this time there were no family or friends, and he wore the long white robes (Swami had switched from the orange by then.) while Nikki donned her regular wild printed pants. It was a business proposition and more. It also guaranteed them the right to protect one another easier in legal and medical situations should they arise. Clearly, the love was still there, just different.

Thus began the Mendocino incarnation of Nikki and Swami. They settled on the land, eager to be conscious stewards and to grow along with it. Cannabis was planted in the first garden under full sun, a new concept in what had been rough outlaw country for decades. Along with cultivating cannabis, they cultivated a community around them of curious young people, multi-generational families and the clan from The City who would escape to their ranch.

As legalization loomed, and the jokes which were traded around the trim tables for years about “someday there will be an outdoor contest” or “someday we’ll see it on shelves in stores” became reality, things were heating up. If they wanted to survive the inevitable changes ahead along with their fellow farmers, they needed to take action. Both politically and in business.

Along with helping to birth local political activist groups, Nikki and Swami created the Swami Select brand of cannabis. It became their baby. They nursed her to a living entity, another character around the ranch who needed constant attention. The next several years would be devoted to a combination of Spirit and Swami Select. As temples were built around the property, the business also developed and the gardens along with it. What their teacher in India may have foreseen as he dug in his garden one day was coming to fruition. Together, they were creating a sanctuary for cannabis and sacred devotion.

So much time together had passed when suddenly – or so it seemed to them, as they now had white hair and had become Elders – the 50th Anniversary of the Summer of Love happened. A half a Century had passed since that Magical Moment of Liberating Life for the hippie generation. Swami and Nikki had both been there – and now again the air felt tinged with an extra burst of something electric. People were reflecting on what it had all been about. Who had really remained a hippie at heart after all those years? Who had survived? They felt lucky to be where they were, still feeling the love that rocked the world … but something was different. 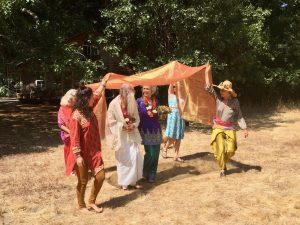 The world itself was sinking into a void of lies and despair. While life on their ranch was a bubble of bliss most of the time, they knew that wasn’t the case everywhere. An idiot and his team was running the government and The People had no idea what to expect next – the Fear was getting out of control, only to be sublimated by opiates and mass media. That was when Nikki and Swami started hearing an old song in their heads. It went like this: “What the world needs now, is Love Sweet Love. It’s the only thing that there’s just too little of …” Hmm, could Love save the world?

It seemed worth a try. Over the next couple of months the mantra of “Love and Joy” kept coming into Swami’s morning meditations – and so they decided to go for just that. To add their own Sweet Love back to the world. The heat of summer rose, the plants in the garden grew and so did their Love. It became apparent that Swami’s vow of celibacy, until he fell in love again, was ready to change. It was a whole new mature love they shared now, with the blessings of Lord Shiva and Parvati. A marriage celebration was held to honor the new vows of Love Forever, and, once again,Nikki and Swami were married, this time at their own small temple to the Hindu Devi they worshipped. 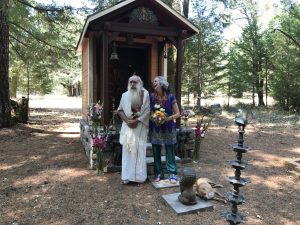 What next? Swami would stay Swami and Nikki would stay Nikki. Swami Select would continue to grow and flourish and Love would remain the guiding force. It was always there – just expressed in different ways over their lifetime. This lifetime, anyway. There have been so many together.