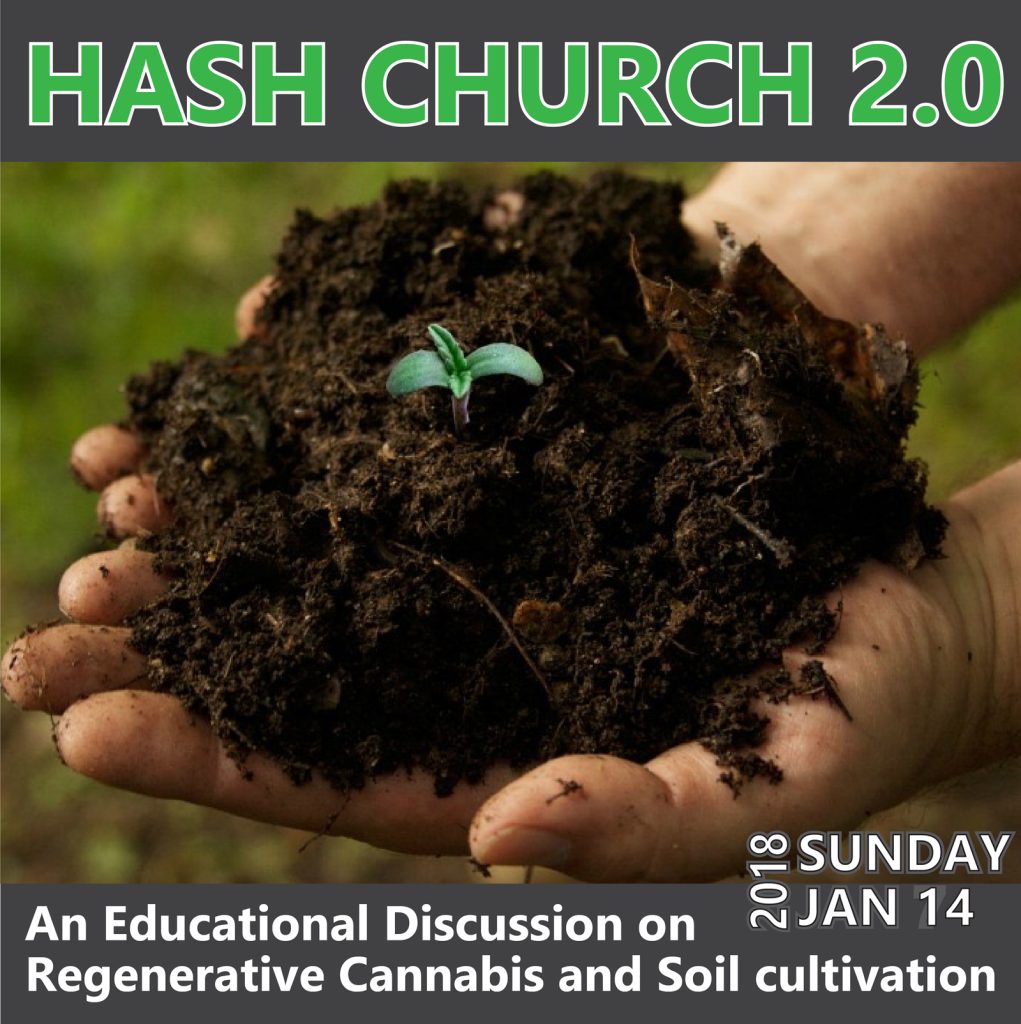 This Sunday Nikki and I went to church. Most Hindu Yogis don’t usually go to church, but this was different: this was Hash Church 2.0, Soil Edition. Amazing, informative, stimulating. It was a thrill and an honor to be part of such a stellar group. We’d heard about Hash Church for quite awhile but had never tuned in. Catch it on Youtube.  The panel was organized by Kelley and Josh, creators of Dragonfly Earth Medicine and enthusiastic proponents of Living Soil and Regenerative Agriculture.

I first met Josh at The Emerald Cup a few years ago, when Kristen Nevedal said she needed a panelist knowledgeable about organic gardening. Since then, Kelley, Josh and I have become friends, and they kindly give advice as our gardens have evolved over the years. Non-stop activists, Kelly and Josh remain committed to the notion that growing cannabis (and everything else, for that matter) must be done organically and ethically. They supply pure, organic plant-based nutrients for the garden, available on line.

Jesse Dodd of Biovortex, another stalwart in the Biodynamic branch of the Living Soil Movement, came on about half way through the discussion. Jesse created the Regenerative Agriculture Award presented at the Emerald Cup and is a master breeder who always has pertinent information.

Marcus Richardson, known as Bubbleman, creator of Hash Church 2.0, served as Master of Ceremonies. He did a fantastic job bringing together such a dynamic, diverse group. Each panelist provide thoughtful insight about the value of Living Soil and Regenerative Agriculture, useful approaches to farming, of course, which extend beyond cultivating only cannabis. These age-old agricultural tactics are of great value today as we begin to rethinking our global food system, one currently based on petrochemicals. For example, it was especially exciting to trade ideas with Jeff Lowenfels, author of several books, including Teaming with Microbes. Also on the panel were Colum Riley, creator of Malibu Compost and Daniel McAllister from Gnome Grown up in Oregon with cultivation sites and dispensaries. Joining the group were Colorado-based Duke Diamond of Dominion Seed Company. From behind his microscope, Scott Granola, provided detailed analysis of the living organisms who call soil “home.”  Check out his website for valuable information on soil analysis and the Soil Food Web. Finally, I was happy to seeNevada’s Green Life Productions whom I had talked with at the Living Soil Symposium last year in Medford, Oregon. He has astoundingly created 35,000 square foot indoor farm using Living Soil. Amazing!

One of he best things about the panel was that each person was given a chance to speak on their specialty, stimulated by pertinent questions from Josh and Kelly. The engrossing, detailed discussions were so engrossing, it was as though light bulbs were bursting over my head as more and more innovative ideas sprung forth. For over three hours, experts spoke of their passion for Living Soil.

Malibu Compost’s creator, Colum Riley, who grew up on a dairy farm, told us one of Malibu Compost’s base ingredients comes from dairy cow manure. It turns out, lactating mother cows produce special enzymes in their poop, and those enzymes produce valuable living microbes in Malibu Compost. Colum stressed the structural aspect of building a compost pile: the composition of the pile, the layering. A visit to their website is well worth it to learn the story of “Bu,” the cow who raised their consciousness. Other members of the panel chimed in to affirm the potency of the Malibu mixture.  Malibu Compost sponsors teaching workshops designed to pass on valuable knowledge so that backyard cultivators large and small can make their own. That way, they don’t have to buy it. Passionate to the core, Colum’s workshops highlight how organic cultivators value community, collaboration, knowledge-sharing and making full use of local, abundant resources available.

I was given Jeff Lowenfels’ book Teaming with Microbes last year. Reading it blew my mind. Really, the complexity and interdependence of life in the soil is astounding. There is an old mystical, metaphysical expression: “As above, so below.” I had always interpreted it as: what was in the Heavenly Realm of Divine Awareness, was also here on Earth. Jeff, inspired by Elaine Ingham, revealed in easily understood prose, that the Living Soil Web under the earth is as much alive and active as what happens on the surface. This brought about an epiphany: the microscopically visible world has its own dynamic hierarchy. His books have raised farmers’ consciousness across the globe.

Jeff pointed out a fundamental principle of Nature is the Law of Return. The forest does not need any one to fertilize or water it. Everything it needs to grow is derived from everything that falls to the ground around it. The trees replenish themselves. In cannabis cultivation, the soil is most often depleted because it is an annual crop which is harvested and removed from the garden before it has a chance to whither and return to the soil in which it grew. How can we bring the Law of Return into operation for growing cannabis? Again, the answer lays in using that which is immediately available. It means, using homemade compost and wood chips, and also making fermented fruit and plant juices from local sources.

Equally informative was the talk by Scott Granola from Crescive Soil Services. Scott presented graphic printouts of test results detailing information about the various microbes, showing in particular how the bad fungi and bacteria dominate the testings of soil taken from areas where mold and mildew infected plants grow. Scott said, “The problem starts in the soil, so the cure must start in the soil.” If you have to spray a pesticide late in the season, he went one, “It’s already too late.” All speakers agreed that if you must spray do it early as a preventative,  but best not do it at all. Living soil is your best defense, because the good microbes crowd out the bad ones.

Many growers have failed microbial testing because they sprayed an enzyme based mildew treatment just before harvest. Currently the tests do not distinguish between beneficial and malevolent microbes, they just measure the total platelet count. The Enzyme sprays are often beneficial but many also have some yeast in the mixture, so the combination of enzymes, which are microbes, and the yeast causes the inflated platelet count and the failure, even though there is no research showing these things are harmful.

Important questions about ethics of clean cannabis were also raised.  At one point the discussion came around to the central issue of Terpenes: how to increase their saturation and how to feed the plants to produce specific terpenes.

At the end, Jeff said that he was very impressed that no one had used the word marijuana instead of Cannabis. I also thought that no one had used the words Indica or Sativa either, since many have begun to realize that these two words do not really tell us anything more than the leaf size and plant shape, but any strain can produce THC, CBD, etc, and a unique terpene  profile.

If Living Soil and Regenerative Agriculture really interest you, watch the whole show. I guarantee you’ll learn a lot and be inspired – I was!