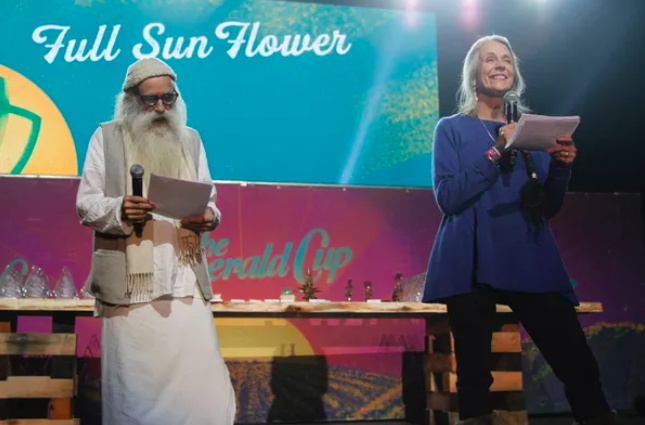 Our columnists from Northern California have been judging the greatest outdoor-grown flower at The Emerald Cup for 14 years. At this year’s competition, they sampled over 200 strains in 10 days.

This piece was originally published on MERRY JANE on December 15, 2017.

“How many entries did you sample?” is probably the most frequent question that judges at The Emerald Cup hear.

The answer? “We had 512 entries, but personally we probably only smoked about 200 of them — in 10 days.” Yup, we reviewed about 20 strains of the best outdoor-grown cannabis on the planet each day.

Luckily Swami and I are pros at this — we’ve been judges at The Emerald Cup since its inception, 14 years ago. Only 23 people entered that first year, back when it was an insular affair held in the grow mecca known as The Emerald Triangle, and most of them were anonymous, as we were still farming surreptitiously. The early Cups were held at the infamous “Area 101” in Mendocino County, home of Tim Blake, founder and producer of The Emerald Cup, as well as the site of many memorable cannabis and music events. We’d cram maybe 500 people into the small venue for the awards party, and as the winners were announced, judges would pass out samples of that particular strain amongst the crowd. The room would get so filled with smoke that you could barely see. 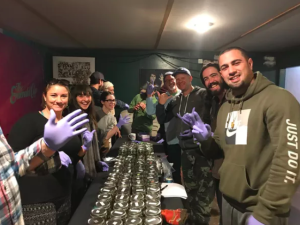 The Emerald Cup, the world’s first exclusively sungrown organic cannabis competition, has expanded exponentially every year since then. Upwards of 30,000 people gathered last weekend at the Sonoma County Fairgrounds in Santa Rosa, where the event is now held. Today, the competition features 15 separate categories, but “Flower” remain the highlight of the awards. Let’s face it, there wouldn’t be any tinctures, edibles, concentrates, topicals etc. if it weren’t for cannabis flower.

This year, we had 15 judges from various California counties on our panel, and we rocked it. Our first meeting on November 27th lasted for a solid eight hours. About 200 jars greeted us that day, laid out across long tables. It’s always a sight to behold all that beautiful, organically-sungrown bud at once. Without even smoking any of it, we dove in and spent the first several hours sorting through to find possible contenders. Basically, if the entrants had no noticeable terpenes (aka fragrance) and didn’t look well-trimmed and cared for, they were disqualified. Once we had removed over half of the jars, we set to smoking some of the ones that really stood out. How could we resist? 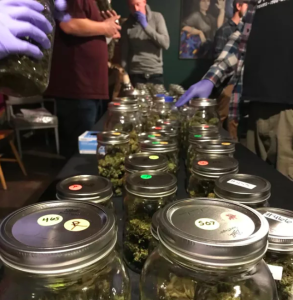 There was still a lot more to come, as SC Labs was finishing up testing later entries for pesticides, cannabinoid ratios, and terpene content; they would arrive for our next meeting. Even dedicated smokers like us had to realize there was no way we could try every entry. So we divided into three teams of five, each of which was responsible to test 23 strains. Every judge went home with that many one-gram samples to examine more thoroughly over the next couple of days. 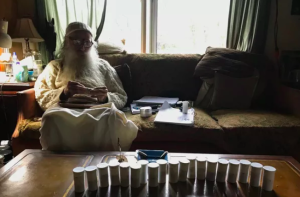 24 hours later, Swami and I settled in for the long haul, samples displayed before us, and began the testing rigamarole. We prefer to always sit in the same place on our couch to sample — that way set and setting never changes and all get an equal shot. First we observe the look: Is the flower well-trimmed? Well-cured? Is it sticky, oily, or waxy? Is it covered with crystals? Did the farmer leave the dehumidifier on too long and dry it out? Does it have exceptional color? We’ll pull out our magnifiers and give the trichomes a good look to see if they are clear, cloudy, or amber, as well as if the heads are still on the trichomes.

Next, we progress to the smell or what we call the nose, which is so very important; it’s the terpenes which alert us to the various medicinal and inspiration qualities in a given flower sample. If it’s got “jar jumping terpenes,” we know she’s got a chance. Some judges will attempt match the fragrance with the strain: “Oh yeah, that’s gotta be some of that Cherry OG strain from Mendo,” they’ll state proudly. But what does she really smell like? After the sample is ground up and we take one last whiff of the aroma, we prefer to compare an entrant to something other than cannabis — not unlike a wine connoisseur. We may find a strain that has the sweet fragrance of jasmine blossoms, another with the pungency of a pine-scented cleaner or lemon zest, or perhaps it’s the rank odor of a stinky armpit or new Converse Chucks. Hell, maybe it’s a combo — now that can be intoxicating!

While Swami gets to know the bud by grinding and rolling, I tend to stay busy jotting down notes and evaluations. Together, we’ll decide on the scores for each category — 10 points maximum each for the looks, smell, and taste, and then double points for the effects. When the joint is finally rolled and ready, we first take a “dry hit” on it — as this also has a unique flavor to consider. 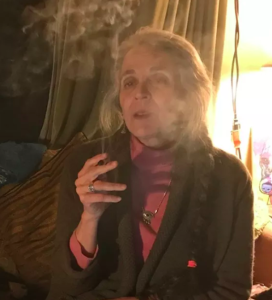 Finally, we smoke. Some judges prefer to use pipe, but we are old joint fans from way back. We only use Elements papers to be consistent, and we really think about each hit’s flavor and effect. Does it taste like it smelled? Is it a pleasant taste and does the flavor last through the entire joint? Another thing to consider is whether it has a nice white ash — black ash is never a good sign.

But let’s face it, it’s mostly about the effects. Some come on faster than others, some are more of a full-body high with waves of relaxation, while others are extremely invigorating. Sometimes we’ll be exhausted at midnight after a full day of testing, and we’ll smoke that last joint of the night. Then zip — we are awake for another hour! Occasionally, we’ll have what seems like a real contender with wonderful looks, great smell, and awesome taste… then eh? No noticeable effects. All of these factors are considered in the final score for each flower entrant.

After the subsequent judge meeting, we were sent home with over 100 samples. Our assignment was to check them all and then narrow it down to the Top 20 from each of the three teams. When the judges gathered next, we combined scores and came up with the semi-final Top 64, which we took home again to really check out. Over the next two days, we smoked some of the best cannabis in the world, non-stop, looking for our personal Top 20.

Everyone asks us, “But how can you possibly tell what strain is better than the others when you have smoked so much already?” Let me explain. After the first couple joints of the day, we basically hit a pleasant plateau of stonedness. So if then we smoke something that really cuts through, you know it’s a contender, and certainly worth checking out again more closely. The cream does rise to the top.

Take this year’s winner, for example. We knew her simply as #392 — a number which meant nothing to anyone else, as this is a totally blind competition. Her buds were kind of small — well-trimmed but not super gorgeous — yet she somehow had that look of potential greatness.

It was late one evening when we sampled her. Three friends were over to help us discern the best, and after delighting in the fragrance Swami lit up this tiny, one-gram joint. She smelled yummy — an earthy aroma of fertile soil and pine needles, with some spicy oregano and sage — and from the first to the last hit she was equally delicious. Within a couple minutes, the five of us were laughing hysterically, wide awake, and felt fantastic in general. This was what we were looking for, the medicine that creates joy and inspiration. Even better, several other judges had the exact same experience, so we knew she was a winner.

The final meeting of the judges was on the Wednesday before The Emerald Cup weekend began. Each judge arrived with his or her personal Top 20, and we collated it all together to come up with two very clear winners. And so the real smoke-off finally ensued, as we tested the best of the best to determine which would receive the coveted First Place. After several hours of deliberation, the final Top Twenty was official, but still secret. The winners would be announced on Sunday around 4:20pm.

And so The Emerald Cup commenced. At the close of what had been a wonderful weekend of cannabis cavorting, with excellent educational panels, first rate music, and endless booths offering cannabis in every imaginable form, the time had arrived. Nearly 5,000 people packed into the Grace Pavilion at the Sonoma County Fairgrounds to listen to two hours of presentations and awards to winners of the many categories of competitors. Being the original reason for The Emerald Cup, and the heart of the competition, the flowers are always saved until last.

Swami and I have been honored to present the coveted award over the past several years, and this year was no different. Once again, we found ourselves on stage as the crowd grew silent and awaited the announcement of the winners. Starting at #20 we gave a brief description of each entrant, including the name of the farm and the strain. While waiting for the Top Three to come on stage and receive their awards, we took great delight in enumerating their outstanding qualities. It’s always such a thrill. This year, First Place went to Molecular Farms in Monterey County for their “Lemon Crush” flower. This group of growers clearly knows what it’s doing — bravo!

When we returned to our Swami Select booth after the show, a sweet young couple came to greet us. “Thank you, we won #11 and it means so much to us,” they said with actual tears in their eyes. “We just lost our home and everything two days ago in the Ojai fires, and getting this award gives us hope for the future,” they explained. Ah, this is what it’s about: Honoring the best and acknowledging the cannabis farmers who truly care about the plant and the patient. Their passion always comes through. They should be proud, and we were happy (as always) to be their vehicle to recognition.

Check out MERRY JANE, and get to know the cannabis movement through their informative, engaging content. Check Nikki and Swami’s other articles, like Dispatch from the Emerald Triangle’s Golden Tarp Awards.