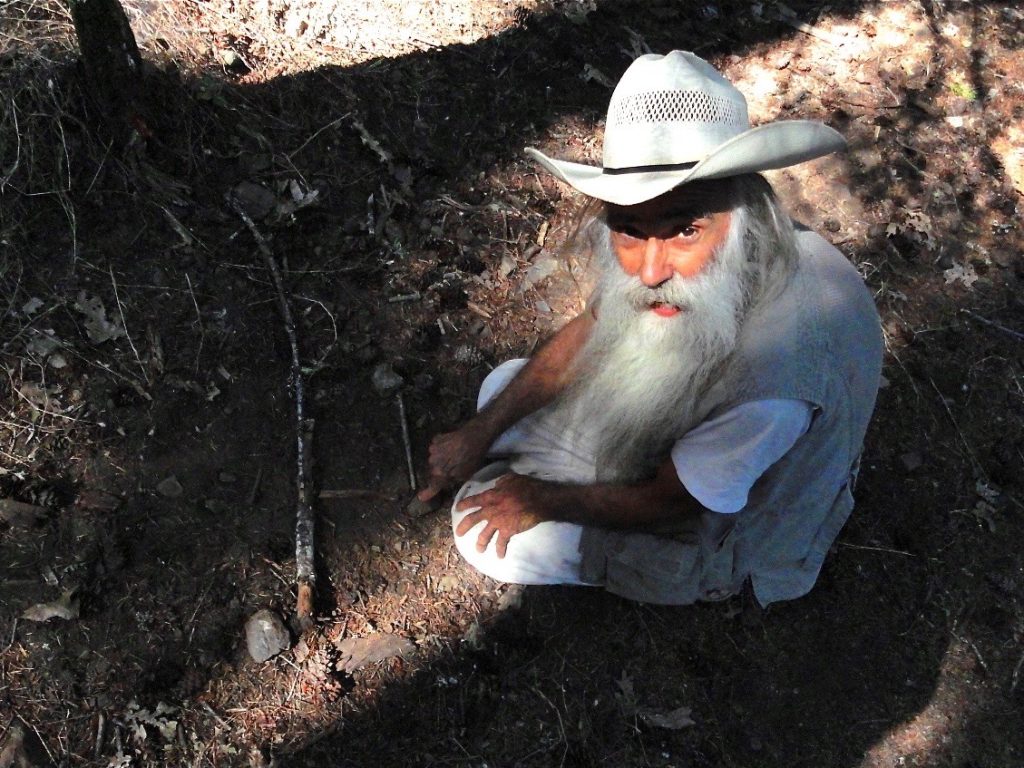 It’s the dog days of summer and the issue is water. I checked the intake pipe for the spring water the other day and it was down to a trickle. That didn’t seem right, so I went on an investigation, tracing the line back to the source. Just below the spring is a vent pipe which was spewing out water. Back to the barn to get some tools and materials to work on it.

But the question is, why is the water backing up and spilling out the vent pipe? Most often it is from an air bubble in the line which causes what is known as a vapor lock. The air pocket is compressed by the water pressure until it is exactly the same pressure as the water. Somehow this prevents the water from flowing through the pipe. It usually happens when there is a down-up dip in the line of the pipe. The trick is to find where the air bubble is. One solution is to put air vents at strategic spots so as to bleed the line in several places.

Running back and forth through the forest, I installed three air vents, sometimes called stand pipes. These are put in with “T” fixtures with a straight pipe sticking up to a height above the level of the spring. When I cut the pipe to install the “T”, the water came bubbling out, way more powerful than the trickle going in to the tank, so I knew there was more water coming from the spring than I was actually collecting.

Once the vents were in, I moved to where the pipe connects to the tank and eliminated the last dips. Lo and behold, the water was coming in a lot stronger.

At this time of year, everyone has water issues. During the winter months when the water is just gushing out, I “capture” water, as they say. When full I have about 33,000 gallons in tanks, but now I am down to less than half of that. But this is also the time when the plants need the most water. The days are burning hot, the plants are in their last grow phase and many are beginning to transition into their flower phase.

Because I am working towards sustainability, I am philosophically against bringing in a water truck to supplement the garden’s water needs. Fortunately, we have a pond we can pump from if everything else runs out. We have also stopped taking daily showers and ask our guests to bring bottled water when they come to visit.

We only need to get through the next month, because as the flowers mature and it gets close to harvest I will start to cut back on the water. The reasoning is that most of the landraces of cannabis that are the original strains brought to the Emerald Triangle many years ago, originated in or near the Himalayas and on into Afghanistan. The climate there revolves around the monsoon, which starts in early July and ends in mid-September, during which time it pours and pours, sometimes for 3 days straight. This is their maximum grow period, so I sometimes water twice a day. Then in late September as the plants are finishing up their flowering, the rain in India stops. Just like the number of hours of darkness triggers the flowering phase, the drastic reduction of rainwater tells the plant it is time to finish flowering.

My feeling is that reducing the water in the last weeks before harvest increases potency and stimulates the plant to finish early. Of course this means one needs to stop any nutrient feeding somewhat early as well, so as to allow time for a flush. It is quite a dilemma then, however, as we pray it doesn’t rain on the girls and threaten mold or mildew on the plants, yet we also begin to pray for rain to nourish the land and fill our tanks for yet another season.