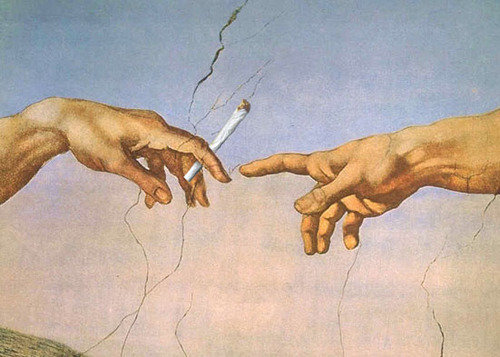 Lately, I have been musing about numerous ironies in the world of cannabis and how that

world intersects with everyone else. Inside the Cannabis Counter Culture, there is a Harry

Potter-like disconnect between “heads” and “straights” or wizards and muggles. The irony being

that the word “Muggles” is the name of Louis Armstrong’s best known song celebrating reefer.

Clearly, straight people haven’t got a clue about what is really going on – about how many

millions are medicating, creating, healing and raising their awareness through cannabis. Within

the movement we have our own language, our own leaders and our own issues.

Another evolving irony is Dr. Sanjay Gupta, of Indian heritage, who was originally against

cannabis, seeing no use for it as medicine. Now he is actively campaigning for its use with

epileptic children. There is double irony here, because India is the mother of cannabis genetics.

children, who live in states which still persecute cannabis users, need to move to a medical

marijuana friendly state in order to save their children’s lives.

medical use. And the height of irony, or is it tragedy, is that anyone can use that weapon to kill

someone and be acquitted for standing their ground, defending their home, while another

person caught with a few grams of pot is sent to jail for 10 years. Yet if there is a marijuana bust

and guns are found, even if they are not used the supposedly sacred 2nd amendment rights

become null, and it is a serious felony.

unregulated, the only business in the so called capitalist world that is truly laissez-faire. It is pure

capitalism; the market rules. There is no taxation, except on dispensaries. There are no

controls, no inspections, no records, no bank accounts, cash only and no statistics. It is all

based on trust, friendship and face to face contact. And it works beautifully. Growing, marketing

and distribution systems operate efficiently. It is all self policing.

But again ironically, the busts, asset forfeiture and plea bargain settlements (which if done by

anyone other than law enforcement would be called extortion), actually provide the funding for

the police and sheriffs departments to arrest cannabis farmers. The police have a monetary

incentive to persecute growers and users. Even if charges are dropped, it is a tough fight to get

one’s assets back and one is still out attorney’s fees. Worse yet, the crop, that is the years

grown. This restriction has the effect of spreading out the wealth, since with few exceptions,

most farmers have fewer that 100 plants. A greedy grower faces a much greater risk of arrest

for exceeding the plant count. Thus, no one seems to be getting super rich, which all could

change if the giant corporations come in. Cannabis is the last vestige of the family farm upon

which this great nation was founded.

The supreme irony is that guns, booze and tobacco, each of which is responsible for

tens of thousands of deaths a year, are totally legal and readily obtainable. Whereas cannabis,

a source of oil, fiber and protein, and also a healing herb which by all accounts has never

caused a single death, is defined as a Schedule One substance with high potential for abuse.

Local jurisdictions define cannabis as a “nuisance”, which means certain constitutional rights are

Thus cannabis, which has more beneficial uses than any other plant known to humanity, is

banned, outlawed and its users persecuted. How ironic is that?