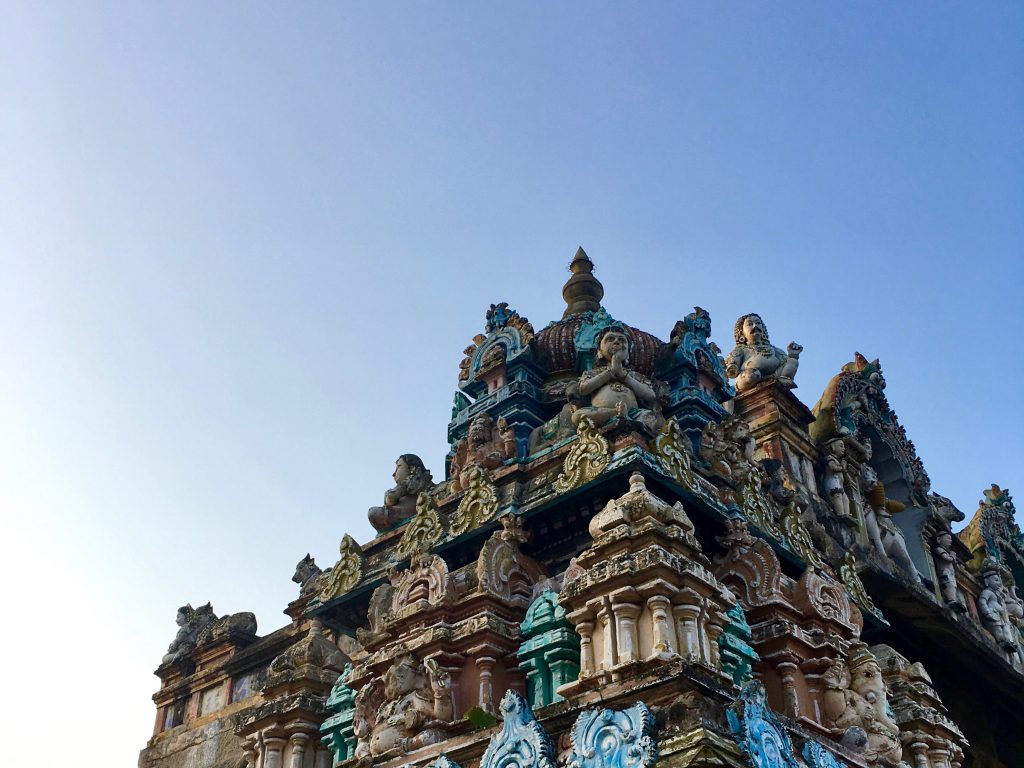 We just got back from a flash trip to India; seventeen days door to door. It really was a pilgrimage, or Yatra as it is called in Sanskrit. Other than the few days in Chennai and Delhi, the real purpose of the trip was to return to the two major temples in south India where we had encountered our spiritual teachers many years ago. It was time to recharge.

For me it had been 12 years since I had been there and for Nikki it was 10. For Cassie traveling with us, (she does our social media and is co-creating the garden with me) it was only three years since she had been living with a family up north in Varanasi.

In South India, the changes were unbelievable and glaringly obvious. All our favorite old fashioned Ambassador Cars were gone, replaced by hundreds of thousands of Toyotas and Suzukis, even some BMWs and Mercedes. The streets were packed. Even on the numerous new pseudo freeways and overpasses it was bumper to bumper everywhere, with everyone working their smartphones to discover the least jammed up route. Not exactly bumper to bumper, as the concept of lane driving still doesn’t exist in India.

All the major cities we buzzed through were bustling with incredible energy and vitality. There were huge new skyscrapers with the most outrageous architectural embellishments and radical designs. Of course the garbage piles were higher than ever, plastic of all sorts littered the landscape and the slums were even bigger. Still there was this incredible energy where everyone seemed to be under 30 years old and busy with something – even if only plans, usually over the ubiquitous mobile phone.

Escaping the major metropolitan areas (which in India means fewer than a million people), a timeless mystical presence prevailed. Especially inside the temple walls at Chidambaram, home of Shiva Nataraj, Lord of the Dance. Nikki and I had visited there many times and had been “adopted” by a family of Brahmin priests, when they found out that Nikki’s February First birthday was shared by the Father of the clan. At one point, I spent six weeks there on my own, receiving teachings and initiation about Sri Vidaya from Thangasabapity Deeksheetar. It was fascinating to observe Cassie as she fell under the spell of being again in a powerful Shiva Temple, entranced by the ritual. 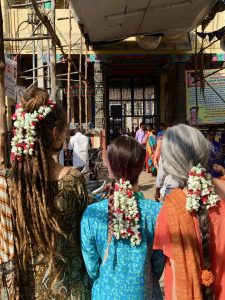 Being back in the giant stone temple was as magical as ever. The 40-acre complex was constructed a thousand years ago. Hearing the huge bells ring out the puja ceremony and the ancient Vedic chants reverberating through the stone halls, smelling the incense filling the air and watching the priest make the sacred gestures as he poured the libations over the lingam this was timeless. There was a rush of shakti (energy) when the priest, Selvaratnam, draped a giant flower mala over each of our shoulders.

We went to the priest’s house and were shocked to discover that my teacher, his father, had passed on some years earlier. They had never told us. When I touched the golden altar shrine to his memory, I received a bolt of energy, just as I had received shaktipat from him many years earlier in that same room, a moment and transference of energy which changed my life.

Then it was on to the next temple in Kollur, flowing with the thousands of pilgrims crisscrossing India during Yatra season.  Chidambaram is near the east coast on the Bay of Bengal, while the goddess temple to Sri Mookambika is just inland from the west coast, not far from the Arabian Sea. Sri Mookambika is the Goddess who slays the Demon of Silence. She is the amalgamation of Maha Kali, Maha Lakshmi, Maha Saraswati and is the Inspiration for and Protectress of our ranch and Ganja Ma Gardens.

“Doing Yatra” is primarily large groups who charter a bus and visit a different temple every day, sleep on the bus and cook their own meals. They will often all dress in one color, the women draped in sarees and the men in lunghis, an Indian sarong.

Nikki and I have been to this temple town many, many times, starting in 1986. I stayed there for over a month in the nineties, going to temple to meditate three times a day. We know many of the priests, who, strangely enough, had all gotten older. This only emphasized that we too had aged dramatically in the intervening years. Here too, once inside the temple the magic was still potent. The familiar faces of the priests opened in smiles as they recognized us from long ago. They took us to the front of the line and gave us special darshan of the goddess, kneeling on the silver clad steps to the inner sanctum. Our teacher, His Holiness Swami Chidananda Giri, who lived here, passed on back in 2004, so we did visit his place where he entered samadhi.

Later, we went to Suresh Bhatt’s house (our family priest) to give him pictures of the Temple to Sri Mookambika that we have created here at the ranch. He taught us the words to chant when we do puja to the Goddess.  As I said, the Goddess is the Inspiration and Protector of our land. It is She who moves us to speak about the spiritual foundation of the power of Cannabis to heal and inspire. She takes special form here as Ganja Ma, Goddess of Cannabis.

Again, I had a transmission of energy when I pressed my forehead against the stone wall which is the rear wall behind the goddess inside, where countless pilgrims had pressed their foreheads for hundreds of years. Recharge. Cassie, too, had a bolt of energy, when she prostrated to Bhairav, the wrathful form of Shiva. Nikki was, as always, focused in on the ritual conduct of the priests and the way the deities are presented, to inspire the creation our altars at home.

This Temple sits at the edge of the jungle, near where two streams join together. Our Temple here at the ranch 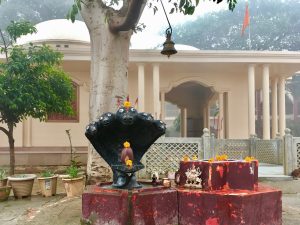 likewise sits at the edge of the forest near where two streams conjoin. Cassie and I took a long walk through the jungle up to a waterfall near the headwaters of one of the streams. It was a magical walk. Cassie kept finding exotic mushrooms, just as she does here,  we saw beautiful butterflies and we puzzled over the strange sounds emanating from the under brush.

While Cassie went on to Varanasi, our final stop was back in Delhi where we stayed at our favorite guest house in Greater Kailash. Our friend, Isabel, the English woman who owns it, is deeply and excitedly involved in helping abandoned girls at an orphanage get an education and transform their lives.

The final highlight was to meet with my younger son, Melchior, who along with his girlfriend/partner Eleanor and a diminutive, dynamic Japanese Chef, Reina, has opened a restaurant near the brand new airport south of New Delhi. Gurgaon is an up and coming area with 5-Star hotels nearby. The food, a fusion of Japanese, Mediterranean and Indian cuisines, was absolutely delicious. The best meals we had on the whole trip.

It seems this was a journey where we kept bouncing between the flashy speedy new metropolitan India and the ancient tradition-steeped world of the Temples and their priests. We did get recharged with spirit and feel ready to bring it back to the new America and the world of California cannabis.