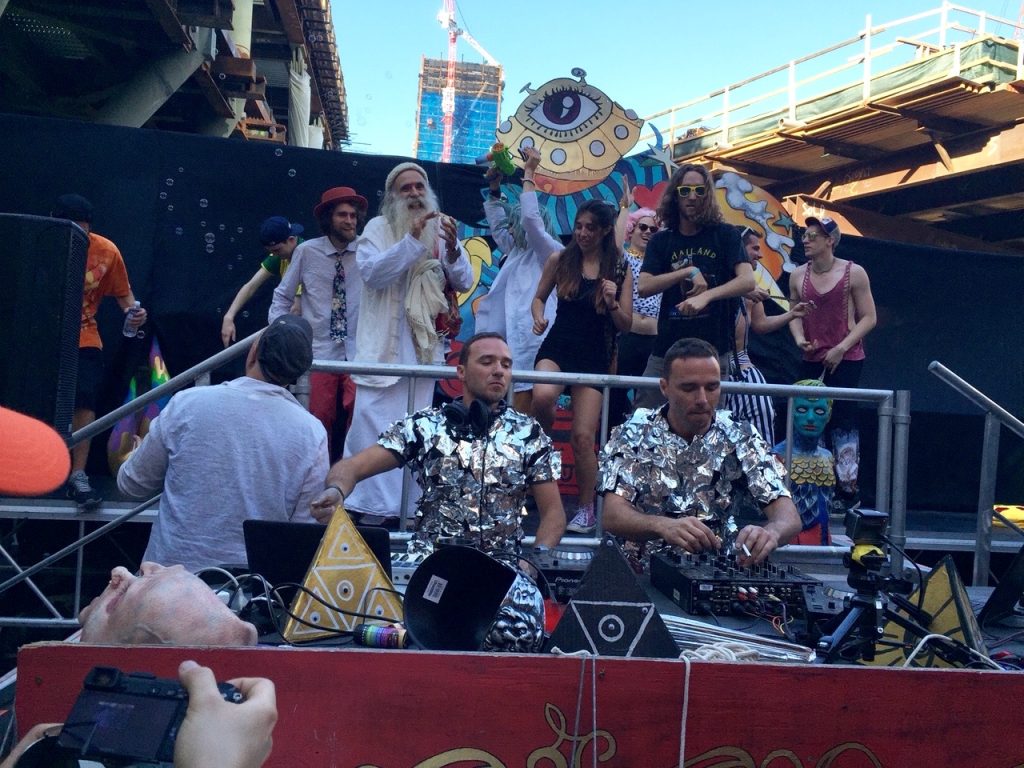 Nikki and I went to the How Weird Street Faire yesterday. It was the 17th year of a festival that started off as tiny celebration in front of the CCC collective’s warehouse space on Howard Street, with just a few hundred stoners partying. CCC stands for Consortium of Collective Consciousness and it brought together a bunch of people who had first met in Goa, India, where they had been initiated into the psychedelic trance music scene. Goa is where it all really came together, dancing under the coconut palms from midnight until late in the morning.

For many years at the Faire, Nikki and I put up altars, which helped make the India connection. Recently, it has gotten so big it has transformed into a sort of vernal urban Burning Man. It is now become “Opening Day” for the outdoor festival season. We hadn’t gone for a couple of years but decided to check in this year when producers Joegh Bullock and Justin comped us VIP tickets. It was obvious by the huge crowd that even the $20 Magic Sticker Donation didn’t deter anyone from coming out to Dance in the Streets.

With ten dance stages, hundreds of vendors and food stalls, an Art Alley, and thousands in outrageous costumes, the Faire lived up to its reputation of rebellious revelry. As Nikki said, “Anytime I get to dance in the streets, I’m gonna go for it.” And dancing in the streets has a long and honorable tradition.

All over the world, the people gather to celebrate themselves and their culture by taking over the streets. Mardi Gras, Carnival in Brazil, Fasching and Octoberfest in Germany, Hari Krishna festivals in India and many other countries, are some examples of the common people taking over the streets, which normally belong to business and transport.

Mind you, dancing in the streets is very different from parading or marching. There, individual expression is suppressed, uniforms are imposed and being in step is demanded. It is also different from demonstrating or protesting in the Streets, where there is a serious intent and a unity of purpose. There, too, eccentric behavior and risqué costumes are not tolerated.

At How Weird, in contrast, the unique and the outrageous are celebrated, while dancers move to the beat in their own inimitable style. It is like, we “Liberated” downtown San Francisco from its constant pursuit of profit, and turned it into a mecca of “Life, Liberty and the Pursuit of Happiness.”

One of the most exhilarating things about the Faire is the thousands of young people who come from all over the Bay Area and beyond to dance and display their sartorial creativity. Perhaps this is because there is no age restriction on participation: anyone can come and party.

We have known the organizers of this festival since they were in their late twenties and early thirties. Now they are in their forties and fifties, and some even are graduating into their sixties. At seventy years now, I have witnessed this phenomenon of twenty and thirty year olds creating something special and as they mature, the next generation moves in to revitalize and reinvent the concept, bringing their own new twist.

The Hippies in the Summer of Love, when I first got to Haight Street, were recreating the Beatniks rebellion with our own style and philosophy. Then came the Punk and New Wave transformations, then Hip Hop and I guess we have to put Disco in there as well, all leading to House and Dub and then Psy-Trance. Now we have EDM and a lot of genres I know nothing about because they belong to the new young people. The Beat goes on.

At the Festival, I ran onto some of my old friends who have been putting on the event for years. We shared our astonishment at how it has all grown, year by year, expressing gratification at the response of the younger generation who have picked up the baton and will pass it forward. Some of the “Elder” DJ’s were also hanging out, Peter Z and KJ and Goz and Spook, and we reminisced about previous festivals while we danced to the beat of the next Generation who were now in the DJ Booths.