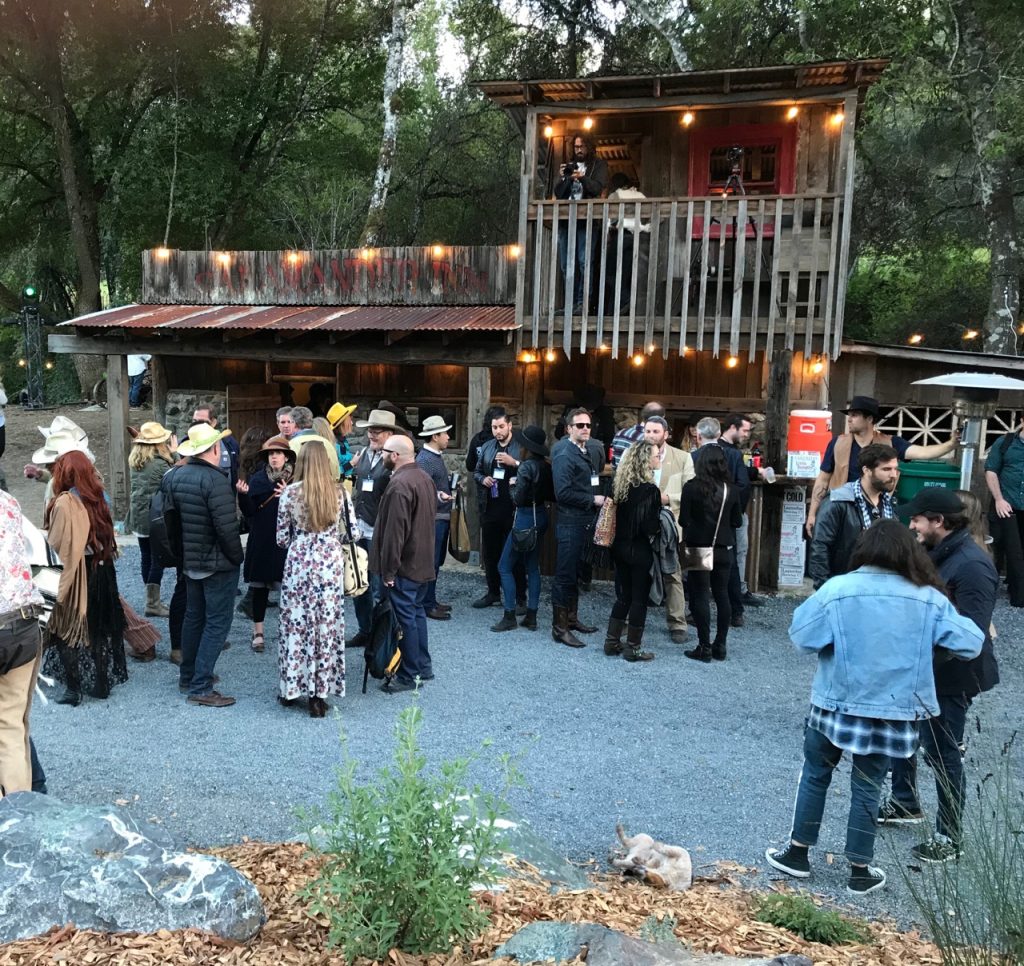 Welcome to the cannabis revolution going on in the New Wild West – Mendo Style! Last Saturday afternoon, and well into the night, it was evident that cannabiz is here to stay at the official launch of the Flow Kana processing facility. Located in the village of Redwood Valley in the southern part of Mendocino County, on the site of the old Fetzer Winery, the vast property and all its various facilities sat vacant for 15 years. Much of the neighboring area had burned to the ground in the fierce fires last autumn, but the winery was spared. Now Flow Kana, and the opportunities it presents for jobs and economic growth, is a harbinger of hope in a time of harsh realities.

It’s been just over a year since we first visited the dilapidated winery with founder Mikey Steinmetz. He’d taken us on a tour of the ginormous old industrial buildings which used to hold the barrels and the equipment it took to produce many cases of wine. His talent is his vision: Mikey was able to see the future of Flow Kana in those cavernous halls with the moldy walls, rotting floors and holes in the roof. The original farmhouse, a classic large white country home, must have been ideal for the 11 children in the Fetzer family, and the wear and tear showed. But Mikey could see offices, work areas and meetings spaces, as well as a comfortable living area for him and his wife, co-founder, Flavia Cassani. The place was perfect!

From the small bicycle delivery service Mikey and his team launched in San Francisco in February of 2015 — what Mikey called—“the world’s first farm-to-table cannabis delivery platform”—the new facility is an impressive leap. The bicycles didn’t last long as they quickly realized that San Francisco is built on steep hills. Instead, Flow Kana rapidly expanded to serve much of the Bay Area via phone app and dependable delivery. Mikey has a brilliant business brain that literally goes into high gear when an idea is born – you can almost hear the wheels turning. While it has always been easy to believe in Mikey, seeing how his vision has manifested, I understand why he is so convincing. What Mikey says he’s gonna do, he does!

When Flow Kana decided to expand into Mendocino County in order to provide the craft farmers there with processing and distribution services, it must have been a tough decision, but the discovery of the old winery, in a perfect location at a decent price, was a sign that the path was open before them. It won’t be a smooth path, dealing with the local government’s necessary permits and regulations, but the potential is great.

After several rounds of creative fundraising, the project to convert over 100,000 square feet of space into a cannabis processing center/distribution hub/community gathering space began. Thanks to large crews of workers, it appears they have managed to accomplish the transformation in a very short time. The decaying walls, now painted crisp white, soar three stories high in the vast interiors of the immense warehouses. The main processing area is filled with stainless steel tables, shiny processing and packaging equipment as well as racks and racks of shelves. Employees in white lab coats flash orange-gloved hands as they fill pre-roll cones or stick labels on jars. They all wear hair covering, have set hours and get paid every two weeks, taxes withheld, like any other regular job.

That may mean nothing to You, the Reader. But to Us, the Farmers, it is huge. And weird. And a little uncomfortable. But as Ross Liberty, an influential conservative businessman in the County, was overheard saying at the official launch of the new site last weekend, “This is the future.”To that I reply, “that is a first!” Is the old guard actually catching on to the economic benefits of cannabis?

Amanda Reiman is one of the brightest stars in our cannabis community and Flow Kana is blessed to have her as their Head of Communications. I can feel her touch in such gestures as inviting the Board of Supervisors who run our County, the County CEO and County Counsel, the new Cannabis Program Manager, as well as various Staff members whom we often see at BoS meetings. The blending of the worlds was a wise and open-hearted move which offered a rare opportunity to speak with those who are usually on the other side in the Supervisors’ Chambers.

There must have been 200 people there, Mendonesians as well as Bay Area folks: partners, investors, potential investors, the press, numerous staff and a few of us Farmers. Some people did express wonderment that there were not more farmers represented, and I have to agree.

Flow Kana pulled out all the stops. The Launch event started with an official ribbon cutting by the Chamber of Commerce, followed by inspiring speeches and general gaiety. The theme was Wild West, and many guests dressed the part. Plus, the Enchanted Forest Festival producers were brought in to add colorful deco and music. The mood was certainly festive.

Tours of the refurbished buildings were conducted during the afternoon, punctuated naturally by smoke breaks. Guests were astounded by the bright sterile facility; few had ever smelt or seen so much fresh bud in their lives. Overstuffed bags of shake the size of garbage cans lined some walls. Workers buzzed about – the processing plant was humming.

Following the tours the guests headed over to the Big Dog Saloon. What a cool spot! The funky wooden buildings are like Wild West meets Prohibition era. It was in fact a speakeasy back in the day, witnessed by an old-fashioned long bar that fills the narrow Saloon space, which that evening was packed with people rolling joints on the it. DJ Dragonfly was spinning groovy beats in an adjacent dance area. The sloping dance floor didn’t seem to bother determined dancers who were probably too high to even notice! For those with the munchies, three separate caterers were offering everything from Lydia’s vegan cuisine, to pizzas and barbecued ribs.

Knowing from personal experience how difficult it is to run a cannabis business in this climate of uncertainty, I can’t imagine the challenges facing Flow Kana. How can one make a budget when the regulations change very month? How can a distributor promise a price to the farmer in a wildly fluctuating market? Everyone says, “if you can just hang in there for the next few years, you’ll make it over the hump.” The hump may be huge, but working together is how we will surmount it. Having some fun parties interspersed helps a lot too. This was a Launch to remember, and a turning point in cannabis being accepted into the community. Bravo Flow Kana!