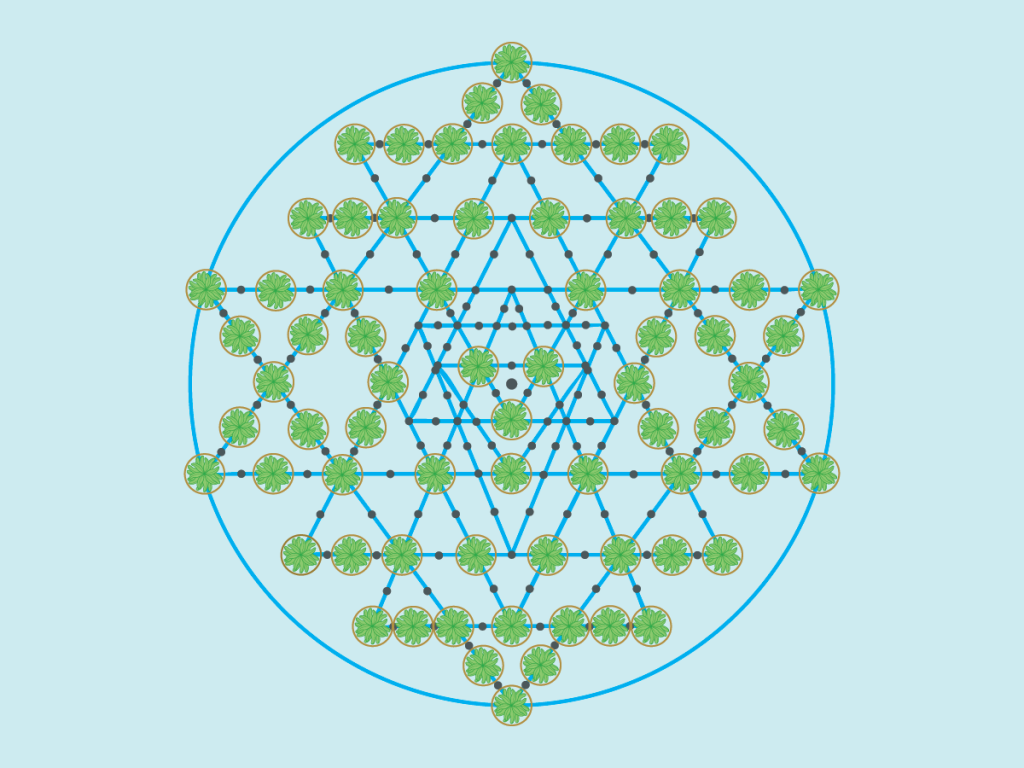 As Gene, a local guy with an excavator, was digging the holes for the new garden the other day, Super Bowl Sunday it was, I went out to check on his progress. It seems he found the Sri Yantra design of the garden a nice challenge, because he had already dug maybe five or six holes and had spread the dirt in a circumference or donut ring around each one. Most of the holes are on the power points at the intersections of the Yantra, while the others mark the lines of the triangles.

Looking down at the “material”, I was blown away. It was incredibly rich and brown, rather homogenous in texture with no rocks.  NO ROCKS!! I literally fell down on my knees in the soil and thanked the goddess Sri Mukambika for her blessing. This amazing soil lay beneath the meadow grasses, which I have been mowing yearly for about 10 years. I had no idea.

Peering down into the six foot diameter holes, one could see at least ten inches of top dark soil before it changed to a lighter color. Many holes were quite light at the bottom, which might mean they contains clay.

This can be a bit of a worry when watering, if the holes do not drain well. The roots could get water logged and begin to rot and do all sorts of other mean and nasty things. Luckily, a few days later we had quite a bit of rain and  it turned out that they all drain rather well. Previously we had filled  a few with about two to three inches of water with the hose and that also drained well. So it seems that drainage is not a problem. 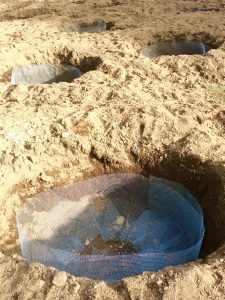 In the mean time we have been preparing for the next steps. First, each hole is lined with hardware cloth. We have both gophers and ground squirrels on our ranch to deal with. We are using the four foot wide variety with half inch holes in 100 foot rolls. With a grinder, we cut about 12 to 18 inches up at about 10” to 12” intervals.  We then bent the flanges up 90 degrees – when you unroll the wire in the hole the flanges cover the bottom. The gophers seem to be put off, at least so far, by the solar powered beepers that were spread around the garden. It remains to be seen if the squirrels can be kept out by the hardware cloth.

Meanwhile we had a two day blitz crew come in and gather up a huge pile of old dead and rotting branches and limbs from the various oak trees at the edge of the meadow. There is a huge pile of this wood next to the garden. Tomorrow it will be cut into 4 foot lengths and put into the bottom of each hole. A huge pile of oak leaves was also raked up and dragged in tarps to the garden edge. The leaves then go on top of the branches.

On top of the leaves goes a foot or so of the soil that we just dug out and then a layer of the old soil from the smart pots.  This will be mounded up to a degree yet to be determined. We are learning as we go along.

The soil tests from both the old smart pots and the meadow earth should be back from Timberleaf any day. We’ll see what amendments they recommend. In previous years some mycorrhizal would be added to the smart pots’ soil, perhaps some Bokashi, as well as some neem seed meal and other powdered amendments. But since a couple of soil samples will also be sent to Dirty Business, we’ll wait to see what they say about the micro-biological activity of the soil, before any drastic moves are undertaken.

Today we took delivery on the Synergy Ag Products compost tea brewer, so we are entering a whole new dimension of farming, moving away from dry powders. These still have their use, especially in getting the right mix and balance of minerals into the soil as one is building it up. Still, I am learning ways to move beyond that as well. Certainly the trees in the forest do not add powders to make the forest fertile.

To meet the Water Board’s requirements, a water meter will be installed to “precisely” monitor the daily consumption. It is not sure whether we will have enough money this year to put in a drip irrigation system. I really like hand watering and talking to each plant, although I do have to delegate the watering chore a good bit when I have a lot to do.

That’s where we are at with the garden. On the seed front, we have about all we need and they are now sitting on the lap or in front of Sri Ganja Ma, the goddess of Cannabis. 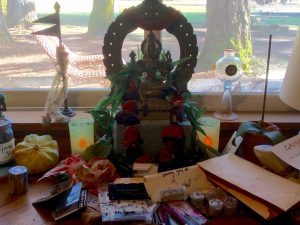 They are being charged up with spiritual, inspirational, healing and celebratory energy so that her devotees can receive the blessings of this divine plant. They will be ready to start sprouting March 8th, and so starts another season at Ganja Ma Gardens.