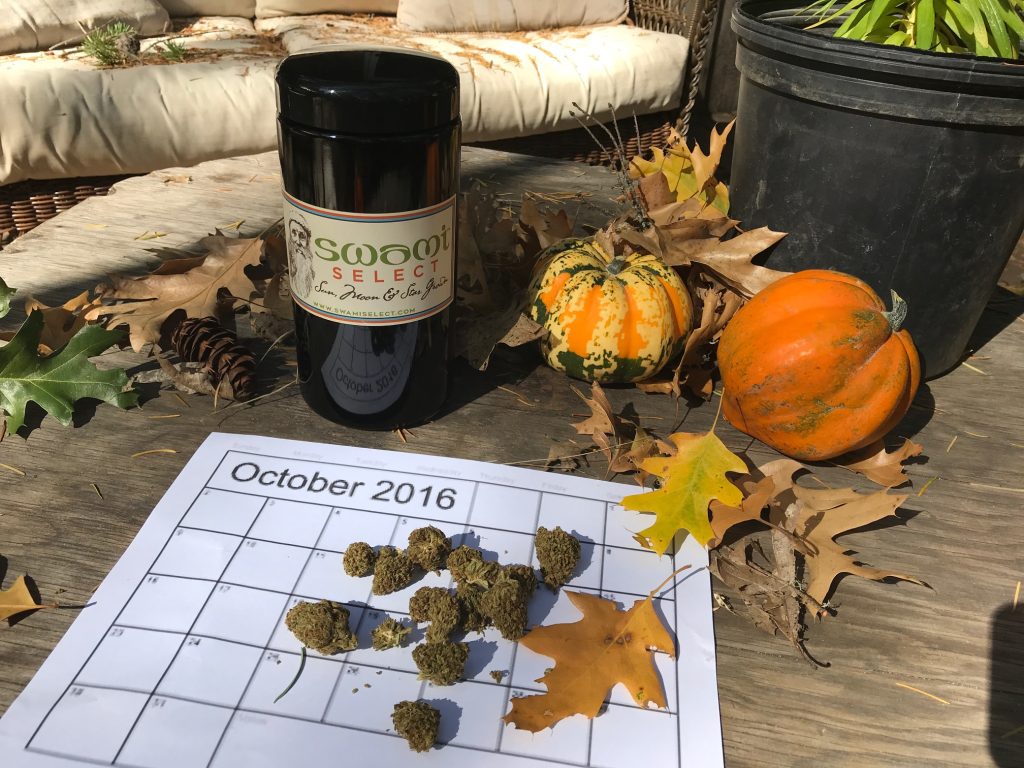 We recently received an e-mail from a man who said he had high hopes for the Swami Select “fresh flowers” he purchased at a dispensary, only to open the jar and find they were “aged”. Clearly this person knew their cannabis well, as his astute eye was able to discern that the flowers were about 11 months old. He admitted they still smelled decent but felt only the heavier terpenes remained, the mono terps were gone and he didn’t even want to bother smoking it.

Ultimately, it is on us because we had not specified to the dispensary owner that it was from last years’s harvest, not 2017 light dep. The budtender, unknowingly, had in fact told him they were “fresh” – but it made us think. It appears that many people who are into consuming sungrown cannabis rush to their local pot-shop towards the end of October to score the fresh green bud just in from the farms. That seems so odd. Like most growers, we are right now, 11 months later, really loving last year’s smoke. We don’t smoke or sell any of our flowers until the end of December after the harvest, and preferably not even that early. The cure is so important!

As Judges in The Emerald Cup for 13 years, we have had to smoke more than our share of uncured bud. Too much chlorophyll remains for the first couple of months to make a really smooth smoke. Cannabis is like fine wine in this respect: as long as it’s kept in a very controlled environment, it only gets better with age – up to a point. We’ve been doing our own research into that process over the past couple of years, and the results are encouraging.

It is said that CBN, which has been found to be more prevalent in aged cannabis, is less psychoactive than THC. In fact, it may reduce the feelings of anxiety that some people experience from cannabis with high levels of THC. The cannabis tends to be more relaxing and calming and perfect for a good night’s sleep. Yet it still gets you very high, trust us, we are smoking a joint of it right now! We will continue to smoke 2016 until late November, when we have to tune in to only smoking to Judge for The Cup. And after the Cup is over we will go back to 2016 harvest until we smoke up all of our “little bud”. By then the best of 2017 harvest will be just ready to smoke.

Over time, we have come to realize that there are three stages: drying, curing, aging.
Drying takes place in the barn in the dark with a semi-controlled environment. There is an exhaust fan and a dehumidifier, which we haven’t used yet this year because the outside humidity has been so low. Drying usually takes 10 days to two weeks. You know it’s ready if the small sticks and stems snap rather than bend. The plant or branch is taken down and bucked, then wrapped in clean brown paper. All the different stems then equalize their humidity, as we open the folded bags to “burp” them from time to time.

After several days, the brown paper bags are either taken in and their buds trimmed or put into black contractor bags and then into Rubbermaid tubs, which are stored on a cool dark place. After the flowers have been trimmed they are put into turkey oven bags, then back into contractor bags, tubs and storage until sold.

We live high in a Douglas Fir forest, with some of the oldest trees in Mendocino County, which condition the pure Pacific Ocean air blowing over the verdant mountains. This gives our flowers a special drying atmosphere and keeps the storage sheds cool. Curing and aging occur in this space. In our opinion and taste, flowers are cured enough to smoke about three-to-four months after harvest.

Over the years, however, we have found that an aging occurs after about six-to-seven months of storage. It is known that CBN increases, but THC and CBD are quite stable so they hardly degrade. Also, some of the more volatile terpenes off gas. What changes most is that the chlorophyll oxidizes and turns brown like the fall leaves. This happens in three stages. Some strains are just not ready to smoke until they are aged eight or nine months, when they finally achieve the proper balance.

If you compare tobacco, there are numerous steps of drying, curing, aging, fermenting and toasting, taking about three years from harvest before it is ready to smoke. Once rolled, packed and sealed, they are stamped with a “Best if Smoked Before” date, though I’m not sure the limit.

At harvest, it is said that there is a three-to-four day window when the flowers will be at their peak. Knowing the exact harvest day for each plant, the perfect drying time, the best curing and aging duration is more an art form than a science. We feel the premium smoking experience comes from flowers aged at least five months, sometimes longer.  If the flowers are kept in the proper storage conditions in the proper Miron glass containers, the quality will hold for at least a year if the container is left closed and, once opened, decanted into smaller jars.

To finish the story we started with, we offered the man who wanted fresh flowers to keep the aged 1/8th jar of cannabis he already purchased, and we will give him a new 1/8th of some fresh flowers later this fall. That way, he can be the judge. We all have our own tastes, some people like brandy and others like Beaujolais Nouveau. We can all be researchers together as we learn about this amazing plant.