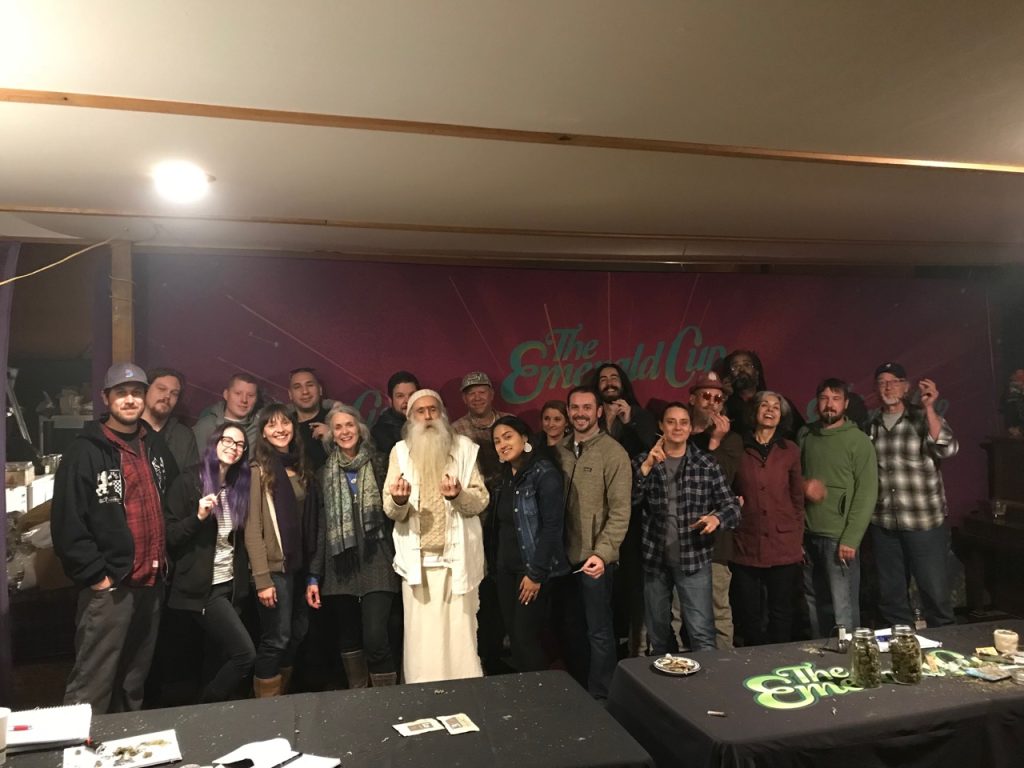 I know our articles typically post on Tuesdays, and it’s now just past midnight on Thursday, but we here at Swami Select have been busy. Nikki and I just finished testing our 15th joint since noon. You know what that means: Emerald Cup 2017 flower competition judging has begun.

On Monday afternoon, starting around 4:20, we had our first meeting of the Judges at Area 101 (the home of the Cup) just North of Laytonville. Though we’d been recruiting judges for months, this was the first time we were together. I lost track the number of entries sampled. Let’s just say it was a convivial gathering, getting to know one another as we smelled hundreds of jars of 2017’s finest sungrown. It is a great privilege to have the first stimulating scent of terpenes representative of our state.

In 2003 when the Emerald Cup launched, Nikki and I participated as judges. That year, there were only 23 entrants. Many did not write their name on the entry form. Several winners did not step forward to receive their prizes. Only 200 or sopeople dared to gather, celebrate and “smoke dope” in a funky building right on Highway 101. The judges rolled up joints from the top three winners and passed them out to the audience. Everybody got righteously stoned and high dancing to the music. It was amazing.

Over the years the contest has grown and grown, more or less doubling every year until it now fills the entire Sonoma County Fairgrounds with more that 25,000 attendees. There are over 1,000 entries in 15 categories, each with its own judging panel. During the event’s expansion, some judges have moved on while others have returned. This year, the mix of knowledgeable newcomers and respected veterans from different California counties leaves me inspired. 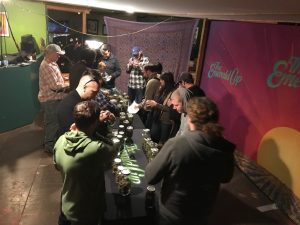 Our Monday meeting was the first step in the process of winnowing out weaker entrants. Through testing for mold, mildew and pesticides, some entries had already been eliminated. Now, we valued entries on “look” and “fragrance.” Area 101’s long, communal table in the big main room at was packed with jars, each individually tagged  and containing two ounces of bud. The group crowded around the table, opening jars, taking deep inhalations and gently fishing out nuggets to examine them closely. Analysis of flower focuses on trim, sparkle, shape, firmness, dry/moist range and stickiness. In this first round, if a flower has a shaggy trim, is too soggy or too brittle or has lost its terpenes heads, it is likely eliminated.

To evaluate fragrance, Judges pinch buds and inhale deeply. In the last few years, we have all learned so much about how terpenes influence cannabis’s entourage effect, promoting different types of healing depending on the terpene just as different cannabinoids support different parts of the endocannabinoid system. Fragrance-less samples, needless to say, don’t pass.

Many of the younger judges who are growers now try and guess the strain and lineage. If any judge deems it an inferior product he or she will turn the jar upside down on the table. Another judge may come along and decide that it is not that bad, but then another will turn it upside down again. This back and forth goes on for a while until a sort of consensus is arrived at and the sample either goes to the “Pass Table” or the “Fail Table.” Judges then review and re-smell and sometimes re-smoke the samples on both tables, giving everything one more chance, until rejects and finalists are decided. This is kind of a fail safe so that no worthy entrant is overlooked.

All of the entries that make it through this weeding out process get portioned into tiny one gram containers, each numbered and catalogued. The judging panel is divided into three teams of five and each judge on the sub-panel takes home about one third of the samples to really focus in on at home. While the judges wait around for their bags of samples we smoke a bunch more and talk cannabis.

Tomorrow, another set of samples will be culled and distributed to the judges after all the test results come back from the SC Labs in Santa Cruz. On Saturday each judge will come back to Area 101 with their Top 20 from all their samples. Then each sub-panel will tabulate their integrated Top 20 and narrow it down to a collective Top 50 semi-finalists.

On the Wednesday before The Cup, each Judge will bring their final Top 20 and these lists will be intercalated on a spread sheet to arrive at the winners. Often there are numerical tie scores necessitating a smoke off whereby a joint of each is rolled and each judge gets to hit on each and state their preference. It is a complex, time consuming and in many ways exhausting process, which involves getting really stoned every day for two weeks. I am always impressed with how serious, passionate and dedicated the Judges are, how much we all love the Sacred Herb. It is a great honor to be chosen to be a Judge for the Emerald Cup.