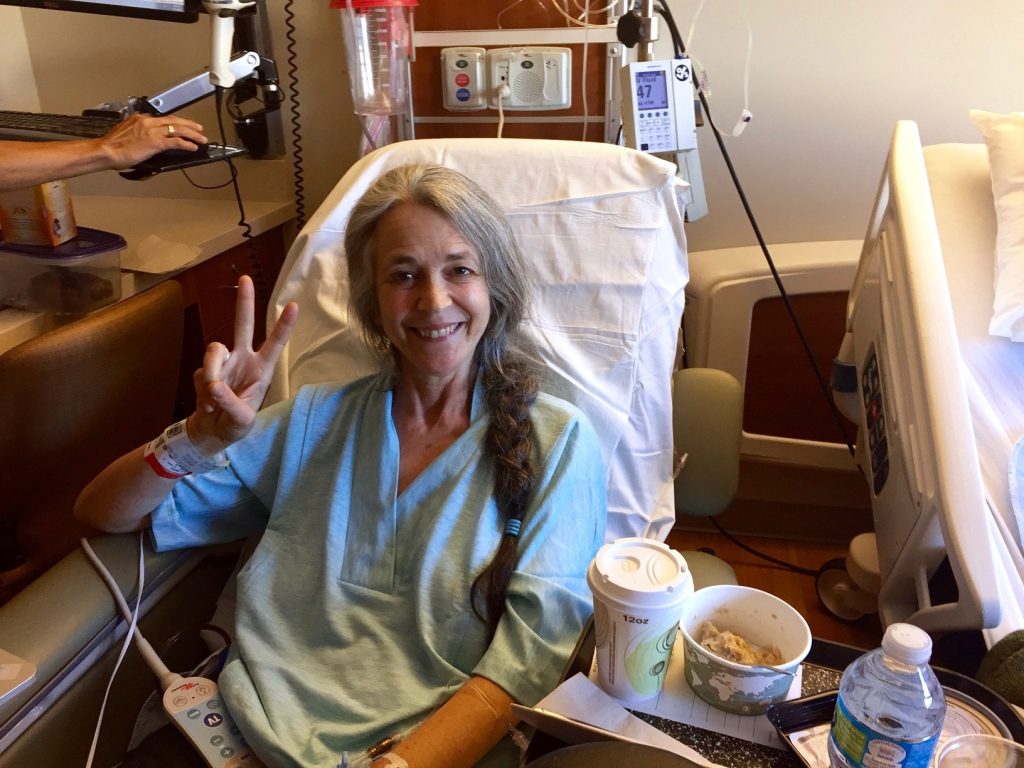 OK, the deed is done. I am officially bionic now, with a new titanium and ceramic hip and ball joint implanted on my right side. Slowly, slowly I am learning to walk again as I exercise several times a day to get it lubricated and into action. It really is a miracle – they had me up the evening of the operation to go to the bathroom, using just a walker. At that point, six days ago now, I was still woozy from the anesthesia. Also, I knew they’d given me a small dose of Oxycontin pre-surgery to calm me down. I was assured that it was standard practice and the only opiate I would have to take.

The nausea was horrid and wasn’t going away, so I was given two separate types of anti-nausea medication plus an ear patch. Nothing was working, so once I was back in my body enough to get out my cannabis goodies basket, I took some Bhutan CBD drops and nausea-be-gone. The kind nurses simply said, “just don’t tell me you are taking that” while they observed the instant relief with true curiosity. By week’s end, I believe I had converted some to the wonders of cannabis as a medicine – who wants to bring relief to others more than a nurse?

I slept like a baby on a dropper-full of the Hummingbird Lane high THC Blue Dream drops. Of course I was all hooked up to an IV, which was giving me occasional Tylenol doses. I felt that was OK as Tylenol is not an opiate and administered via IV isn’t so harsh on your guts. Later that night, while in deep sleep, first someone came in to hook me up to the IV and also give me a few pills which they called “the doctor’s special cocktail”. In my hazy state of mind, I asked what it all was and was assured they were anti-inflammatories and supplements. Or that is what I heard them say, but I keep asking several times over my stay, just to make sure no opiates were involved.

During the operation the doctor had injected the entire hip area with a very strong numbing agent called Bupivacaine (also known as Marcaine) which I was told would last for up to 2-½ days. So I must admit, other than the nausea which returned the next day, along with my head still foggy from the operation, I was in very little pain. I did some MJ4X from Bhutan (basically Rick Simpson oil purely made with all organic product) and felt pretty darn good. 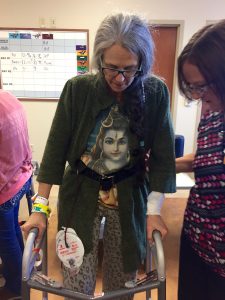 I was part of the weekly group at the hospital who either had knee or hip replacements on the same Monday. I observed our progress and it sure seemed like I was moving a bit smoother than the others at Physical Therapy classes. I always took a dose of some sort of cannabis tincture just before the session. I was told by a nurse that some of the other patients were actually requesting more opiates, and that made me sad as I know it slows down the healing process. Clearly, other than the darn nausea which caused me to loose most meals, I was not feeling much pain at all. They told me I had become anemic due to not being able to keep down my food, so no wonder I felt spaced out, right?

Each night I was awakened every two hours or so for another IV injection, to take more pills, or to have my blood drawn to keep an eye on the anemia. I must admit, the vampire thing in the middle of the night was a bit freaky. The last night of my stay there, when the nurse came n around 5am and asked me to take the pills, I remember asking her why, because I had absolutely no pain. But she insisted, and in my sleepy fog I gave in and flushed them into my body with a glass of water. It was the next morning, when again I felt so nauseous, that I had a realization: I was taking all those pills in the doctor’s “cocktail” on an empty stomach – no wonder I felt so horrible. So I called my dear friend Adrienne, a retired doctor from San Francisco, who had so compassionately stayed with me in hospital the first two nights I was there. I asked her about it and she suggested I get all the info of what is in the cocktail and let her know. That was when I discovered they had me on a light opiate the whole time: Tramadol, prescribed every four hours while I was there. Plus they wanted to send me home with a big bottle of it. It isn’t the strongest opiate, but certainly enough to make me feel horrible the whole time, when I have no doubt I could have done it all with only cannabis for pain and inflammation.

When they tried to give me one more cocktail before discharge that day, I flatly refused. The stuff was in my system and I had shake it off. Along with the Tramadol, I discovered I was being fed Gabapentin which is primarily for seizures. It is not a narcotic, but can have some strong side effects. I have yet to hear of any drug that is more beneficial to victims of seizures than cannabis – so why did I need the Gabapentin?

Naturally, as I was discharged with fond farewells to the wonderful staff of nurses and physical therapists, I was upset that my cannabis test had been foiled by the requirements of Western medicine. I had asked my doctor very specifically for no opiates post-surgery, and he assured me that if I told the nurses I was using cannabis and brought my own, it would be fine. Yet the nurses take the doctors orders, and hence the daily cocktails. I felt betrayed.

But that feeling was nothing as bad as the withdrawal I experienced for 36 hours when I awoke the next morning at my friend’s house where I am recuperating. Chills, hot flashes, thick brain fog, emotional outbursts, and an uneasy feeling all over my tense body. I literally wanted to crawl out of my skin. Good news was the wound looked like it was healing very well, so this had nothing to do with infection, etc. I was coming down, had no serotonin, and was fighting it.

Well, thanks to cannabis once again, I am now back in my body and brain. Best of all, I actually feel a twinge of pain occasionally, which means I am very much alive. I have to wonder if people have become such pampered woosies that any idea of pain is not acceptable. I’ve lived a full life, with lots of cuts and scrapes involved, which has always taught me that pain is part of the package. I can handle regular honest body pain much better than the pain of withdrawal from opiates any time.

Thanks to all my beloved family and friends who have helped me get through this, and thanks to the excellent staff of nurses and PT folks at the hospital, as they are just the messengers. Thanks to cannabis, my lifelong ally, and thanks for this miracle of a new hip and the wise doctor who knew just how to get it in there right. I do not thank the opiates, yet I do respect them and know they have their place with people who really need them.

Onwards, one step at a time. Cannabis is now my only guide and I have no doubt the path will be easy and kind.