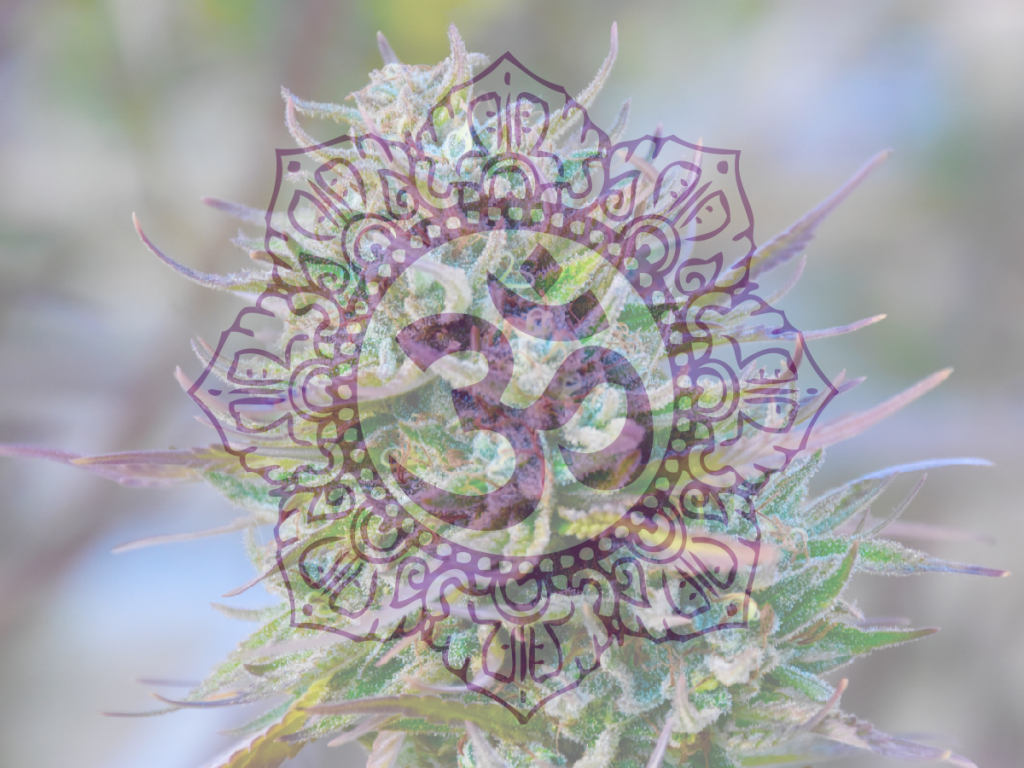 There are many ways in which the ingestion of cannabis alters one’s perceptions as it heightens sensory awareness. The obvious examples are food tastes better, music sounds better, dancing and yogasanas become freer, and so on.

There is a deeper level yet, in which cannabis demonstrates that consciousness permeates all matter. Ganja Ma {the Goddess of Cannabis} showed me this one year as I was sprouting seeds for the coming season.

As described in an earlier journal post, the chosen seeds first spend a moon cycle at the foot of the Goddess. Then the seeds are put on dampened unbleached filter papering a black sprouting tray, labeled, and covered with more damp filter paper. A plastic hood is placed over the tray, whereupon it is placed near a window. The first time I did this, however, after 10 days the seeds had still not sprouted.

Just then I noticed that Nikki’s pea and alfalfa sprouts, started at the same time, were already long and bushy. What up? The difference was that she had covered the sprouting jar with a heavy bath towel. So I covered the plastic hood with a dark bath towel and, low and behold, the seeds all sprouted in three days.

This got me thinking. What does the seed need to know before it will sprout? How conscious is the seed itself? It needs darkness, but not too much darkness, so that it has the illusion that it is about one half inch tucked into the soil. It needs warmth, but again not too much. It needs water in just the right amount. It needs to bear witness to the diurnal light and dark cycle.

Here’s this tiny seed that is going to produce incredible amounts of bio-mass that is already conscious of its environment, because if it is missing any one of the above four needs it will not start. Within the seed there must be four sensory receptors: one for heat, one for moisture, one for darkness and one for the diurnal change (which might be the same). In addition, there has to be some “awareness center” inside, that registers the presence of the necessary conditions. Once these conditions have been sensed, this “organ” then decides to launch the sprouting process. If any one element is lacking, the process doesn’t start or aborts later. In other words, the seed itself has sensory awareness and decision making power.

Once the cannabis Goddess revealed this to me it became obvious that all seeds must have the same sensory and decision making capacity contained in their encapsulated vitality. Some archeologists have speculated that it was cannabis indeed that inspired the human species to take up agriculture. Sprouting seeds demonstrated the source of the magic herb, prompting people to carry the seeds on migration, so as to always have the precious medicine and divine inspiration at hand.

Clearly, humans have a special bond with this plant. Evidence of its medicinal, practical and ritual use dates back at least 10,000 years. Recently it was discovered that humans have endocannabinoids throughout our bodies. As Michael Pollan pointed out in his book The Botany of Desire, cannabis has trained humans to give it the best of care, feeding and watering with love and attention, creating a symbiotic relationship.

There is an even deeper or higher level of cannabis’ consciousness raising abilities. Of late there have be several books published which seek to demonstrate the contention that many, if not most of the world’s religions have been inspired by potent doses of cannabis oils, elixirs and clouds of smoke. Presumably the founders and acolytes of the various creeds became “God intoxicated” through the ingestion of entheogenic substances, primarily cannabis based preparations such as Bhang, Soma, Haoma, Holy Anointing Oil and others.

I must say, I find these arguments quite convincing, but that will have be the subject of a whole separate blog post. Meanwhile, enjoy the consciousness raising qualities of your daily cannabis quotient.