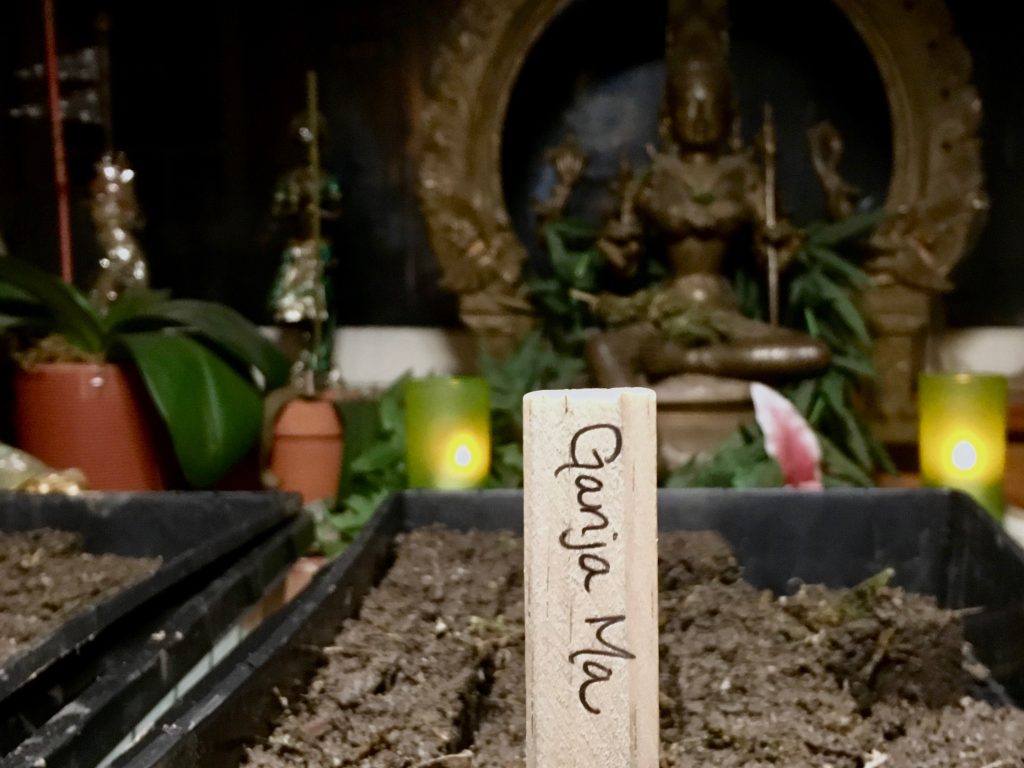 Those of you who may have read this blog over time will begin to realize I change the way I do things rather frequently. The biggest change, of course, has been my slowly dawning realization of the critical importance of living soil.

I have also changed the way I sprout the seeds. We’ve switched from packaged organic fertilizer to home-brewed compost teas, tried different trellising materials, experimented with various harvesting and drying methods – and that’s only the “big” changes.

This is one of the most exciting things about growing Cannabis. There are always ways to do it better; to go beyond organic to biologic and on to regenerative agriculture. You also get to do it over again next year. Last year’s crisis or mistake, whether caused by Mother Nature or self inflicted, will not be this year’s. One becomes a better grower by making mistakes and solving the problem or dealing with the threat and saving the crop.

So this year we have already had our first lesson in cannabis consciousness. Every springtime there is both expectation and anxiety around the sprouting of the seeds. What strains to grow, how many of each, when to start, how to do it? are the main questions. Some people always start on Valentine’s Day, others March First, or the Twenty-first, Spring Equinox. A friend who spent long years in India began his plants on Shiva Ratri, the night before New Moon in Feb/March.

Even for those planting by the moon cycle there are differing opinions as to the absolute most propitious moment. Generally, it is thought that planting should occur when the moon is Waxing and it is in a Water or Earth sign, known as fertile signs. Some break this down even further, saying that with plants whose flowers are used, planting with moon in Libra is best. Even though Virgo is an earth sign, it is not advised because a virgin cannot bear fruit.

After much research and discussion it was determined that February 27th was the best day to start based on the waxing moon in Pisces. With the weeks of heavy rain preventing any garden work, all of a sudden we were rushed getting the soil ready, mixing in the last ingredients late in the afternoon. We had until 8:56 pm to get in the seeds, so the push was on.

Once again, I was trying a new method, hoping to improve results. In the past I have sprouted using unbleached coffee filters in trays with plastic hoods covered in dark towels near an east facing window. This works quite well for the sprouting, but one has to be very careful of the tender white root tails that crack the seed. This is the tap root and is vulnerable and fragile. If these roots get too long (much more than one half inch) they are easily damaged when transplanting into soil. So even though I would get 95% sprouting rate, many would not survive transition to soil or be stunted because of tap root damage.

Years ago, at various times, I started seeds directly in the soil, with differing results. This year, as I wrote last week, it was decided to use a new tool to make little blocks of soil and plant directly into them. The cubes were then put in trays and set in the east window. Planting day was dry and party cloudy, but the next day was rainy, cold and grey. Within two days it had turned into a full fledged snow storm, dumping about 10 inches of snow in our meadow.

As far as I can figure out, the seeds sensed this and decided that there was no way they were going to come out in that weather. After four, then five days, none had peeked out of the soil. Apprehension grew apace. What’s happening? Why’s it not happening.

Finally, after many anxious days, it was realized that this batch was just not going to make it. Fortunately, we had not blown the whole seed stock; there are still plenty more seeds. But now trouble shooting is in order. Here’s where the grower earns their stripes. Possibly the soil was too compacted in the fancy new device we tried (admittedly with out a trial run). Quite likely, it has too much clay and needs more organic matter to improve “fluff” and allow for root expansion and air flow. We probably should have used a “Grow Light” sooner, to compensate for the dark grey days, or maybe we should have put the heating pads under sooner, but the trays were in a warm room and it had always worked in the past.

In the end, insight came from some women growers. One of whom has been growing cannabis up here for 35 years, said she wouldn’t start until March 21st, not until it really looked like spring was happening. Others too maintained that it had been too cold and dark and that the plants sensed that, so wouldn’t sprout into a hostile climate. It was further noted that if the “girls” get in the ground by mid-June, they “catch up”, or produce a similar yield.

Here again, cannabis is the great teacher. We had gotten this idea fixed in our heads that the seeds absolutely had to be started by 8:56 pm on February 27th. So we rushed around, but weren’t really quite ready. The seeds, on the other hand, had a mind of their own and just said, “Unh Uh, we ain’t sproutin’”. We were so fixated by our astrological Concept that we didn’t take Mother Nature into account. When you don’t do that, She makes you pay. Perhaps if we had read the Almanac’s weather predictions we might not have been so hasty to start with the worst storm in at least seven winters on its way.

I am sure every grower has lost his or her seed starts in any one of numerous different scenarios. One friend had all her tiny 3 inch high starts eaten by mice, another had theirs freeze one night, another lost out to the deer. The question is: How do you bounce back? We are going back to the unbleached paper method, but will also continue to experiment with the soil blocks and also with loose soil spread in trays. We’ll put the grow light and the heat pads on right from the start. And we will pray to the Goddess of Cannabis to bless us with a potent and bountiful crop.