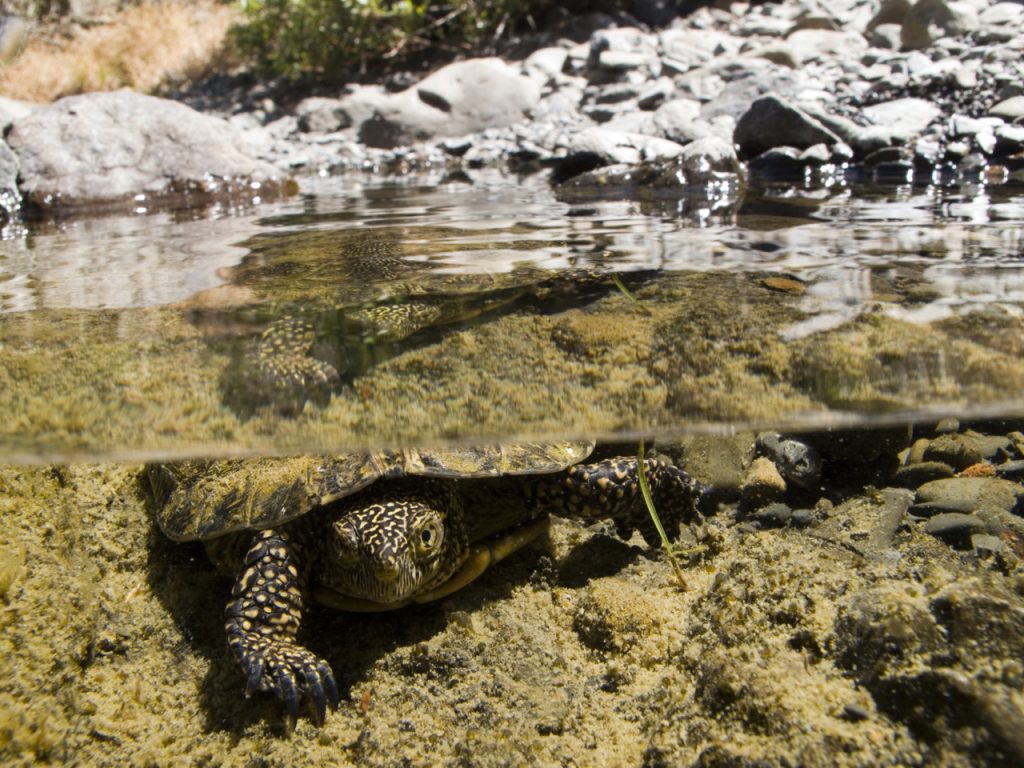 One of the many wild box turtles that also call our land home, as photographed by Milos Vlaski.

As I read the proposal, I grew frustratingly disappointed. It seemed like the final blow, the coup de grâce of our death by thousand slices. Now a to be determined percentage of growers must find new water sources.

SWB’s regulations will soon be felt in the market, too. After all, as we move toward 2018’s new world of “legal”cannabis, a key issue will be access to pesticide-free cannabis products grown using organic methods. To me, the Emerald Triangle has always seemed like the best place to grow clean herb. Northern California’s fresh air, water and soil is some of the cleanest in the continental US. Plus, it’s widely agreed that California’s Central Valley agricultural lands have suffered under years industrial petro-chemicals based agriculture. It’s already having a negative affect on cannabis cultivators setting up shop there. Without mountain grown cannabis, there will be a severe shortage of legal permitted testing lab certified cannabis for sale in the spring of 2018.

Before I went into a polemic of outrage, I researched California’s water-related history. Wow! Do hings get controversial quick! Sungrown cultivators are small potatoes compared to California’s historic and ongoing water wars.

In the ‘40s, for example, lawmakers proposed that, by diverting water from Sacramento River, they could provide an endless water source to SoCall’s swimming pools and golf courses. It was to be called the Peripheral Canal. Sound familiar? Even today, Gov. Jerry Brown wants to build that canal to send more water south.

Thanks to intense droughts in the 70’s, 80’s, 90’s and over the last five years, California’s leadership has developed a tracking system to manage the state’s water sources and their related uses. Since, legally, all water belongs to the state and, beyond that, the US Federal Government considers itself owner of all water flowing into navigable rivers and oceans, I wonder, who has rights to use the limited runoff supply?

In knowing history, we may divine our future. The original water rights granted to the Californios, the original Spanish and Mexican settlers in the State, were riparian rights; that is rights to the water of the river running through or bordering one’s property. Here the rights of the downstream users were protected by limiting the amount of flow each rancher could capture.

Then, during the Gold Rush, miners needed more  water in places far removed from streams and rivers. They claimed water rights on the basis of “first claimed, first right”, which are called Appropriative Water Rights. These two practices were clearly in conflict. Even today, these ideas compete.

In an effort to clarify, state regulators established principles like “Reasonable Use,” “Non-Wasteful Use” and “Beneficial Use.” They considered the value of the water’s usage. That, in the end, is a matter of interpretation. The also considered the value of preserving natural water sources for to good of society and the preservation of the environment and the fish and wildlife living there.

When you consider cannabis cultivation in the context of societal and environmental justice, you see the needs of cannabis cultivators must be thoughtfully integrated into the state’s total water resource allocation.

This may prove difficult when you consider California’s water history. First, it’s curious that the total amount of water allocated by permit and license measures five times the actual annual runoff produced. How can that be? Well, all the water allocated is not all used, but still there is something else amiss. You see, because of insufficient funding and staffing shortages, the state’s system cannot effectively monitor available water or its use.

Second, water rights secured prior to 1914, nearly half of all the water used in the state, are uncatalogued and unregulated. This creates a situation where the last one in gets the least water and is first to be cut off. Since Cannabis farmers are the “last ones in,” we receive the strictest rules.

To close, as the formerly outlaw cannabis community becomes legally integrated into the economic and environmental realities of California, we must insist regulations that are fair and equable,keeping in mind that Cannabis is a highly beneficial contributor to the well being of California’s citizens and economy. We also need to agree to be good partners in caring for the environment, a value we’ve long here on our farm.

If you want to read more about this fascinating and complex issue check out these links: