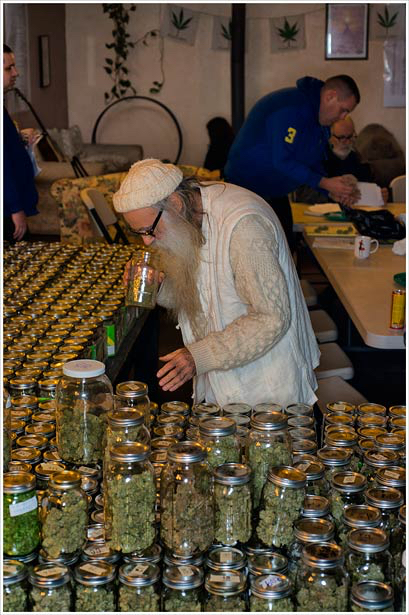 Over the last 50 years, thanks to scientific achievements made in the field of cannabis research, the language we use to discuss our favorite plant has undergone a revealing transformation. In the ’60s and ’70s, my generation referred to it as grass, pot, weed, herb, sinsemillia, and, of course, marijuana. When it came to strain identification, names of origin did the trick: Michoacan, Acapulco Gold, Panama Red, Colombian, Hawaiian, Thai sticks, home grown, Mendo, Humboldt. The same was true for hash: Afghani, Nepali, Lebanese, Moroccan, Manali, Kulu Valley, Parvati Valley and Bombay Black. Still, no one said “cannabis.”

The first time I really heard the word was in Mia’s Cannabis Shop in Amsterdam, where I was scolded for using slang for sacred medicine. Somewhat taken aback, since I considered myself a certified pot head, Mia handed me a microscope through which the magical world of trichomes was revealed. Trichomes, another newly utilized word, whose importance would become clear to me only years later when I became a grower and Judge in the Emerald Cup.

Cannabis language got more scientific starting in the ’70s thanks to Dr. Raphael Mechoulam and his team of Israeli researchers who first isolated THC and endo-cannabinoids, anandamide and 2-AG, then CBD . The only word, however, that made it immediately into the common lexicon was delta 9 Tetrahydracannabinol, or THC.

Let’s not forget about another word: terpenes or, as the kids say, “terps.” The subject of major scientific research for decades, we have now come to understand the flavorful, healthful role terpenes play. Many folks use words like “fuel” or “fruit” to distinguish the flavor (or terpene) profile of their product. In fact, scientists believe there may be over a thousand different terpenes produced in the plant world. These little gems have many powerful qualities, such as anti-fungal and anti-viral attributes, which plants of all varietals produce to protect themselves from pathogens. The terpenes emanating from a beautifully cured flower give one a pre-cognition of the effect soon to be felt. Like when one peels an orange, the pungent aroma announces to the body what the effect of eating the orange. The body’s own internal molecular memory recollects how that smell and taste made one feel before.

Scientists have concluded that the only true indicator of the effects that a particular phenotype of cannabis will have is through extensive profiling of both the cannabinoid and the terpene content of that plant. This comes with “lab testing,” another new, important phrase in the growing cannabis canon. Not only does testing promote safety, it also helps us understand the medicinal quality a particular strain may have. In fact, since we began judging the Emerald Cup, the winning flower has never had the highest THC. Instead, the winner has always been the strain with the most intriguing and potent fragrance (that is terpene content)  along with a high THC and, sometimes, a heightened level of CBD. The powerful terpenes in cannabis work hand in hand with the cannabinoids to create the total effect.

The word “entourage” refers to the complementary relationship that all of the over 400 different compounds in cannabis have with each other, some augmenting the power of certain cannabinoids and some restraining the action. With so many active compounds, each strain, not to say each plant when started from seeds, has a unique ratio. They are sisters after all. Eventually, through extensive testing and controlled experiments we may be able to pin-point the exact ratios in the entourage which are indicated for every medical condition.

The evolution in the terminology of cannabis demonstrates the changing public awareness of this once maligned herb, and is an indication of growing cannaisseurship. The only way to have any idea about what effect that joint or concentrate or edible will have on one is to read the cannabinoid and terpene profile of that product. Saying a plant is “Indica” or “Sativa” does not really give you much information. Be sure to ask at your favorite dispensary what the terpene count is of your cannabis to help determine the effects you will experience. Knowledge is your key to finding the right medicine.