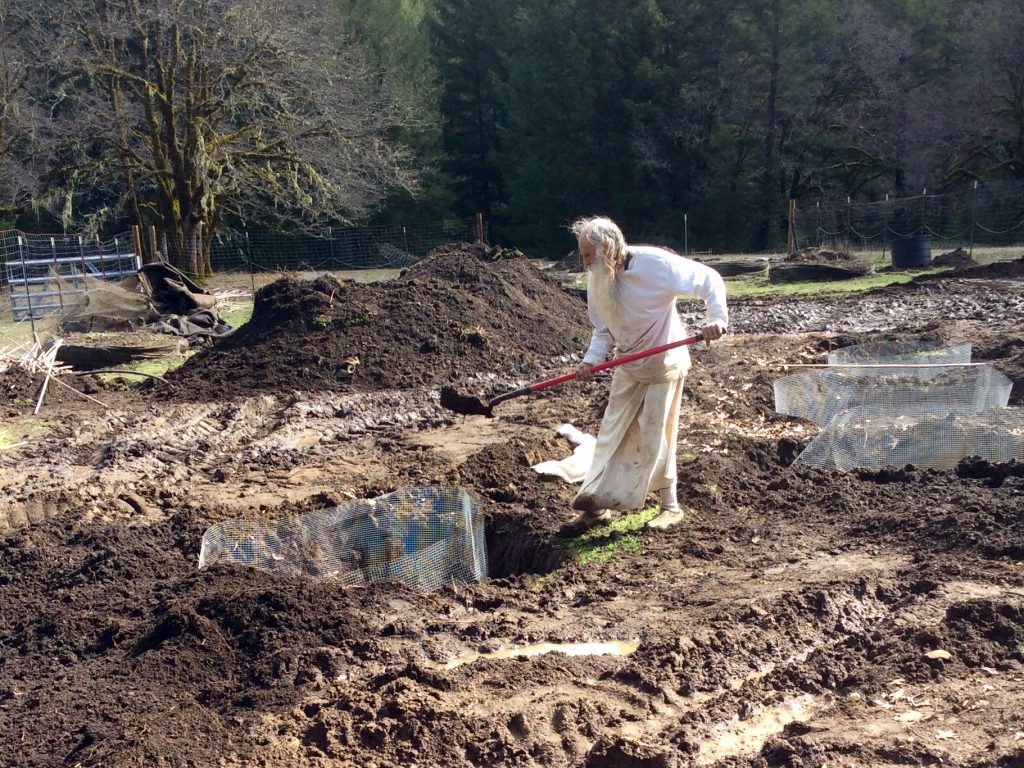 The new garden is taking shape. A few holes (which will become garden beds) had to be moved and a few new ones dug so that the Sri Yantra design layout lined up better and we got to the desired 72 holes. Of course, the whole county is waiting to find out how many plants the Board of Supervisors will deign to allow us.

The hardware cloth cages are all in, as well as the oak branches and leaves. This was topped off with meadow soil so that when the beneficial nematodes arrive they will have a substrate to live in as they keep termites and other potential pests lurking in soil or wood at bay.

Meanwhile, while we are waiting for Mike Lewis to help us set up the Synergy Brewer. Cassie and some other helpers are brewing a small bacterial compost tea for now, using worm castings, organic brown sugar and kitchen compost in a 55 gallon drum with a hose bib on the bottom and a small fish tank air bubbler. This will be used to inoculate the charcoal that I have filtered out of the ashes taken from the various wood stoves. Once inoculated it becomes Biochar, which holds moisture like a sponge and creates a climate of living bacteria in its pores, activating the soil. It will then be mixed in as we add each layer of soil to the holes.

In addition, we are making our own IMO’s, which are Indigenous Micro Organisms. After cooking a bunch of rice and letting it dry over night, it is put in wooden or basket containers then buried in the duff under healthy trees. After several days one’s local indigenous mycelia will grow on the rice like white lace. This is then mixed with brown sugar and water and fermented in a gallon jar. After about ten days the liquid is filtered out and saved.

To make bokashi with the IMO’s from one’s own land, and mix that in the soil, makes the growing medium that much more a unique terroir. Looking for an organic medium for the bokashi took some effort, but the local Laytonville Feed Store procured some organic barley bran for the base or substrate. To this are added the IMO’s along with Apple Cider Vinegar (Bragg’s is best), unsulphured molasses and water. Turn and stir it all to a uniform dampness, put in an air tight container and let it sit for 10 days to two weeks. When done it smells a bit like sourkraut.

Bokashi is added along with the biochar and mycorrhizae as the meadow soil is layered into the holes. This, in addition to the compost teas to come, will create a living beneficial microbial and bacterial environment in the earth in which the plants will thrive as the nutrients are made readily available. These vibrant and benevolent entities also keep out those which are detrimental to plant health. Biochar can also be added to the compost pile. It accelerates the breakdown of the organic matter into sweet smelling compost.

Next, I have to send another soil sample to a different testing company to get a readout on the Active and Total Bacteria, Active and Total Fungi, and Protozoa. With this information, we will have a better idea exactly which compost teas will be needed to balance the soil and improve its fertility and water efficiency. All these beneficial micro organisms are also the first line of defense against pests and diseases.

Now we just have to wait for this delightful rain to let up for a moment so we can get back out into the Garden.