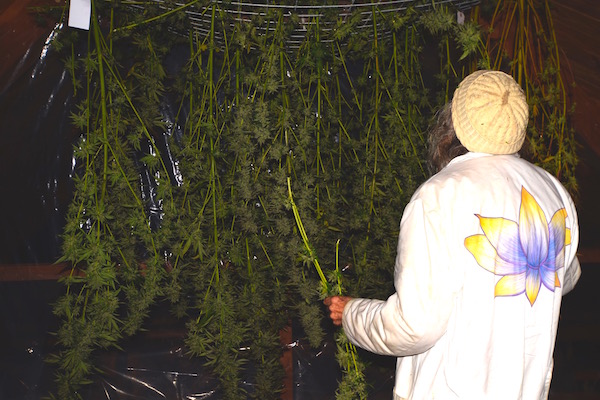 The Perfect Cure: What We’ve Learned About the Cannabis Harvest from Decades of Experience

Nikki and Swami share tips for one of the most vital steps to ensure a good cannabis harvest: the cure. As they say, “The key to a good cure is to be kind to your girls!”

This piece was originally published on MERRY JANE on November 14, 2017. 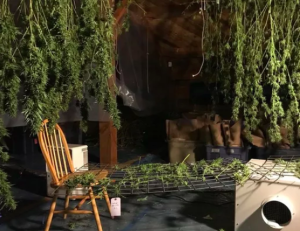 Crafting the perfect cannabis flower is a demanding process from seed to sale, and the drying and curing stages are critical aspects. Far too many farmers work hard all summer in their garde ns, only to blow it during these vital steps. Many harvest too early; others too late. The master growers, however, know exactly how to pamper their buds from the time they are cut until they are packaged and ready for enjoyment.

Back in the earlier days of the Emerald Triangle, when hiding from the cops and growing under manzanita bushes was the norm, you could sell marijuana for $4000 a pound. During the curing process, residents hung plants under canopies or plastic carports, and everyone prayed that the rainy season would hold off for a while. When it didn’t — which was more often than not — weed would be trimmed and sent off to market before it was properly dried. I remember one instance of a farmer leaving open grocery bags filled with pounds of pot on the back seat of his car to finish drying as he drove them to the dealer. The demand was high; people were happy to pay lots of money for whatever they could get.

Things have changed in the decades since, and you can apparently teach an old farmer new tricks, as we’ve all learned over time what helps and hinders the drying process, known in the business as ‘curing.’ For example, never try to rush the drying process by using excessive heat — it will greatly diminish the quality of your bud. Never put your flower away in plastic bags unless you’re certain it’s fully dried, or you may open it up later to find a moldy mushy mess. Every year, we try to use less plastic in the harvesting process in order to create less landfill.

Years ago, a longtime grower friend taught us the secret of using unbleached Kraft paper to wrap the cannabis when it comes down from drying. We buy it by the roll and make tall cones to hold the bucked branches. After a few days in the cone, when the flowers are feeling dry enough, we’ll close up the top and continue to let it dry a few more days. A skilled farmer can tell when the level of humidity in the bag is just right with just his or her fingertips. At that point, the cannabis goes into big plastic tubs, carefully marked to separate strains and plants. 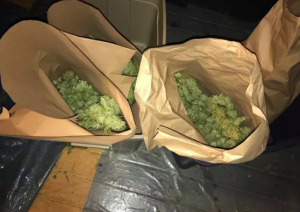 It doesn’t stop there, though. A burping schedule is recommended, which means popping open the tubs and bags every few days over a couple of weeks or so. When the stems are easy to snap, you know that the cannabis is fully dried. At this point, it’s ready to be trimmed and packaged. Traditionally, trimmed flower is put in turkey bags, which have been popular for years since they actually seal odor, making it best for transportation reasons. But now that we are entering this new era of legality, other options are available. On our farm, we choose to treat our girls like real princesses. In order to preserve the freshness of the plants, we gently place each bud into violet blue apothecary glass jars, which we seal tightly and then transport to the dispensary — not unlike how a vinter carefully bottles wine before distributing it. This offers consumers the assurance that no one else has touched the product since it left the farm.

The weather during harvest plays a key role during the curing process, too. If it’s rainy, you’d better have your dehumidifiers ready to go. If the weather is sunny, be sure it doesn’t crisp up your plants by drying them too fast. The humidity levels should be around 65, and fans are essential to keep the air flowing. It’s kind of like Goldilocks — you want the conditions in the dry shed just right…

In the old days, farmers used to do a “wet trim,” cutting all the leaves off the buds as soon as they were harvested. The theory was doing a good scissor trim before hanging them to dry would foster tighter buds, but it also means more handling of the plants. As Master Hashishin Frenchy Cannoli once explained to us, “It is all about keeping the trichomes intact.” To that end, we recommend a quick yellow or fan leaf plucking before hanging, while leaving some leaves on the plant to protect the precious buds while they dry.

Some farmers use a trim machine to save on labor expenses, but it shows in the final product. While serving as judges in the Emerald Cup, Swami and I can spot a machine trim job by eye — and believe me, these plants never win. Under a scope, it is easy to see how the tops of the trichomes have been literally knocked off, reducing potency of the bud. Treat your girls with care and respect and they will love you in return. Don’t scalp your daughters — pamper them!

Every farmer has their own techniques, developed after years of trial and error. There are a few of us even experimenting with curing, with certain farmers trying to “lay down” some jars of flower for upwards of nine months, and sometimes as long as a couple years, to see how aging affects the crops. So far, the aged cannabis we’ve tried is more mellow on the body, but still very stony. Typically, we prefer to not smoke our cannabis until after January — at the earliest — allowing it time to fully cure and come into its own. The key to a good cure is to be kind to your girls. Like Otis Redding said, “Try a little tenderness”… you will be rewarded.