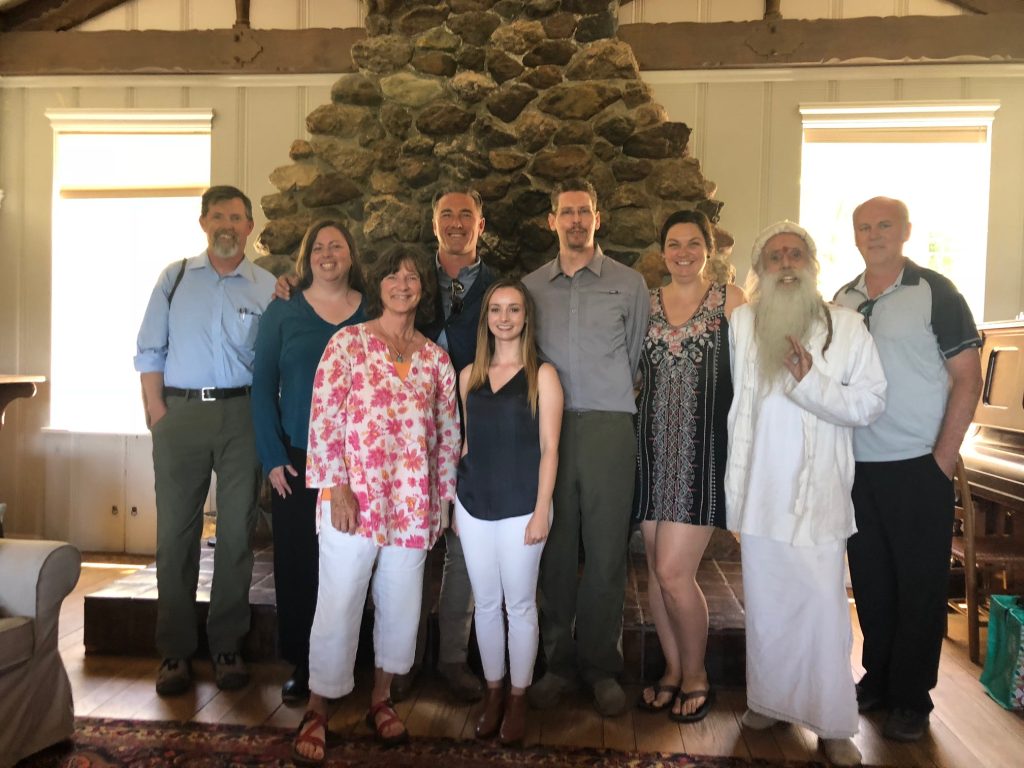 Last week, an exciting opportunity presented itself to the the Mendocino Appellations Project, on whose Board of Directors I proudly serve. The Environmental Projects Unit, a sub-committee of the California Department of Food and Agriculture’s CalCannabis program, reached out to MAP after we had sent them information, white papers, maps and brochures about the need for appellations of origin to safeguard the livelihood of the artisanal cannabis farmer and breeder. In previous posts, I have discussed Appellation and Terroir, affirming that appellation of origin control (AOC), if done properly, can heighten the chances of survival for the craft farmer who grows from seed using organic methods.

So far, the Environmental Projects Unit, which consists of four members with a wide range of skill sets, has been studying the history and use of appellations, geographic indicators (GI) and intellectual property rights (IP). IP rights were first formally created in Europe in the 1890’s. The committee is now in the process of visiting cannabis cultivators and breeders around the state. They have already visited farms in Southern California; this was their first visit to the North Coast region.

All the team members are new to the CDFA and new to cannabis. Unit Manager Keir Furey is an economist. Colin Coltrane is an environmental scientist and botanist. Francis Bean is a geologist. Haley Walters is an environmental scientist who previously worked in the California Department of Pesticide Regulation. All were quite personable and listened with intent to learn.

Genine Coleman, Executive Director of MAP, set up a tour showcasing two small craft cannabis farms in Redwood Valley just north of Ukiah as well as a work session the following day to drill into details. The great thing is, these folks came to see us, so that they could get a feel for the Emerald Triangle—we didn’t have to trudge up to Sacramento. The MAP team, in addition to Genine and myself, was composed of Board members Justin Calvino, co-founder of MAP, and Sara O’Donnell, long time community organizer, along with advisors, Hollie Hall, a water scientist, Eleanor Kuntz, a geneticist, Rachel Giraudo, Associate Professor of Anthropology, and Research Associate Kristen Garringer 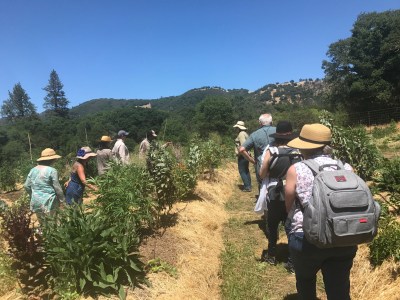 After a brief rendezvous at Yokayo Ranch outside of Ukiah, our caravan took a short drive through the golden brown rolling hills, scattered with oaks and manzanita bushes. and small farms settled on small pastures which characteristic of Redwood Valley. Soon we were walking between the “Hugel” beds built by Josh Khankhanian and Sandra Berman of Moon Gazer Farms. We were in the south end of Redwood  Valley, the part that had not burned in the intense fires of 2017.

I had seen the same garden about a year ago when they had first installed the beds. Though they had shrunk in height by about a foot, the beds were still substantial and clearly very fertile. All their female cannabis plants, the “girls,” started from seed, were in the ground looking green and perky. On the sides of the beds and in between the plants numerous vegetables, flowers and herbs thrived—tomatoes, squash, watermelon, borage, lavender, cucumber, carrots, mullein, comfrey. Pushing aside the reflective covering of  yellow straw and chopped up cow manure mulch laid atop, the soil was dark, moist, sweet smelling and loaded with worms. Living soil indeed. Josh and Sandra won the first Regenerative Agriculture award given in the 2016 Emerald Cup and obviously have the master touch.

It was a joy to see the cultivation thriving and to breathe in the heady aromas of numerous herbs and flowers expressing their terpenes as an infusion in the hot sun, even though the girls themselves were not in flower as yet.

The members of the CDFA Environmental Unit seemed suitably impressed with the beautiful and bountiful garden as our MAP group plied them with information. After a quick sandwich lunch in the shade next to the garden, we were off to the next farm, this one in Greenfields Ranch, an intentional community founded in the 70’s on 5200 acres in the forested mountains above Redwood Valley, to the west of Highway 101.

Zig-zagging up dirt roads, through the Douglas Fir, Oak and Madrone trees, across a bridge and gurgling creek, we drove up to the River Taxi Farm with Chiah Rodrigues and her husband Jamie Beatty, who are in the process of applying for a Nursery Permit. They are both second generation cannabis farmers and amazing breeders of unique genetics, as well as the founders of Mendocino Generations Alliance, a group of 60 permitted cannabis farmers in Mendocino County.

At the farm there were hundreds of plants in all stages of maturity: hoop houses with countless starts and light dep beds with the black and white plastic coverings rolled up at the base of the hoops, some already flowering in June. There was sort of a Luther Burbank feel to the operation, in that out of the hundreds and hundreds of plants, only a chosen few would be selected to be cross bred with other chosen few. Jamie has kind of a “mad scientist” gleam in his eye when he talks about the cultivars he has created and how he keeps evolving them.

By 7pm, having been in the hot sun all day, we were exhausted. Our MAP group had peppered them with information and opinions and gotten to know them just a bit. It had been a worthwhile interaction with the group from Sacramento. We went our separate ways for the evening, to reconvene in the morning back at Yokayo Ranch for the morning work session.

After breakfast, we started with a brilliant demonstration by Eleanor Kuntz showing how to collect live plant herbal specimens, place them between chemically neutral thick cotton paper sheets, then bind about 20 samples in a tight sandwich package between small boards to dry and preserve the whole plant. Or, in the case of Cannabis, a foot long branch. She recommended gathering the cannabis sample early in the flowering cycle. Otherwise, the bud can get too big and moist to flatten out and dry. This is a very important step in documenting and correlating cultivar genetics with climate. 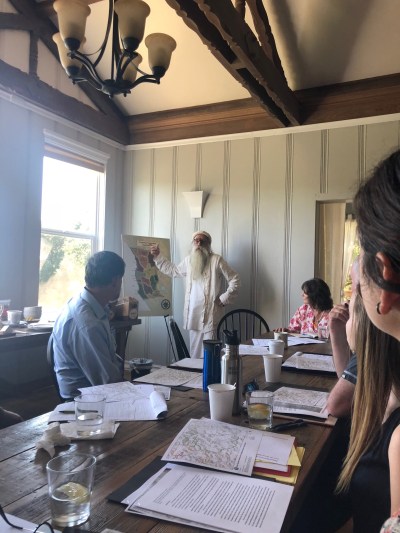 We all sat around a large work table and began to discuss what potential minimum requirements to earn an appellation of origin designation. At a minimum, the MAP position is that the plants must be grown in full sun, planted in the ground and cultivated with organic or biologic methods. Additional qualifiers and standards would be determined by each petitioning region.

Other points of discussion were about how to collect the data to substantiate a claim for a separate appellation within a region. The concept turns around community-driven research. This means gathering information from operating cannabis farms by interviewing the cultivators about weather and site characteristics, establishing mini-weather stations on their land, taking soil and water samples for analysis, using track and trace to collect information on cultivar genetics in order to compare potency and yield across various cultivation zones.

As the discussion went on, I noticed that members of the CDFA Unit sometimes used the words Cannabis Cultivation Areas, (CCA), which sounded to me too much like the American Viticultural Areas (AVA), which are Geographic Indicators. These are different from Appellations of Origin based on the concept of Terroir, which have many more associative qualifiers relative to the place. Terroir declares that the environmental specifics of the immediate locale of origin and production as well as the established culture of the sub-region are determining factors in the essential quality of the product itself.

The CDFA Team couldn’t help but comment about the passion of the MAP members. They made it clear that they were still very much in the information gathering stage, and weren’t required to have their rules final until 2021. It was clear that we had made an impression, as even after the meeting was officially over everyone stood around in animated conversation for at least another half-hour.

Over the next couple of years, of course other powerful stakeholders will make their voices heard, but now we know the people who will make the rules and they know who we are. The conversation has begun and I think the message about how important this issue is for the small artisanal cultivator was conveyed.