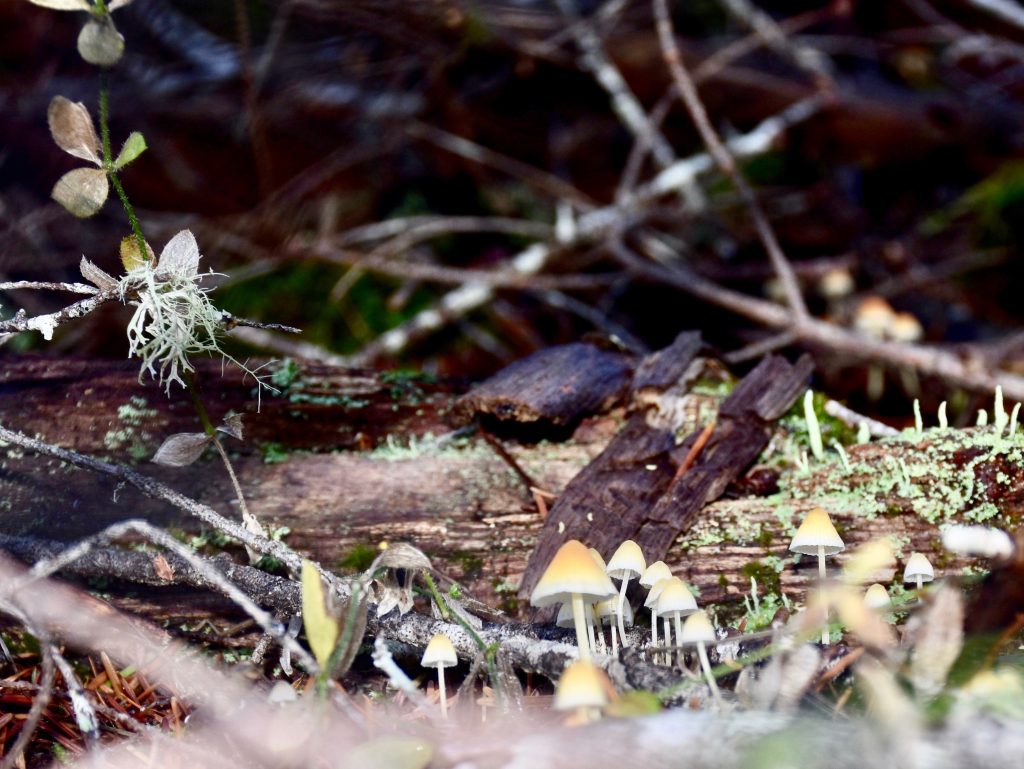 It’s snowing up here in the mountains. We expect to get snowed in, as they are predicting up to 12 inches at 2500 feet elevation and we are at 2600. The Ganja Ma Gardens, source of Swami Select, are all white, just after we finally got all the beds covered with old straw, oak and doug fir wood chips topped off with oak leaves. They look all tucked in and cozy for winter. We didn’t get all the other small plots seeded with alfalfa and clover like we planned, but that will be done when the snow melts. Some was seeded earlier, but the wild turkeys came and ate every single seed. I mean every single one. Supposedly, if you roll the seeds in powdered clay before broadcasting, the birds won’t eat them.

Living here at the edge of a meadow bordering the wilder land, one tunes in to the rhythms of Nature, the changes of the seasons that determine the day’s chores and projects. Winter is time to plan, to dream, to study and prepare for the planting season coming soon.

Seems like I’m always on a learning curve. It keeps the brain alive. Now the subject is “Living Soil” and all the micro-organisms that are alive in the earth. This is known as the “soil food web”.

It turns out that there is a whole interconnected system of diverse organisms that live in the soil and symbiotically depend on each other.

The Fungi, for example, create white lace like tubes (hyphae) that are miles long and connect the root systems of many different species of tree. The trees in turn, exude sugars out their roots which feeds the mycelial fungi. Bacteria are also involved as well as algae and slime mold. There are Protozoa, Nematodes, Archaea, Arthopods, earthworms, gastropods all at work here. It truly is an entire ecosystem living in the soil which is capable of communication between the various diverse elements. A nutrient/chemical/water driven Internet.

Don’t worry, I had to read up on each one of these organisms too. It’s all new to me. I was given a great book explaining all this in layperson’s terms: Teaming with Microbes, The Organis Gardener’s guide to the Soil Food Web, by Jeff Lowenfels and Wayne Lewis. It is fascinating reading.

There is an ancient metaphysical truth: As Above So Below. Usually when I see this statement I think it refers to the interrelation between the earthly realm and the heavenly realm. That is, the human world is the “below”. Now it is clear that the below is also in the soil, that it is its own “living realm” with its own level of consciousness, interrelatedness and communication system. All of these microorganisms are aware both of themselves and of their kind as well as of all their neighbors of different species.

When you stop to think about it you realize that no one fertilizes the forest. No one waters it or plows it up to turn the soil and pulls the weeds. The trees in the woods are part of a closed system that connects the sun, the air, the water and the earth. The sun stimulates photosynthesis so the tree makes sugar which is exuded from the roots. This feeds the fungi. Bacteria and earthworms digest the leaves and needles and branches that the tree drops, and then the fungi delivers the resulting nutrients (Nitrogen) back to the tree. That’s only part of the story, I still have 11 chapters to go.

The Soil Food Web is very complex, but it works. Unfortunately, modern commercial Chemical agricultural practices are the very methods that are killing the numerous species of organisms that normally live in the soil. Even just plowing the field, it seems, destroys the delicate balance and connectedness of the microbes and macrobes which are the living parts of the soil. These are the parts that breakdown the nitrogen, potassium, phosphorus, copper, manganese, magnesium, iron, etc., that occur in nature, into compounds that the plant can absorb. Adding these elements as powders or in liquid form through irrigation, actually destroys the natural food chain. So the newest agricultural methods are actually the original way: the way of Nature.

Once again it becomes clear that Cannabis is a great teacher. Growing the sacred herb leads us to discover the true method nature has of growing for purity and fertility. This is sometimes called the No-till method as it lets the soil do its own thing. Other terms are Regenerative or Remedial Agriculture or even probiotic farming. Whatever the name, it represents the way forward for farming that can help revivify the earth. Cannabis raises our consciousness of the magical way of Mother Nature. We feel the blessings of Feminine genius from the plant and the planet.