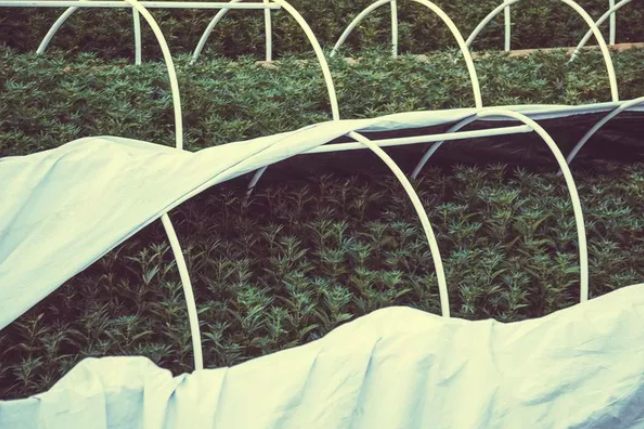 This piece was originally published on MERRY JANE on November 29, 2017.

Sometime around 2010, a few smart cannabis farmers in the Emerald Triangle figured out a technique to boost their poundage by adding an extra “season” to the growing cycle. They developed a light deprivation technique that basically tricks the plants into thinking it’s already the autumn season by pulling tarps over greenhouses to simulate an earlier sunset everyday, which pushes the plants to flower. While this style of cultivation produces smaller yields, growers can harvest their crops in July, leaving room for a standard harvest of full-term/full-sun plants in October, as well. 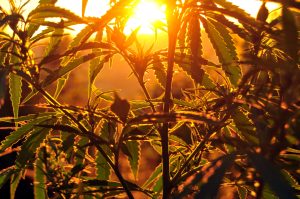 The original “light dep grows” were simply hoop houses with black and white plastic tarps dragged across them to reduce the daylight hours. Seven years later, growers can order light deprivation greenhouses up to 30′ wide x 120′ long x 15′ high with automated blackout systems, built-in ventilation, and environmental controls, though prices start at around $60,000. Most light dep farmers still configure their own set-ups, which means punctually pulling the tarps every morning and evening. However, many larger growers — especially in Humboldt County — have invested in the fancy and expensive ones.These are sprinkled across the hills of the Emerald Triangle. In the early autumn, when the previous year’s sungrown crops are already smoked up and gone, light dep steps in to carry the cannabis market through the year until it’s time for sun grown harvest season.

Over the years, the quality of light deprivation bud has improved significantly, as farmers have figured out how to finetune their tarp growing techniques. Kevin Jodrey of Wonderland Nursery and the co-founder of The Ganjier — the cannabis industry’s widely respected platform for cannabis cultivation advice — is one of those cultivators. Kevin and friends first produced the Golden Tarp Awards in 2014 to recognize the farmers who grow the best flower using light dep.

The 4th Annual Golden Tarp Awards ceremony was a couple weekends ago (November 18) at The Mateel Center in Redway, a tiny town in Humboldt County. While the event has progressed into a professional affair, it retains that down-home feeling of hanging with local farmers. Yet for the first time ever, this year’s Golden Tarp Awards was live-streamed across the globe.

The Mateel Center was built by the folks who started the Reggae on the River festival, and they used profits to create the community center in the heart of Southern Humboldt. At this year’s competition, there were several local collectives with booths featuring their flower and other products, as well as a few trade show-style companies displaying new trim machines or compost tea brewers. But this was nothing like a massive trade show; there wasn’t a suit in sight. These were the local mountain folks, maybe about 800 of them, down from the hills to share their harvests. Most gathered outside in the wintry sun at various dab bars or just smoked joints and hung out with fellow growers. Others were inside absorbing knowledge from the brilliant line-up of panelists at the Golden Tarp Awards’ “Knowledge Sessions.” 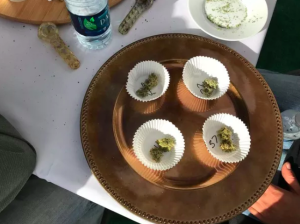 Meanwhile, 25 hand-picked judges were gathered at a house about half a mile from the Mateel Center. The contest was structured in a unique way. The entries were divided ahead of time into four categories based on terpene profile: Fruit, Floral, Earth, and Fuel. Then the four samples tested with the highest THC from each category were entered into the competition, making a total of 16 entries to be judged over a four-hour period based on looks, smell, taste, and effects.

Volunteers distributed trays to each judge (or set of judges, as they often come in pairs), starting with the Floral group. Each tray had four samples of about two grams each in corrugated cupcake holders that had the entry numbers written on the bottom. Of course, the entry numbers the judges were given were entirely different from what the entrants were given, to ensure a blind, unbiased tasting. The judges were free to test the cannabis in any fashion they preferred. Some used pipes, others rolled joints. The same sweet volunteers brought small plates of healthy snacks around throughout the marathon test session to keep the judges’ palates refreshed. It was all very civilized.

All 156 samples had been tested by Pure Analytics ahead of time, and, as Kevin Jodrey said, “There was a brutal attrition rate from yeast and mold this year. It’s from a rise in the use of enzymatics too late in the season,” he explained, referencing the products with good enzymes in them which are used for foliar sprays to control mildew. 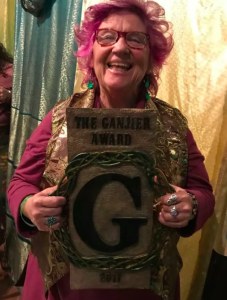 At the judging station, I saw Pearl Moon and Dr. Joyce Centofanti, the beloved Bud Sisters, mulling over a floral entry. These two women are integral to the scene — Pearl is the founder of Humboldt Cannabis College and Dr. Joyce, a fine artist, made the official Golden Tarp Award statuette. Both have a history of judging, and they really know their stuff.

“Ew, this is yucky,” snarled Pearl as she tasted a freshly rolled joint. “It smelled OK, but I don’t like this flavor at all!” she exclaimed. On to the next sample. All in all, though, she felt the quality of entries was up this year. “Let’s face it, full-term bud is more developed, but some of this light dep is pretty darn good,” she said with a satisfied chuckle.

At another table the Certified Dank judging team — Erica Edwards, Caitlin Podiak and Ed Bentzen — were living up to their reputations as true pot snobs. Caitlin expressed that she really always prefers full-season flower, “unless they are grown by Jesse Dodd.” Yet she still appeared to be getting very stoned! As the crew marked their judging forms, you could practically see their thought bubbles through the smoke. Caitlin later said that testing the Fruit and Floral strains, which generally are sativa-dominant and provide an up sensation, before the other terpene groups created a real buzz. “Thank god for the “Earth” round, which is grounding,” she laughed.

Judge Rachel Schmidt, owner and magical chef of “Baked in Humboldt,” agreed. “First of all, I’m not a big Floral or Fruity girl — I like those subtle, earthy kushes,” she stated, before moving on to the next tray of buds.

Meanwhile, back at The Mateel, the Knowledge Session panels were wrapping up. The final one of the day, concerning the recently-released California State Cannabis Regulations, had the audience captivated. “We can still fight it,” proclaimed attorney Omar Figueroa from the stage, “The rules are not set in stone.”

But the awards were the centerpoint of the day. When the judges were finished sampling the 16 finalists, they were requested to write only their top choice on the final form. Typically, only the first-place winners in each terpene group are announced, but this year the judges also spotlighted two other entrants as a second-place tie because their bud was so darn good.

Kevin Jodrey, in his endearingly-thick Rhode Island accent, called up all sixteen finalists. “It feels good to finally get some recognition in life,” he said. “We always had to hide from it or go to jail before.” Then he announced that Emerald Family Farms, a Humboldt County Cooperative with several farms under its umbrella, took first prize with a “Gorilla Glue” strain grown by Gold Country Cannabis Farm. Their flowers hit the “sweet spot,” as Kevin called it — the perfect balance of terpenes and cannabinoids. The crowd responded with fervent shouts and applause.

The crowning glory of the day was a special award given out to honor an unrecognized figure in the cannabis community for their dedication and devotion to the cause. With a grand flourish, Jodrey announced “Pearl Moon of Humboldt Cannabis College” and the audience was thrilled. After all that judging, Pearl did appear quite high, but she managed to collect her award and look radiant in her pink hair.

There’s no doubt that the quality of light deprivation-grown cannabis will only keep improving, as long as it’s grown with organic, pure methods by master growers in the Emerald Triangle. Last year’s Golden Tarp winner also went on to win The Emerald Cup. Stay tuned for what will happen at this year’s Emerald Cup, which is coming up in early December. We’ll be there.

For more on the Golden Tarp Awards, visit the festival’s website.