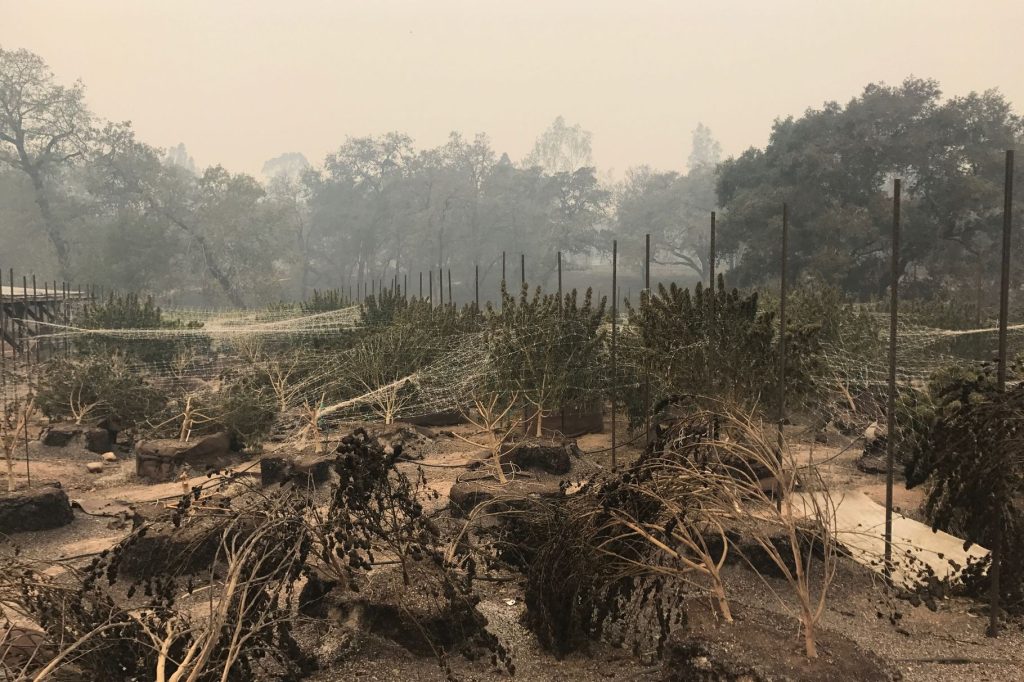 Although they have been referred to as the Wine County Fires, Northern California’s Cannabis Country has also suffered a severe blow. Tens of thousands of acres have been burned in Redwood and Potter Valleys in southern Mendocino County. Here and in Sonoma and Napa Counties many houses and farms have been destroyed and innumerable cannabis gardens incinerated. In the burn areas, even if a crop escaped the flames it might well be unusable because of smoke and toxic ash pollution.

We know several people who lost everything, home and crop. They now face dire economic hardship, especially considering they have recently spent all their funds applying for permits and coming up to code compliance. This is a tragic loss for the community at a very vulnerable time. Most farmers nowadays live from harvest to harvest, with little or no savings. Most of us have no fire insurance because we live at the end of dirt roads and have un-permitted buildings. Nor can we get crop insurance, because in California cannabis plants are not legally considered a crop, but rather are defined as an agricultural product.

Our community will take care of its own. Fundraisers are being organized by CGA (California Growers Association) and SFA (Small Farmers Association) and other groups to benefit cannabis farmers who are fire victims. Our prayers go out to those who have suffered losses. We urge you all to donate and help however you can. Like our fearless ancestor pioneers, we will rebuild and carry on.

At the New West Summit Conference in Oakland last Saturday Steve DeAngelo, CEO of Harborside Health Center, gave a heart felt and moving speech on the stigma still associated with those in the Cannabis business. In a dramatic presentation, he honored the history of the small farmers, and how we wouldn’t be here without the cultivators. It felt as if the fires had stirred the embers of respect for the farmer at long last.

The fact that many farms and crops worth millions had been lost seemed to finally bring the precarious position of the small pot farmer into the spotlight at the Summit. For all the innumerable newbies hovering around our industry, it is time for all those in the “don’t touch the plant category” to acknowledge that without the “touch the plant people” there isn’t anything to sell. The small farmer is literally on the ropes and about to expire if care is not taken for our survival.

The curious irony is that while the new state laws make cannabis consumption much more legal for everyone else, all the new regulations make it much more illegal for the growers and manufacturers, especially for the majority of growers and others still hoping to survive in the illicit market. But even if one is trying to do it right, the constantly changing avalanche of new rules means that almost no one will really be able to comply with each and every stipulation. There are so many little things for which one can be busted by the many different county and state enforcement agencies.

The State Water Board, part of the State Environmental Protection Agency and the Department of Fish and Wildlife (seemingly a law unto themselves) are being particularly strict, more restrictive than for any other form of agriculture. They seem to still be in a punitive stance regarding cannabis cultivation, somehow blaming us for the drought of the previous years. It appears that their goal is to drive us out of the mountains by imposing page after page of stringent limits. These agencies’ proposed regulations and rulings would prohibit growers from using spring water and pond water originating on their own land to irrigate a commercial cannabis crop.

Interestingly, the Farm Bureau is not on our side either, because it is made up of cattlemen and vineyard owners who fear that the extreme rules for cannabis will be carried over to them and the rest of Ag. That’s why they prevented the classification of cannabis plants as a crop. These groups along with the lumber companies want to forbid the growing of cannabis on Range Land because that will drastically reduce the price of Range Land, enabling them to buy up former cannabis growers land cheaply for their own expansion.

It is another irony that although Nor-Cal has the cleanest air water and soil capable of producing the cleanest purest cannabis medicine it is exactly here in the mountains that they do not want us to cultivate, even though our environmental impact is minuscule compared ecologic disasters perpetrated by the lumber, cattle and wine industries. They wish to drive us onto agriculture land where agro-business has polluted the water, land and air and growing pure contaminant-free cannabis flowers will be difficult and expensive, if not impossible. All these forces arrayed against us are joined by environmental protection groups and hunting/fishing clubs. They all want us out of the woods so they can use it for their own purpose.

There has to be a positive note here somewhere! As Jerry G said, “We… will… survive! we will surviiiive!” People need the sacred herb to ease the burdens of life and pain in these times. So we must work and strive to make sure that “Cannabis of the people, by the people and for the people shall not perish from this earth!!!