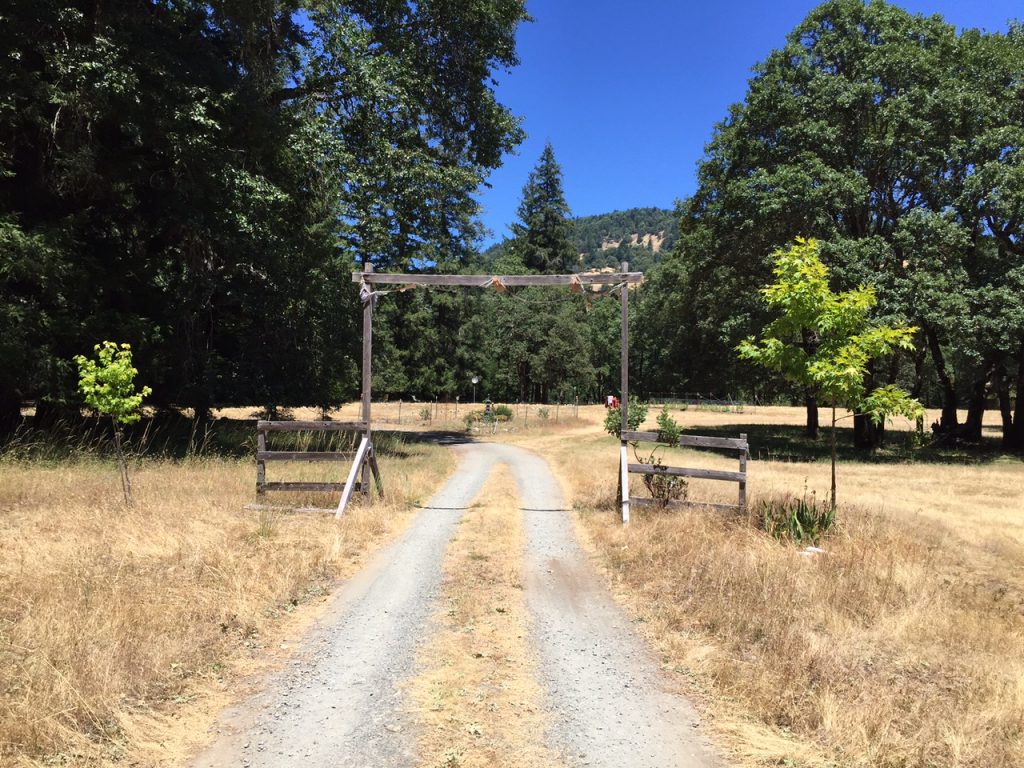 Today is a very lucky day: 7/11- July 11th – and the 13th anniversary of the day we purchased our ranch here in Mendocino. That doesn’t seem like so very long ago, yet the changes that have happened since that blessed day are epic. It was a miracle we even found this spot. Swami and I were visiting with our teacher in India when he asked me what I wanted to do with my life at that point. I expressed a desire to create a sanctuary in the mountains somewhere in California. When he asked me how I was going to do that alone (as Swami was living in India at the time), I told him I had no idea, but said Swami can build anything. Then he looked at him and said, “You have to go help her.”

The rest is history. We returned together to California and took up once again our hunt for the perfect piece of land, the one which would call out our names and open our hearts the minute we saw it. We had been actively looking for our “stan” (or place of our home or tribe) for many years – at least whenever we were in California. There are many wonderfully beautiful corners of this golden state, so we focussed on areas where we felt at home and there was at least one good health food store in the vicinity. We drew a 200-mile radius around San Francisco and decided it would have to fall in that area.

As fate would have it, one day I got an effervescent e-mail from a real estate agent we had met while looking at land around Laytonville. I had already spent a couple of years living in this area of northern Mendocino County and Swami had visited on sabbaticals from India. We were naturally drawn to it. Our people were here. There were lots of friends who had also traveled to Asia back in the 70’s, and others we had met through Tim Blake at Area 101. So when realtor Loren Strider sent me that enthusiastic e-mail about a new piece of land on the market just north of Laytonville, we listened. I imagine it also had something to do with the seventeen exclamation points he put after each sentence!

For some reason I can’t recall, I was unable to join Swami that overcast day in spring of 2003. He drove alone from San Francisco, straight north up Hwy 101, to Loren Strider’s office. From there they made the trek to the land. The photo Loren had sent us simply showed a tiny cottage on the edge of a big meadow under some oak trees. It was obvious that was all that was there on the land. This wasn’t even a fixer-upper. This was a start from scratch project. It looked interesting, but I can’t say I felt it merited so many exclamation points.

When Swami returned to the city, he calmly told me it was really kind of nice, a big open space, funky tiny cottage that they couldn’t get into, and not much else. He also told me there was no bridge over the creek to enter the land, and that had been a hairy 4WD truck ride across the rushing waters. It had been a wet winter typical of the pre-drought years. Yet he encouraged me to take a drive back up with him a couple of days later, just to see it.

I find it incredible how well Swami had hid his excitement, because he didn’t want to cloud my judgment.  We drove  up to Laytonville, piled into Loren’s sturdy truck and headed into the mountains. The drive up and down the muddy hills of Mendocino seemed to take forever that first time, especially down into the deep valley we now call home. It was like we were entering the forest of no return , especially when we had to ford the surging stream to get to the other side. I closed my eyes and said a mantra to Ganesh (the remover of obstacles) as we splashed across – phew! At the point I wasn’t  convinced I’d ever want to do that again!

We drove a short ways onward, around a few more bends and along a narrow cliff. Just when I was about to say, “What the hell are we doing here?” it all opened up. Before us lay a giant meadow dotted with ancient oak trees and towering Doug firs. It was breathtaking. Around a wide curve was a wobbly old fence and gate with a sign that read, “Gopher Flat Ranch.” That’s gotta be the worst name I have ever heard of for a ranch, I thought to myself, but a name can always be changed. The land spoke my name and opened my heart instantly. It was my “stan”, we had found our home. All I could say was, “Wow.”

Swami knew immediately what that exclamation meant and we were sold. After a few months of miracle negotiations, Gopher Flat was signed over to a new life with new caretakers to love her. I feel awkward saying we “bought” it and it is “our” land now – because we all know we can’t  “own” the land. But we are the proud stewards, and so lucky to have found our place. It as been 13 years of creating and playing and building and learning and growing and sharing and loving – all equally important. I thank our teacher who sent us on the path at the exact right time. I thank Swami for sharing this creation with me. I thank The Land, The Water, The Air, The Trees, The Animals, The Birds, The Fish, The Reptiles and even The Insects. We are so very blessed.